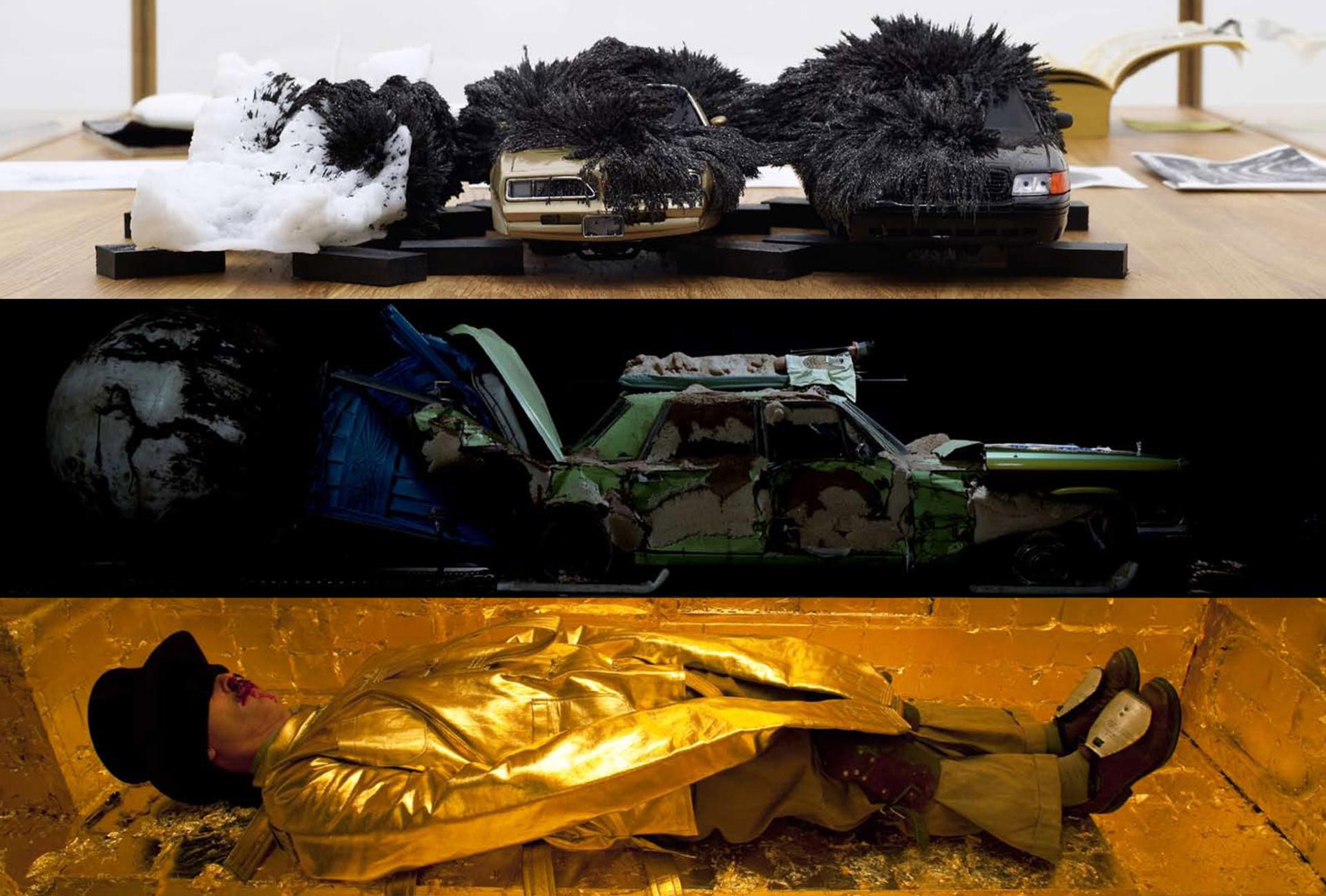 In Egyptian mythology, the human soul has physical as well as metaphysical properties, of which the Ren is the immortal spirit-name whose continued utterance ensures perpetual life after death. Similarly, the Khu represents a kind of ghost animated in the afterlife only if the proper mumbo-jumbo spells are cast at the deceased’s funeral.

Those with even a superficial familiarity with Matthew Barney’s previous work will find his attraction to this source material easy to spot: the Egyptian obsession with procession and arcane hierarchy; the ubiquitous human-animal composites; magic rich with ritual as the overriding concern of daily life; and – perhaps above all – a preoccupation with immortality and the forestallment of bodily desiccation. As Barney himself has commented, “Zombie films never appealed to me because they were too ‘dry.’ I was repulsed by the lack of moisture in those characters.” Mummies, however, get a pass.

Inspired by the American novelist Norman Mailer’s Egyptian crypto-porn novel, Ancient Evenings (1983), Barney and his longtime composer Jonathan Bepler have taken the mystical yearnings of an ancient Nile civilization and repurposed them into a multi-year, seven-act opera collaboration of the same name. The first act, REN, saw the cortege, public embalming, and shredding of a Chrysler Crown Imperial. This took place, not insignificantly, in the kingdom of the car (and broken dreams): Los Angeles.

“The Ren did not belong to the man but came out of the celestial waters” — Normal Mailer, Ancient Evenings, 1986

In late 2009, Barney staged the “prologue” of the second installment, KHU, a ceremonial funeral/submersion of a Pontiac Firebird in the automotive necropolis of Detroit – the destruction of the Imperial having cleared the way for the emblematic (re)incarnation of its brand-brother, the Firebird. Barney returned the Chrysler’s Ren, it seems, to the Celestial Waters of River Rouge.

In Ancient Evenings, Barney has recast the Egyptians’ fanatical interest in corporeal transformation. The North African dynasty’s fascination with wigs, cosmetics, masks, linen wrappings, and – after death – the painstakingly sophisticated mummification process that prepares the body for eternity, is here transformed into a pageant, which succeeds in bringing Barney’s older artistic investigations, DRAWING RESTRAINT and the CREMASTER Cycle, into union, and perhaps to a close.

Mike Bellon, Barney’s producer and studio manager, revealed that the actual performance of KHU “would be witnessed by a live audience and take place in Detroit. We’re hoping that this will happen in the fall of this year, 2010.” One goal of the live-action project has been to get away from the cooler veneer of Barney’s fully produced films.

Barney himself elaborated in an interview with director David Cronenberg about the thinking behind his selection of different vehicles as the opera’s protagonists, explaining that “one of the reasons why we chose this particular car that we’re using [is that] it’s the surviving car from the demolition derby from CREMASTER 3.” The Chrysler has been tasked by Barney with an afterlife, linking his previous films to the opera. “The difference with this project is that the chapters are being done in sequence, and it relates to one text,” Barney continued. “So I’m hoping that it will have a different kind of legibility than those films did.”

It feels as if Barney’s mythic imagery and existential aesthetic exploration have found currency again in Ancient Evenings: this time as an examination of contemporary politics, which plays out in the remaining opera acts and their paraphernalia.

While Barney’s subject matter has broken free of his closed-loop aesthetic by involving ostensibly more politicized imagery (a shift that began with the artist’s 2005 whaling epic DRAWING RESTRAINT 9), his art in practice still retains the call and response logic of supplementary illustrations and vitrines, which storyboard the larger sculptural, cinematic, or performance-based work. Here, the scratchy lines of graphite portraits (of Egyptian gods, of various religious motifs, of Mailer himself) are penciled onto open copies of Mailer’s Ancient Evenings, and convey the kind of neurotic energy that is the through line for much of Barney’s art.

The set of KHU finds Barney also inhabiting his escape-artist Harry Houdini avatar again. In 1906, a handcuffed Houdini famously jumped from the Belle Isle Bridge into the Detroit River, a performance riffed on by a blindfolded Barney in a gilded straightjacket, tucked into the driver’s seat of the carefully prepared Firebird. Before the Firebird starts its descent into the river, Barney first appears as if dead, lying in state on a bier of golden bricks in the Church of St. John Cantius. The bricks recall the splendor of Egyptian tombs, while also referencing a work by the installation and performance artist James Lee Byars, ironically titled The Death of James Lee Byars, which was also about “practicing” death.

Ever the clotheshorse when performing, Barney here wears a mille-feuille of Byars’s ringmaster top hats, which evoke the nesting burial masks of Egyptian mummies. As with the best of Barney’s work, the image is a layered combination of the vaudevillian and the mysterious. His showman’s spiritual revivalism draws on deep myth and contemporary aesthetics to reveal a sophisticated commentary on the performance and process of producing art today. As Barney explained, “part of the intention with this new project is to limit the production time, to limit the budget, and to try to make a more immediate piece that’s not mediated.”

While his previous films have a sometimes chilly, luxe quality, Ancient Evenings feels more personal in comparison. Grimy even, but somehow intimate. “As each performance will take place in a different setting, in a different country, a lot of the music comes from things indigenous to that place.” Barney has found a trove of ravaged Americana that translates those jeweled anthropoid coffins of the valley of the Kings into his own steel and leather soul-sarcophagus. The grim industrial setting and the Pontiac’s climactic plunge into the contaminated Detroit waterway emphasize the performance’s connection to the United States’ moribund manufacturing economy.

While the car itself founders into the riverbed, unseen, its symbolic rust and rot were relocated in miniature to KHU’s gallery exhibition, where the different vehicles were presented in a maquette life cycle: from waxy, protoplasmic Imperial, to golden Firebird, to black 2001 Crown victoria sedan. The cars, crusty with magnetized iron filings, are both empty icons of former American industrial might as well as its clear parallel: the rapid swelling and gradual senility of testosterone-laden car culture. From hot muscle, flashy with life does a man – and a society and perhaps an art form – descend into impotent pragmatism with a foot in the grave.

If Barney’s analysis of societal woes seems out of character, it does fit in to the spiritual and ecological “anemia” (as one critic of the piece put it) confronted obliquely in the CREMASTER Cycle, and ultimately bang-on in DRAWING RESTRAINT 9. By asserting a place for spirituality in contemporary art – even an ancient spirituality whose deepest meanings are lost to us – Barney’s opera has begun to rescript the possibility for a Phoenix- (Firebird?) like renewal in a stagnating global culture.

After the upcoming Detroit KHU premiere, Barney plans on doing a series of performances in New York City that would encompass the next few of acts of the opera, bringing his latest project back to his old creative
stomping grounds.

“I certainly believe in an energy that lives on and functions like some sort of adhesive between living people,” Barney has said in the past when asked about his personal investment in the more mystical elements of the project. In order to make the journey between this life and the next, the Egyptians held that vital cultural memorabilia and, above all, the Ren, through the same ceremonies that invoke the Khu, could be preserved. Their funerary art was inseparably connected to the belief that life continues after death. With Ancient Evenings, Barney signals a subtle agreement.

SANAA: Our Future Could Live Here