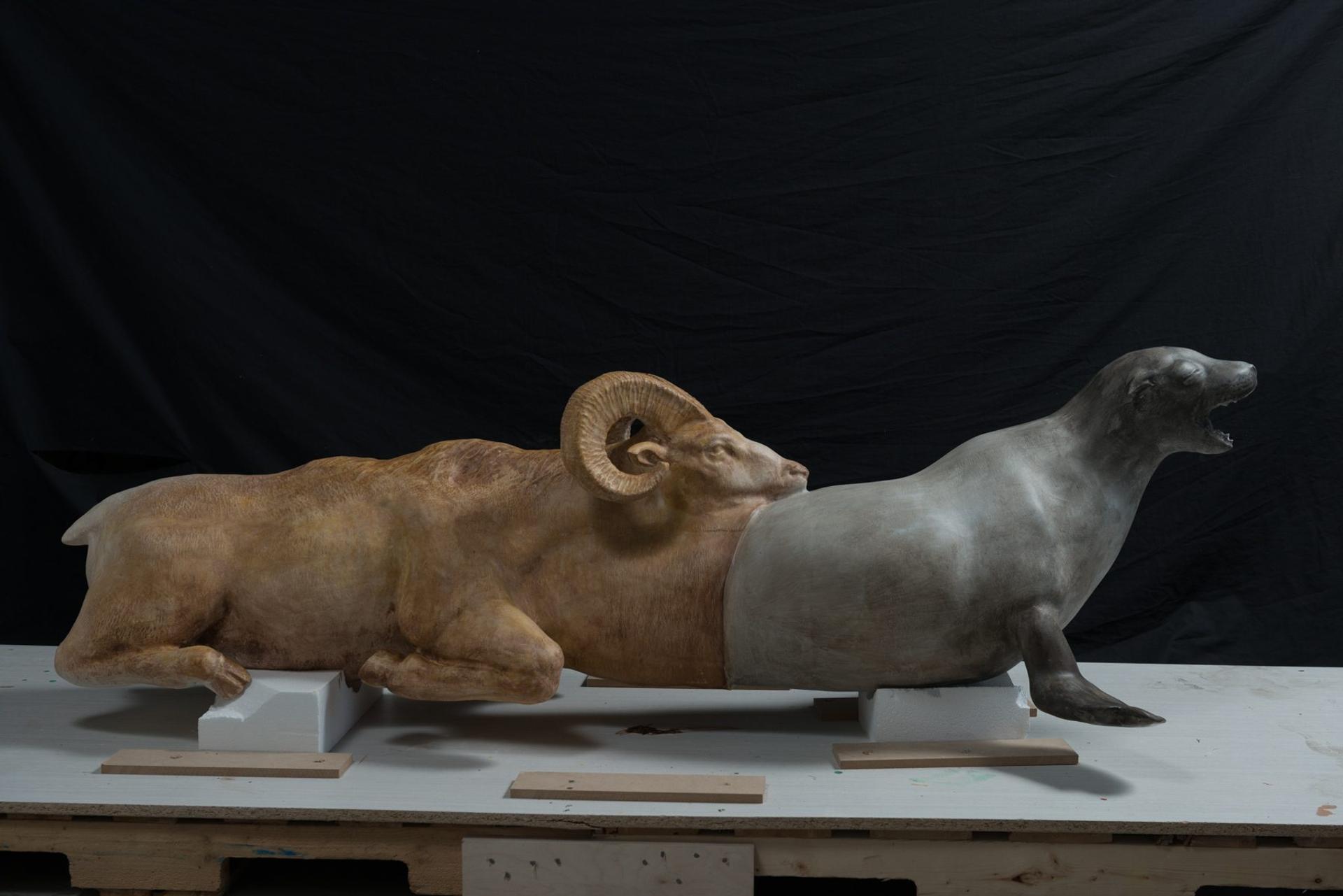 How (and why) the Canadian digital artist’s obsession with an internet subculture based on eating or being eaten reveals an “incredible analogy for our contemporary condition.”

After the heavens and earth were created, but before mankind was given fire, the Titan Chronus decided to eat his children Demeter, Hestia, Hera, Hades and Poseidon. His son Zeus escaped his maw, however, and managed to rescue his brothers and sisters, after killing his father and disgorging his belly.

In doing so, he created one of the first examples of what the internet, in its infinite /awful / blistering wisdom has termed “vore”: a sexual fetish based on the fantasy of eating, or being eating, someone, or something. Following in the footsteps of Goya and Rubens, the contributors to sites like sub-Reddit r/Vore or vorefan.com depict the pains and pleasures of being entirely consumed by a huge fictional entity, usually in cartoon form. “Vorarephilia is one of just a few fetishes that exist almost solely as fantasies: the process of being consumed would be very painful, if not impossible for most people,” psychologist Dr. Mark Griffiths explains. “It’s an entirely art-focused, fantasy-based fetish: a subculture which creates its own conditioning.”

Canadian digital artist Jon Rafman came across this subculture during a deep dives into the trenches of the internet, and it stuck with him. His previous works have often focussed on the meeting of immaterial screen fantasies, and the sordid realities of our material world. After all, technological ruptures are like Gods (and revolutions): they consume their young.

His latest, made with co-director Samuel Walker, sees visitors to the Berlin Biennale strapping on Oculus Rift headsets to plunge into a drowned universe. The actual world thrusts stubbornly into the virtual, though: scattered through the space, a balcony overlooking the Brandenburg Gate, are weathered sculptures of seals squealing with pleasure as they are eaten by rams, or a gorilla, head back in ecstasy, being eaten by a deer.

Speaking of consuming, virtual reality is so interesting because it absolutely goes against the rule of technology: it’s the first technical innovation in almost three decades which doesn’t make it easier to check your email. It’s actually the opposite: a full, immersive experience we can’t escape.

Jon Rafman: Precisely. There’s something violent and arresting about it. And I think that that’s why it’s going to be so successful and there’s so much desire for it. It makes you suspect of it too: do we need to be blindfolded and have our entire visual field completely occupied to focus on something any more? We have to have something projected into our eyes to have that immersive experience that 19th century landscape painting once gave us. If cinema is considered the media of the 20th century, maybe this is what we need to stop being perpetually distracted.

That said, VR harks back to that earlier idea of cyberspace as a separate, anti-physical universe. It has seemed redundant in recent years, but VR reboots it.

The thing about the early internet is that many of the pioneers of “cyberspace” were obsessed with virtual reality, as depicted in Gibson novels and so on. In the 90s, there was so much talk about VR, though the technology just wasn’t there yet. So in a way we’vebeen prepared a long time for this technology. People are almost shocked it has taken so long.

Your work adds a haptic aspect to VR. You used the word violent: could you expand on that?

We’re approaching the next layer, where you can both escape from reality both optically and haptically, through touch. You have to take it seriously, though: it’s not just a kid picking up a video game. These things are tempting and seductive, because there is something inherently there that should be critically looked.

There’s incredible seduction in escape, especially when your world is terrible, and now technology is at a point when basic things like touch can be formed as simulacra. It begs the question: “Why not?” If your life is so terrible you can have a better existence in these [fictive] spaces, why not?

There’s two types: hard vore and soft vore. Hard is literally ripping apart somebody, dealing with flesh [and the means of eating it], tied to horrific scenes of animals and monsters that rip you apart and devour you. But what’s depicted [in my show] is soft vore, which appeals to me because it’s almost treating them like cartoon characters, where they are malleable in the ways that their bodies can stretch.

I like looking for things that you don’t have a preprogrammed response for: something that’s cute and repulsive. Some people find it disturbing, some people find it sexual: it’s something that functions on several different registers. That’s why I chose to have them in the aesthetic of a playground: they look weathered, as they would be in an open museum. At the same time, there’s something about them that looks mythological. If you look at the animals, they would never interact in that way, and you’re forcing these marriages that are… something else.

This is the first time I’ve thought about it, but with my previous work, where I took a painting and used it as a wallpaper on a surface [Brand New Paint Job], or combining Romantic landscape painting with keyboards [You are Standing in an Open Field], it’s about forcing marriage between two things that create a new symbolic language.

These things you’ve mentioned are both canonical, art-historical moments, whereas vore bends firmly towards internet fan-art.

Yes, that’s true: this gives it a mythological quality which I like, and that’s what I tend to do, which is take some ephemeral, marginal subculture, and treat it as if it were some ancient Greco-Roman, hugely culturally important thing.

Do you think it is a hugely important cultural thing?

… And it’s stuck with me, because in the vore scene, I see an incredible depiction of the human condition. At the most basic human level, when you love something to death – even that expression! – you want to devour them, be that a cute kitten or your lover. It even registers on a basic level of existence: that fine line between wanting to either completely immerse yourself in it, or be a tentacle monster and engulf it. It’s not bound to any other nationality or ethnicity: it’s just a desire.

I love the literalness of it. It has all these poetic, symbolic values, but the image that you’re seeing is unambiguous: you can describe it. It’s an iguana swallowing a sloth.

“There is no escape from our bodies rotting – which can be seen as tragic, or not.”

What makes that such an arresting experience to touch?

My work in general works with the material and immaterial: the extreme materiality in the things that have no tactile quality to them. These things are created in a digital environment –even the sculptures are 3D modelled first – but they are about the most physical experiences: being birthed or unbirthed, eating, and sex.

Or my troll caves: it’s devoted to the completely immaterial world of the screen, but is itself a deeply haptic, claustrophobic experience. Even when occupying these entirely virtual, video game worlds, you can’t escape from being devoured by the material world, which is decaying around you. There is no escape – which can be seen as tragic, or not – from our bodies rotting.

Yes. For the moodboards, I sent lots of images of decaying post-Soviet playgrounds. The playgrounds in a lot of former Soviet countries, or Russia, have an eerie quality to them, the way the animals are made, the shapes of the animals. I want to create installations that look like this: it has a tone that’s moody and terrifying, both like modern art and children’s nightmares.