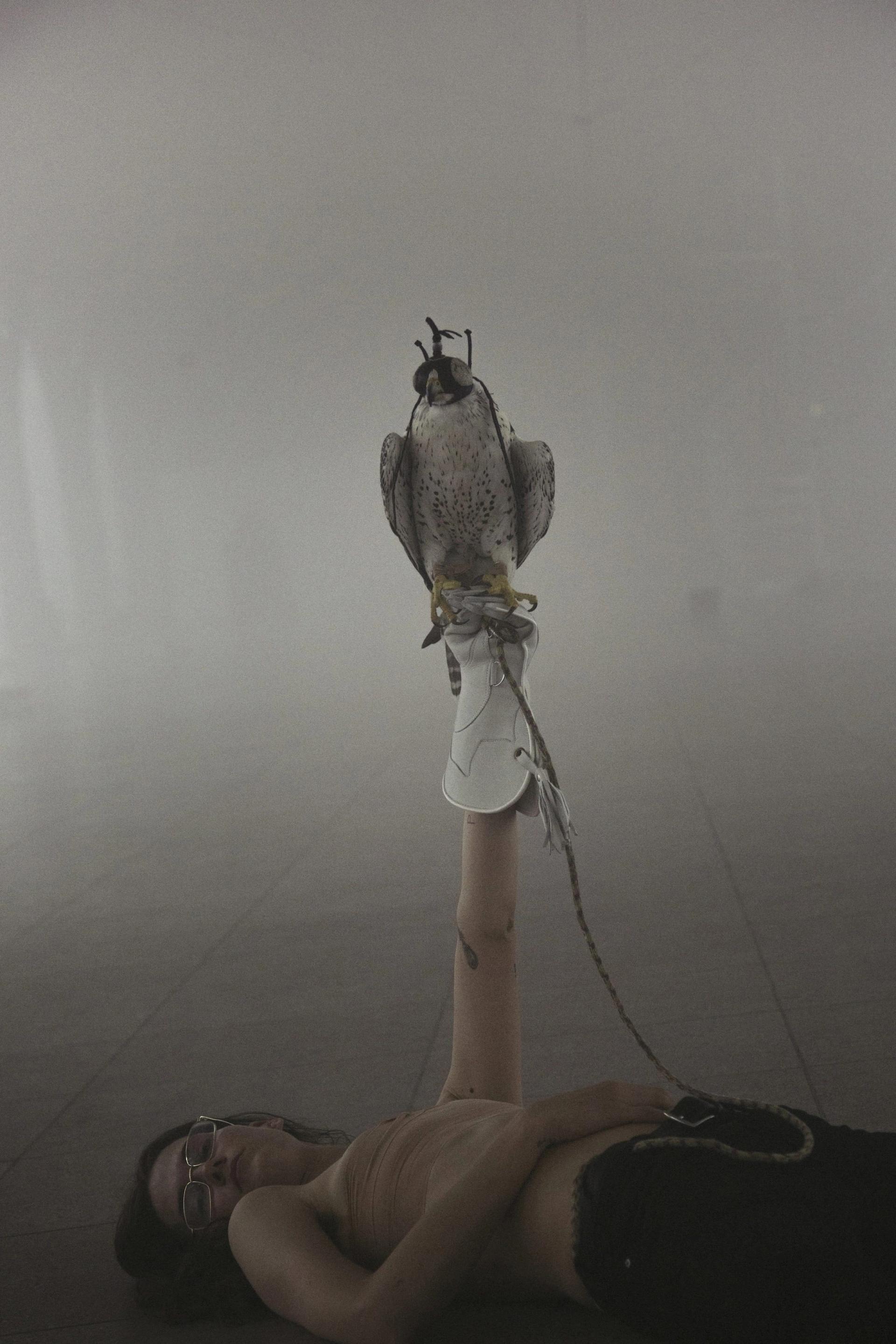 Anne Imhof’s three-act opera Angst is a grand and opaque artwork that drifted across the world like a low-pressure system. Act one saw its performers communing around a fountain filled with water and whisky at Kunsthalle Basel this summer. For act two, Imhof set up anarchic camps in the fog that filled Berlin’s Hamburger Bahnhof during the city’s art week. I visited Anne Imhof’s studio in Frankfurt am Main right before she took off to North America, where she staged Angst’s third act for the Montreal Biennale. Shortly after our conversation, she was announced as the artist of the German Pavilion at next year’s Venice Biennale.

On this sunny Saturday afternoon, the fifth floor is quiet, but in operation. One of Imhof’s assistants bumbles about while she and I drink coffee in the back of the spacious studio crammed with props from her recent performance dates in Berlin. In person, Imhof’s language is coded much like that of her art practice. Angst is her largest project to date, a culmination of motifs that have long recurred in her work. Exhibitions and projects at New York’s MoMA PS1, Cologne’s Galerie Buchholz, or Frankfurt’s Portikus, following her studies at the city’s Städelschule, have consistently united animals and technology, dance and drawing. Even before entering art school, her first ever piece was a duel staged in Frankfurt’s red light district. The boxing match’s rule number one: It had to last exactly as long as the band that Imhof cast kept playing music.

The artist is a painter first and foremost, and her performances are extensions of this activity. This allows her work to exist somewhat detached from antiquated notions of format and authorship. Imhof is not interested in property, only in how it can be shared with an audience and her collaborators, who include her fiancée, the artist and Balenciaga model Eliza Douglas. Informed by a deep understanding of sartorial codes of resistance, the anti-authoritarian Imhof is a master of atmosphere. Her opera especially proposes a message that immediately runs through one’s fingers as they try to decode it. “The movements fluctuate between this viscous mundanity of everyday life and mysterious rituals, between schematic, remote-controlled procedures and individual malfunctions, between uniformity and punk,” says Susanne Pfeffer, curator of the German Pavilion, “On mats and sleeping bags, amid punching bags, baseball bats, and razors, the performers populate the training camp of capitalized bodies and optimized life.”

What remains is a feeling of disorientation. The plain impossibility of simplifying Angst is just what makes for its breathtaking urgency. To drift in its radically decelerated non-action is to experience our lives under capitalism: Paralyzed and defenceless, yet sort of enjoying the ride.

BIANCA HEUSER: When I went to see Angst II, the two camps set up by the entrance of Hamburger Bahnhof looked like a commune. The bongs, sleeping bags, and Pepsi cans. They looked like refuges that a group of people built for themselves because the outside world did not grant them one. The clothes they wore, gym shorts, and an Antifa t-shirt, made them look like …

It has something radical because everybody in there has the agency to let everything collapse in a moment, you know? That creates the possibility for something poetic. People were offended by the blank gazes of the performers. They couldn’t deal with how fascinating it was without anything really happening.

This sense of nothing actually happening is a very real feeling that is easily transferrable to just being in the world.

What interested you in the format of the opera?

I was interested in the different disciplines that opera brings together. Music, a narrative, text, and movement. There are operatic gestures in the piece. The most dominant ones are these variations on the middle finger. This all began with Eliza standing on the top stairwell in Basel, turning in circles while holding her arm out and giving the middle finger, joking that this would be the first thing the viewer would see before even entering the exhibition space. It reminded me of a scene I saw in a London underground. A drunk couple was fighting, and then she got onto the train. The doors shut, and he was screaming, walking after it. He tried to raise his middle fingers towards this train – the train that was already gone with his anger, which was still there. But he couldn’t really bring them up anymore because he was too wasted. This ambiguous, half-raised middle finger became one of the signature movements of Angst.
Angst is an opera, even if it doesn’t reference it in a classical sense. Billy Bultheel composed the music. All of the pieces – the march, the ballet, an overture – are deconstructed into separate tracks. The different instrumental elements were divided onto iPhones, the idea being that people come together or signal from a distance to sync their phones. The dancers hold the speakers of their phones up to the small mics that are attached to their bodies. The tracks can never be perfectly synced. And you can feel it. That’s what makes the music so massive and creates distortion.

This distortion adds to the sensation of Angst.

And what is precision, or perfection, when a perfect structure doesn’t exist to begin with? Falling was a big motif. We built falls into the walks, so you’d see a person crossing the space and fall down. You keep seeing the motif and you see that it’s a very precise fall. For the character of the Diver, we worked on crowdsurfing. The figure has a longing for dissolution into something bigger than himself, a longing for death in a way. So we made an elegant version of that weird, loaded gesture full of pathos.

The longing of the Diver makes him susceptible. The character of the Lover is …

There’s two lovers, actually, who meet each other. Of course, if the Lover is one person, it can be a kind of difficult situation. She meets herself halfway through the piece. It’s not the other she longs for, it’s herself.

These roles were not assigned to the actors to be performed all throughout the piece. Instead, they were shared bet-ween them and traded over time. Their qualities consequentially appeared less specific to a role’s character and more integral to the collective. The group seemed unfazed by this and rather comfortable allowing their identity positions to expand and contract with natural flui-dity. They know consistency is an unsustainable notion. Its outdated parameters no longer apply within Angst. Imhof’s practice as a whole does not adhere to the deep-shallow dichotomy. Maybe a phone is just a phone, but what does it become in our hands? Instead of worrying that technological devices flatten our emotional landscape until they match the surface of their sleek screens, Angst proposes that they become extensions of our bodies, ourselves. A certain amount of suspicion is commendable in regard to technological advances that work for us just like they work to surveil us. But remaining open to the possibilities they offer is crucial to the advancement of us as a people.

People tend to be offended whenever technology appears in contemporary art. “Young people on their phones” is often read as a signifier of vanity and vapidness. But you used technology in two more -nuanced ways: the tenderness of communication and the threatening presence of drones.

I wanted the drones to fly in a swarm. They were programmed so that they lost control over time. Battery lives became important. The phones are just these things everybody now has to connect with other people. That scares people too, because these devices can bring people together in a group in an instant. Everybody has this kind of agency to react very quickly in a moment. Including me. Of course I could say the work is mine, but what does that mean? It’s not the work of one person. Which is great for me.

It has something very narcissistic, but on the other hand it allows you to dissolve into something bigger than yourself. By “showing” something, you say that it is relevant, but there is also the discomfort of knowing you’re being seen. It showed in the way people performed Angst. Of course, the people participating have a history of alienation growing up. There’s a lot of potential anger.

I was wondering how angst and anger relate.

I think a lot of anger is fueled by fear. The overall political landscape in the Western world is a manifestation of this. All tendencies to the Right, its anger and aggression, are fueled by fear.

Angst is a different kind of anger. And I wouldn’t say Angst is a reaction to that per se, but I think everyone’s personal experience with recent times has influenced the piece.

There is a lot of action, and a lot of non-action. But you can’t ever catch everything. At some point, I walked to the back of the space for a moment and when I came back to the front, all of a sudden there was this massive black streak of graffiti on the wall.

That moment that Josh and Eliza created was pretty brilliant. Udo Kittelmann, the director of the Nationalgalerie, was joking, “People say this is vandalism.” And the next time he came in, there was this horizontal black streak through his whole museum.

The performance used the space very liberally, its participants really made it their own.

The impulse was: “Okay, this is ours now. Let’s show them it’s ours.” Sometimes treating things really well just doesn’t lead to anything.

In an interview, you once said of your collaborative work: “Here I willingly relinquish control.” Which I found interesting because of the implication that –

There was control before? [Laughs] You always think you have control over things, right?

It’s a huge fixation and an underlying force in a lot of our interactions. Isolating yourself often seems like the easiest way to hold on to all your power.
In the art world, and of course beyond, people like to just have one thing to deal with or one name. But in Angst, as an example, you shouldn’t underestimate the people you see. They don’t underestimate you either.

Do you see performance as an extension of your practice as a painter?

Yes. It has a lot to do with surface and appearance. In this piece, and in my recent paintings, there was a certain hailing of surfaces as such. Like, for example, skin. The whole part about shaving the navel was a way to try and get rid of origins.

No, just getting rid of them.