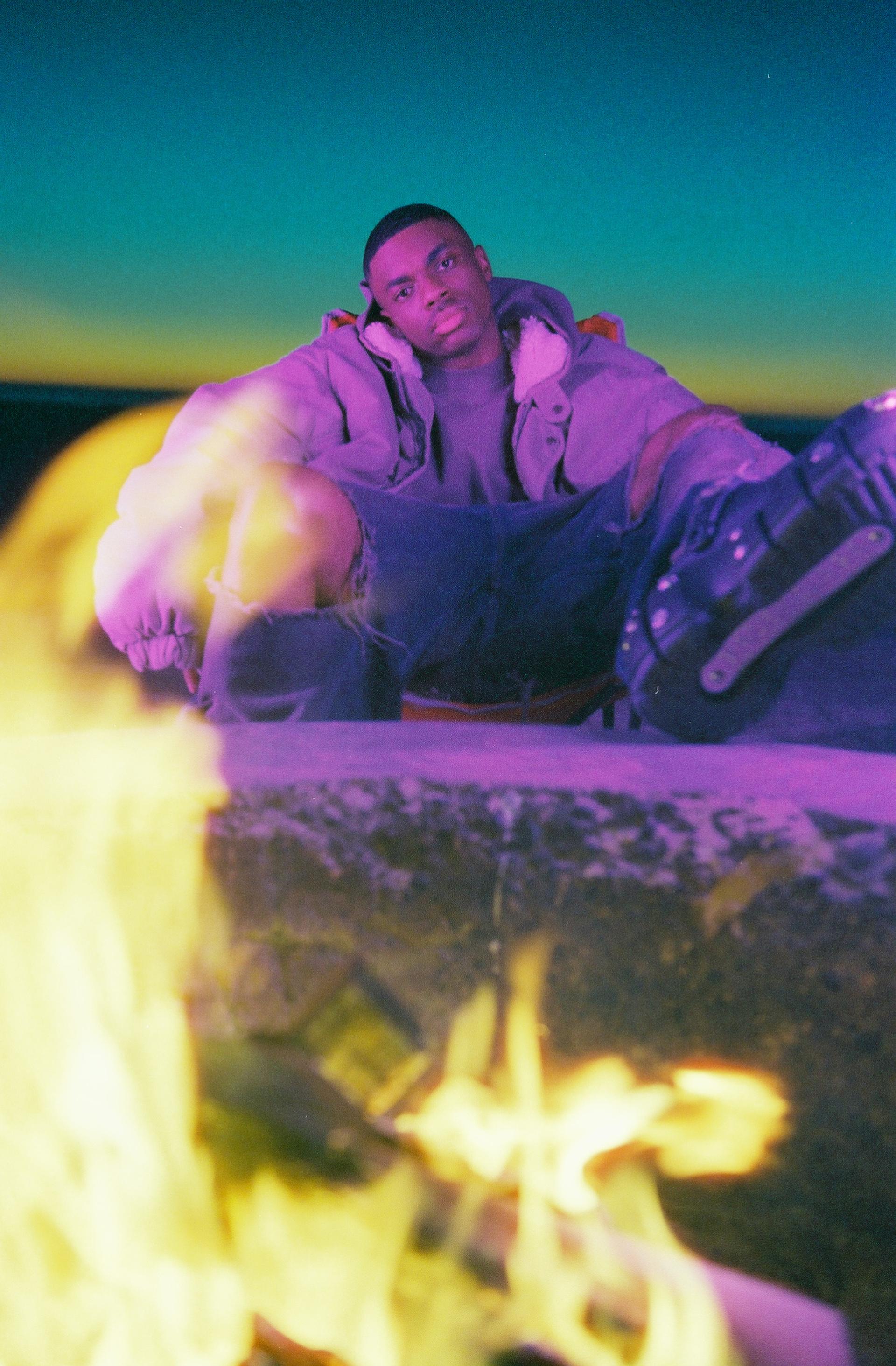 If Vince Staples wasn’t an artist, he’d be a boxer. He weaves his way through conversations with gentle jabs at the industry and its obligations, then lands haymakers about trusting his intuition. This may sound violent to some Karens, but he’s a gentle sparring partner who opens up about the cheat codes of his songs, the random places his Instagram algorithm sends him, and what it’s like being seen as a troll. You don't think Vince Staples is nice? Then you'd better ask his mom. And check out his nice fits in this shoot by photographer Sandy Kim and styled by Corey Stokes.

SHANE ANDERSON: Your texts are very rooted in Long Beach, but all your albums have explored various musical worlds. Are these contrasts:
A) A reflection of different aspects of yourself,
B) Documents of maturation,
C) An attempt to continually innovate, or,
D) All of the above?

VINCE STAPLES: All of the above. Music for me is about embracing life and the uncertainty and fluidity of what growth could be.

I think a lot of that comes from the production, to be honest. The production of Big Fish Theory made people say it was forward-thinking, but the production on Vince Staples was called nostalgic or reminiscent. This is due to the soulful nature of the album’s samples and tempos and tone of voice. But then again, it might be because if we don’t know something, we think it must be from the past.

As for the texts, I’ve always talked about the same things and utilized the same stories.

Do these past experiences haunt you?

No. I’m grateful and appreciative for everything I’ve been through, all of these learning experiences. Everything happens for a reason, so I don’t have any regrets.

That sounds much more optimistic than I expected.

I get that a lot. People don’t really expect someone who looks like me and has the same track record as me to be optimistic. The world thinks we’re hopeless, grim people. But that’s the opposite of reality. Where I’m from, people are so optimistic, creative, religious, and strong. A lot of this is rooted in the Black experience and how our people deal with everyday life and express themselves. If you look at blues, jazz, hip hop, rock and roll, you’ll find optimism everywhere. Optimism is how we survive and overcome and grow.

Let's turn to the upcoming album. Did Ramona Park break your heart?

You could look at the title as being more metaphorical or you could say life does that to us. We have downs. We have heartbreaks. We have loss and happiness and all of these shifts. But to be honest, I just like how Ramona Park Broke My Heart sounds.

I guess what interested me about the title was the notion of home.

In one sense, you’re right. That was a thought and a thing and an emotion. The connectivity to home while escaping an environment through success. Is it survivor’s remorse, you know? But, then, at the same time, I don’t think about anything when I make it. I don’t sit around and brainstorm. It’s hard to explain but I’ve never not had a full idea. Every idea I’ve ever had is pretty done from start to finish when it comes to me. It’s just a matter of having the patience to hear what’s already there.

It’s funny because I look at G-Funk as being about synth bass and funk samples. We didn’t have any of that on Vince Staples. The reference came up because people didn’t understand what they were hearing. I didn’t grow up in that era. When I was a kid, Snoop Dogg was already doing No Limit Top Dogg, which is way beyond G-Funk. Still, I appreciate being viewed as being similar to something as captivating as that time period.

Do you believe in magic?

My stance on everything is: why not? I kind of believe in everything. But yeah, the definition of magic at the end of the new song is something I agree with. People go through so much. And being able to overcome those things is magic. Overcoming poverty or health problems is something that seems impossible. But people do it. People do unbelievable things every single day. And music and all other forms of creation are just ways for us to relate to one another even if our specific circumstances aren’t the same. Human experience is very limited to a certain extent. We can go through a lot of things – like love and hate – but the range of emotions aren’t that different for all of us. There’s only so much to life. We grow, we learn, and we eventually die. And so, when you listen to music or watch a film, you might not understand the specific script, but I think you can understand the intention. The intention is what makes it make sense.

Again, your positive outlook surprises me. Your lyrics can be so dark.

If I was a nihilist and thought that everything was meaningless, I wouldn’t make anything. To me, I’m just blunt and matter of fact.

Is that why you sometimes troll online?

I don’t really like the internet, to be honest. I don’t want to read comments or anything like that. I know the internet gives a lot of people opportunity and connects people, but I don’t know, man. I’ve worked really hard to be free of certain things. Growing up, I didn’t have the best living situation. My mom didn’t have a car for a minute and that’s very difficult in California. So now I’d rather go for a drive than be on the internet.

“If I was a nihilist and thought that everything was meaningless, I wouldn’t make anything. To me, I’m just blunt and matter of fact.”

Have you driven anywhere nice lately?

I go to a lot of places just to see what they look like. My Instagram algorithm is very random, and so I might drive six hours just to see what a place looks like and then go back home. That space for clear thought is important to me. The space and clarity to see things I haven’t seen before. I grew up in a bubble. So, I appreciate being able to escape that bubble.

Have you left the bubble? I mean, you’re still living in Long Beach.

That’s not that big of a deal.

To me it is. I moved halfway across the world to escape difficult circumstances.

Well, I’m Black, so it’s difficult and dangerous everywhere. You can move anywhere you want, but like Dr. Dre got pulled over at gunpoint in Malibu. Besides, I still love Long Beach. I would never live in Hollywood. I’m not looking to escape. For me, leaving the bubble is more of a mental thing. I mean, it’s more important to stay inquisitive and willing to learn.

“I’m Black, so it’s difficult and dangerous everywhere. You can move anywhere you want, but like Dr. Dre got pulled over at gunpoint in Malibu.”

Like by making the comic book Limbo Beach, for instance. This was something new for you, right?

Yeah but I approach everything with the same kind of irrational confidence. Whether it be a comic book or a Netflix series, I just think “why not? Why not try that?” It’s important to not take this shit so serious. That’s what allows me to approach things so confidently.

Are you comfortable in your own skin?

How important is authenticity to you?

It’s not that important. I just had the luxury of being raised by people in an environment where that was the norm. We all just wanted to be ourselves and for everyone else to be too. So, this isn’t something I really think about. It’s just the person I am.

And who is Vince Staples?

You’d have to ask around.

If I did, I’d get very different opinions. Some articles describe you as “disarming,” others as “grounded.”

You can’t listen to none of those people. You’d have to ask my family and friends.

And if I asked them?

My mom would probably say nice things. But my mom’s a nice lady.

In Outer Space with Will Alexander

“I Don’t Want Anything”: An Interview with Ecco2k

Radicalizing the Youth of America with TRAVIS SCOTT

THE PLAYBOI MANSION: A House That Makes Rap Music