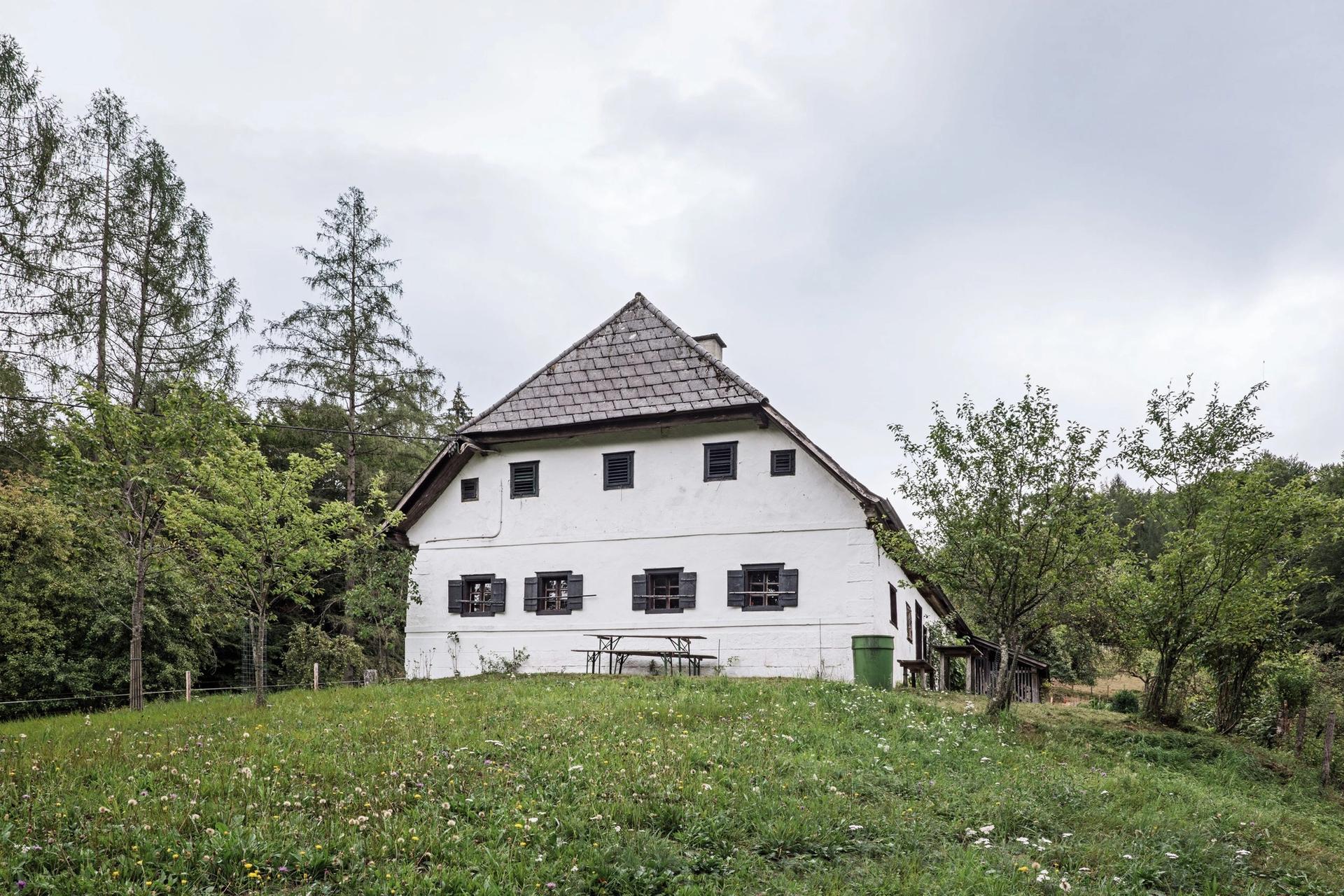 “I’m not a country person at all, fundamentally. Nature doesn’t interest me whatsoever, neither the plants nor the birds, because I can’t tell them apart and still don’t know what a blackbird looks like. But I do know that I cannot live in the city in the long run, with my bronchitis. I don’t leave the farm at all anymore, even in winter, because I half kill myself when I’m in town.”
In 032c Issue #36, we explored the interior life of Austrian author Thomas Bernhard (1931–89) – through the interiors of his homes, and the objects that populated them. Below, an excerpt from the monograph devoted to the topic, Thomas Bernhard: Hab und Gut (Vienna: Brandstätter Verlag, 2019), translated from André Heller’s introduction, and an original essay by London writer Charlie Fox, attempting to process – or inhabit – the order and madness of Bernhard’s material world.

When did Austerity become so much fun? Who could have predicted that a tubercular, acerbic mansplainer whose never-ending sentences seemed exclusively suited to the rollercoaster grammar of his native tongue would become the most influential German-language author of the post-war period? Like an irate blogger tapping out a venomous account of the world’s shortcomings, Thomas Bernhard’s self-hating nihilists speak with an enviable freedom: little concern for their listeners, and even less concern for themselves.

In Gargoyles (1967), the insomniac aristocrat Prince Saurau chews through the final 100 pages of the book, his monologue displacing the characters and scenes that came before him, lamenting the slow corruption of the Austrian countryside. In Woodcutters (1984), a dinner guest is poised with a glass of fizz, seated at the low end of the table in a wing-backed chair, sounding off on the hypocrisy, stupidity, and ignorance of the Viennese cultural elite. “The forest, the virgin forest, the life of a woodcutter,” he smirks. “That has always been my ideal.”

In his early life, Thomas Bernhard worked as a grocery clerk, an actor, and a crime reporter – professions he hated, perhaps because he saw the cynical, nepotistic, and arrogant succeeding all around him. As a writer he made a monument of his ability to criticize, eviscerating the farce, triviality, and pomposity he saw everywhere in society, in the Catholic state, in bourgeois culture. Somehow Bernhard’s brand of truth-telling feels more shocking today than it ever has, 30 years after the writer’s death, when everyone sees everything but nobody pays attention.

A teutonic Samuel Beckett for whom failure, death, and suicide were a source of animation, Bernhard’s successes were undeniable. He received numerous prizes, always in performative call and response with the various committees that bequeathed them. Upon accepting the Austrian National Award in 1968, he condescended to deliver a speech that began: “Esteemed Mr. Minister, esteemed assembly, there is nothing to praise, nothing to condemn, nothing to accuse, but a great many things are ludicrous; and everything is ludicrous when one thinks about death.” The dignitaries in the theater led out, but self-immolation is a Viennese tradition, an engine room for rhetorical showmanship established by Bernhard’s forebears Stefan Zweig and Karl Kraus. State money was always useful, practically, and Bernhard knew exactly what to do with his Austrian cash prize: “It had always been my wish to have a house to myself, and even if not a proper house, at least walls around me in which I can do what I want, permit what I want, lock myself in if I want.”

Shortly before his death – reportedly, by assisted suicide – Bernhard plotted his final emigration, insisting that his works never be republished or performed within Austria. They were, eventually, but he slipped across the border all the same. Bernhard’s furious, propulsive, and ultimately profound style lingers in the bad breath of the dons of the literary Anglosphere. He may have despised his austere, rocky Austrian landscape, but he cherished the buildings he renovated at Ohlsdorf-Obernathal 2, revisited in Thomas Bernhard: Hab & Gut, a 2019 interiors monograph from Brandstätter Verlag edited by André Heller and laden with images of the author’s obsessively presented spaces and furnishings – vignettes of bespoke austerity.

There he lived the life of a solitary woodcutter among his pedantically selected objects, like his demented aristocrat Prince Saurau, who had his own prescription for filling and existing in empty rooms: “The person who dwelt in them had to fill them solely with his own fantasies, with fantastic objects, in order not to go out of his mind.” What follows is a look at the undisturbed rooms that Bernhard left behind, with a preface by Heller, and an intervention from the abovementioned Anglosphere by London essayist and curator Charlie Fox, author of the encyclopedia of horror and camp This Young Monster (2017).

THOMAS BERNHARD was the most massive disruption to Austria’s literary energy field in the second half of the 20th century, subject of inexhaustible fascination.

He belonged to no club, to no group, to no circle, to no persuasion, to no party, to no artistic organization whatsoever. He always belonged, to the utmost degree, to himself alone, and could thus operate with a ruthless selfishness, taking no prisoners. With his linguistic machete he cleared a path to lasting validation for his brachial truths, brilliant blasphemies, grotesque exaltations, touching attempts at love, and other eruptions of imagination. Bernhard was also a sardonic trickster, a master of the underhanded blow, a virtuoso of high-performance agitation. All in all: a solitary man of a kind one encounters only once in these unholy times.

I’ve been interested, my whole adult life, in the dwellings and houses of exceptional characters – always valuable supplements to the understanding of the individual and the oeuvre. The apparently incidental, even the anecdotal often belong to the most revelatory. (I remember for instance how deeply impressed I was 30 years ago to learn that Hugo von Hofmannsthal, in 1912, had spontaneously purchased the now legendary 1901 Picasso self-portrait Io out of the display window at Munich’s Galerie Thannhauser, and placed it in his study at Rodaun Castle, a source of inspiration and solace. This unexpected fact fundamentally changed my view of the writer behind the Chandos Letter.)

When the Fabjans – Bernhard’s half-brother and the sole and responsible heir to the Thomas Bernhard estate, and his equally passionately involved French wife Anny – so kindly made the author’s home in Ohlsdorf accessible to me, I encountered a down-to-the-smallest-detail, meticulously staged private cosmos full of illusions, red herrings, and false assertions of supreme elegance. Over all, a beguiling as if.

As if Bernhard had been landed gentry.
As if many guests had spent the night there.
As if he had cooked in the modern kitchen and eaten in the dining room.
As if he had been a huntsman, a bespoke shoe fetishist, an equestrian.

Much of this refers, for those with profound knowledge of Bernhard, to descriptions in his plays and prose. Perhaps these descriptions have been recreated, after the fact, in reality.

I mean, in the end, what am I supposed to tell you? “I’m a big fan”? Ha ha ha. Nope, I can’t do it. I always thought a great title for Bernhard’s collected works would be the same thing that Kurt Cobain choose for his last album before everyone else told him it wasn’t funny but scary: I Hate Myself and Want to Die.

A Fireside Chat with Krampus, the Alpine Christmas Demon