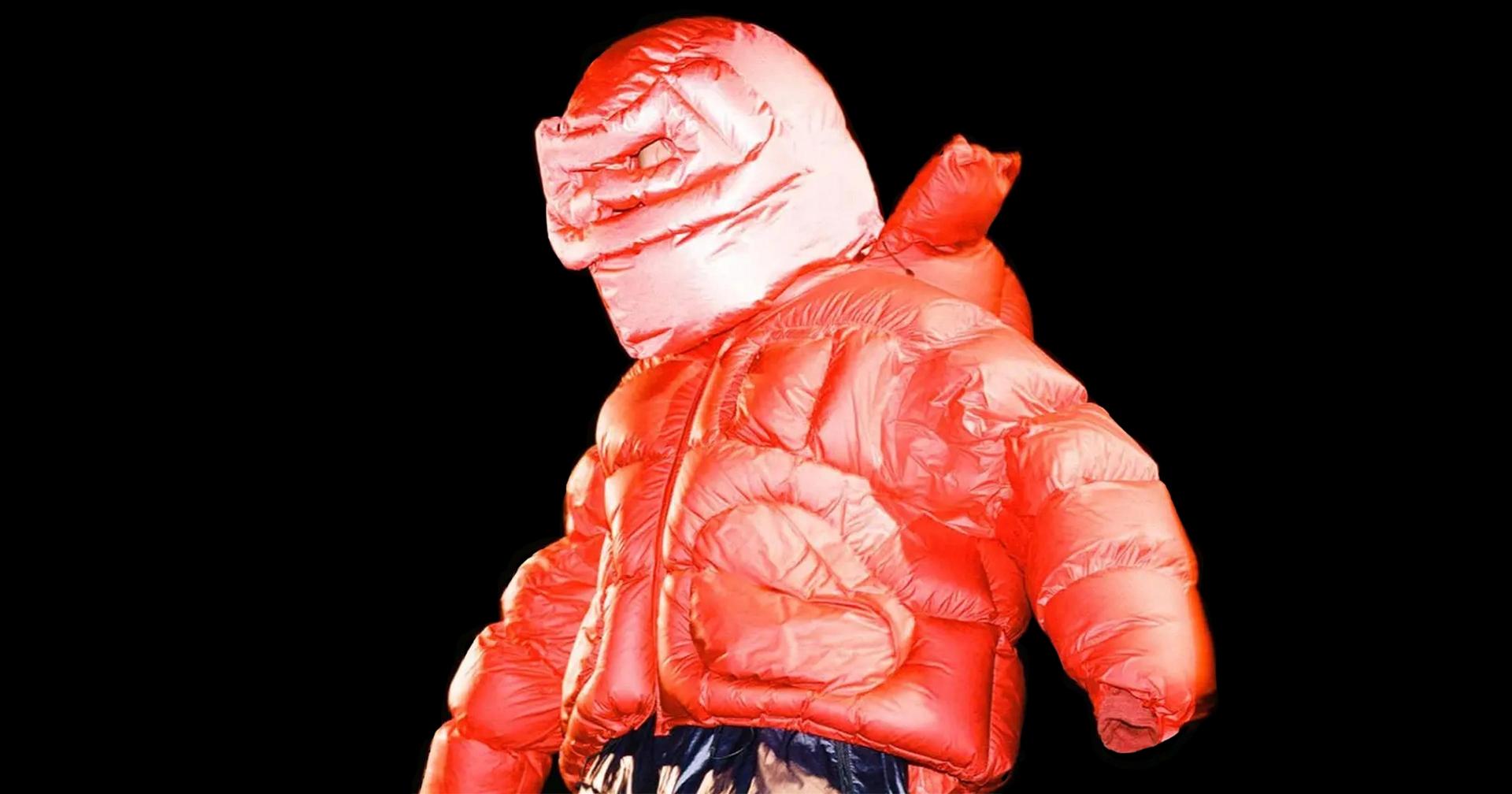 When DINGYUN ZHANG was in his second year of school at Central Saint Martins, he was flown to YEEZY’s headquarters in Calabasas and offered a position on the spot. Given that the Beijing-raised designer’s interest in fashion began in the margins of his schoolbooks, sketching the basketball shoes his parents wouldn’t let him purchase, it’s only fitting that he made his mark at YEEZY in the footwear department. Zhang was the mind behind the popular 700 Wave Runners, among other notable sports and military models.
Since graduating from CSM in 2020, his presence as a designer has inflated online, where he posts images of his otherworldly winter wear. Its hyperbolic, cartoonish silhouettes are inspired by the colors and contours of underwater life, and have made significant ripples in the fashion industry with their eye-catching ability and playful take on performancewear. Zhang has yet to officially launch his label – or website, for that matter – but he has already been dubbed a Moncler “Genius.” His squid-like face helmets and reef-reminiscent puffer jackets have been seen on K-Pop “Alpha” and 032c Issue #39 cover star CL, Gigi Hadid, and Kaia Gerber, among others.
Covid-19 regulations have complicated Zhang’s plans to move to the YEEZY campus in Wyoming full time, but he and Ye are reunited again in spirit in 032c Issue #40, albeit in separate features. To celebrate Zhang’s work in the winter issue, we wrapped our favorite German rapper, Ufo361, in zany Zhang puff and sent him soaring through the air. To accompany the shoot by Michael Anthony, we asked writer Charlie Fox – expert on all things monstrous and alien – to draw up an unofficial PRODUCT REPORT.
Scroll to read Fox’s free-associative assessment below.

CHARLIE FOX: WHAT ARE THE IDEAL WEATHER CONDITIONS IN WHICH THE GARMENTS CAN BE WORN?

Cloud drone: similar to above but with the same cumulonimbus clouds emitting a ferocious electrical drone, best mimicked by the album Special Low Frequency Version by Earth at maximum volume.

That phase of winter when the sun stops giving a fuck due to pollution/radiation and is as weak as the crack of light under a door in a dark corridor.

WHO DRESSED THE PATIENTS IN THE GARMENTS?

TYPICAL MOOD OF THE PATIENTS WHILE DRESSED

HOW SOFT ARE THE GARMENTS?

Soft as the magical velvety substance which covers deer antlers shortly before they ripen and flourish into the classical stag headdress.

Soft as the fur on a stoned teenage faun’s jelly legs.

OPTIONAL MASKS TO BE WORN WITH THE GARMENTS

A Darth Maul mask originally worn by a manic raver named Steve with a penchant for “naughty biscuits” (1999) – the most popular mask.

Face-canceling fetish mask which could also be repurposed for a fencing match (2024).

LIST OF SCENTS WHICH COULD BE WORN WITH THE GARMENTS

Sylph (reportedly harvested from flora and fauna found within the Garden of Eden).

Stripped and therefore bewildered, one of the patients decided the only adequate replacement was covering their body in luxurious raspberry yogurt and then stroking the body extremely gently as an angel might caress a tired cat.

Smoking alone at night with a head wound and/or after discovering you’re stricken with an infection which causes noxious bacteria to seethe at the edges of your mouth.

Purgatorial scanning of the internet at 4am because who knows why and there’s no difference between your congealed brain, at that point, and the smashed-up laptop screen staring back at you.

Dealing with the malignant fact that you are unfortunately yourself.

WHAT DID YOU SEE WHILE WEARING THE GARMENTS?

“Like, a strobe light coming out the end of my penis?”

“My confused reflection gone all drooly in the bodywork of a flaming car.”

“Ooh, me and my friend watched this vid of a leopard sneaking through water in the jungle or whatever. You’ve gotta watch it, look, the water moves like silk. It looks time-lapse. I know, it’s low-res but –”

“Guy being removed from his house, obviously dead. I think it was a drug thing? And the ambulance and the police car were just there with their sirens on mute, twirling. He was in one of those black sarcophagus bags. Body bags, y’know? And I was wondering who’s gonna feed his dog if he has a dog. Things are bad enough with the chemicals anyway–”

WHAT COULD A CHILD DO WITH THE GARMENTS?

Cover them with a protective layer of magical drool.

Sleep inside them like a chrome igloo while dressed as rabbit, woozily sucking thumb.

Wear them and pretend to be a science-fiction version of a witch.

WHAT DO THE GARMENTS LOOK LIKE IF THEY’RE DISFIGURED?

WHAT DOES IT FEEL LIKE TO WEAR THE GARMENTS?

“Like I got my medication wrong and my brain is a shiny void.”

“A hug from a non-human creature.”

(COULD NON-HUMAN CREATURES WEAR THE GARMENTS?)

Mutants, yup, of course, they would be the ideal users. Check with the mutant community. And witches, obviously, if you pay them in dead cats.

BEST DRUG TO TAKE WHILE WEARING THE GARMENTS

COULD AN OBJECT BE DRESSED IN THE GARMENTS?

A couch, which would look like a weird biomorphic sculpture, emitting a transcendent Andrei Rublev light.

A door, which would become a fucked-up mirror.

(WHY ARE THERE MEAT SCARECROWS?)

Because humans have got a lot of things wrong. Still, could be a potential ad campaign around Halloween or when the Hell Phase of Triple Winter begins.

WHAT SPORTS CAN BE PLAYED WHILE WEARING THE GARMENTS?

Hide and Seek But With Weaponry.

HAVE THE GARMENTS BEEN DEPICTED IN ANY ARTWORK?

Yes, a transcendent anime film in which two beautiful ghosts get married.

IDEAL DIET WHILE WEARING THE GARMENTS

Cookie dough ice cream was requested during the first phase of experimental dressing. Of course, only feeding by tube can be allowed now but the patients were soothed out of tantrum phase with extra medication, lullabies, and stroking.

HOW SHINY ARE THE GARMENTS?

A brain-dazzling and near-lethal intensity of shine, like when sunshine bounces off new snow.

SEXUAL STUFF WHICH HAPPENED WHILE WEARING THE GARMENTS

Hazmat scientist role-play where both parties feverishly whisper the phrase “I need the fluids” to each other.

That thing where you nod off while you’re grinding on each other because it’s late and then you hallucinate that you’re fucking a tiger.

(A lot of the patients noted that the garments created a dreamy nest for them to cuddle inside: the perfect lovers, as in the sculpture Psyche Revived by Cupid’s Kiss by Canova.)

WHAT HAPPENED WITHIN THE NEST?

DID ANY NEW KINKS DEVELOP FROM WEARING THE GARMENTS?

Yes, a fantasy of being an alien and making love to another alien.

MOST COMMON DREAM REPORTED WHILE WEARING THE GARMENTS

NOISES EMITTED BY THE GARMENT

If palpated correctly, ecstatic levels of ASMR, supposedly akin to having “angels sneak across your flesh in little ballet pumps.”

Doja Cat expresses syrup from her left breast for Pegasus to lick up while wearing the garments while skywards two aurora borealis–like CGI renderings of the rapper and the mythic horse have sex. All this on a polar ice cap drifting like a sleepwalker through dark water.

A new breed of ghost.

SECOND MOST COMMON DREAM REPORTED WHILE WEARING THE GARMENTS

Being eaten by the bed in slo-mo.

ANY NEGATIVE SIDE-EFFECTS REPORTED FROM WEARING THE GARMENTS?

A constellation of lurid bruises on right arm, also known as “the addict’s swirl” or “Exile on Vein Street.”

One boy-patient sleeps in a kennel after wearing the garments, a bowlful of milk and a bowlful of tranquilizers near him at all times, but this is probably just a cute phase before adolescence (a.k.a. the Deformed Phase) kicks in.

WHAT’S THE IDEAL LANDSCAPE IN WHICH TO WEAR THE GARMENTS?

A snowscape (the sky lit by toxic green fumes) where you can be alone, at peace.

THIRD MOST POPULAR DREAM REPORTED WHILE WEARING THE GARMENTS

A Fireside Chat with Krampus, the Alpine Christmas Demon

5 months ago
No results for ""