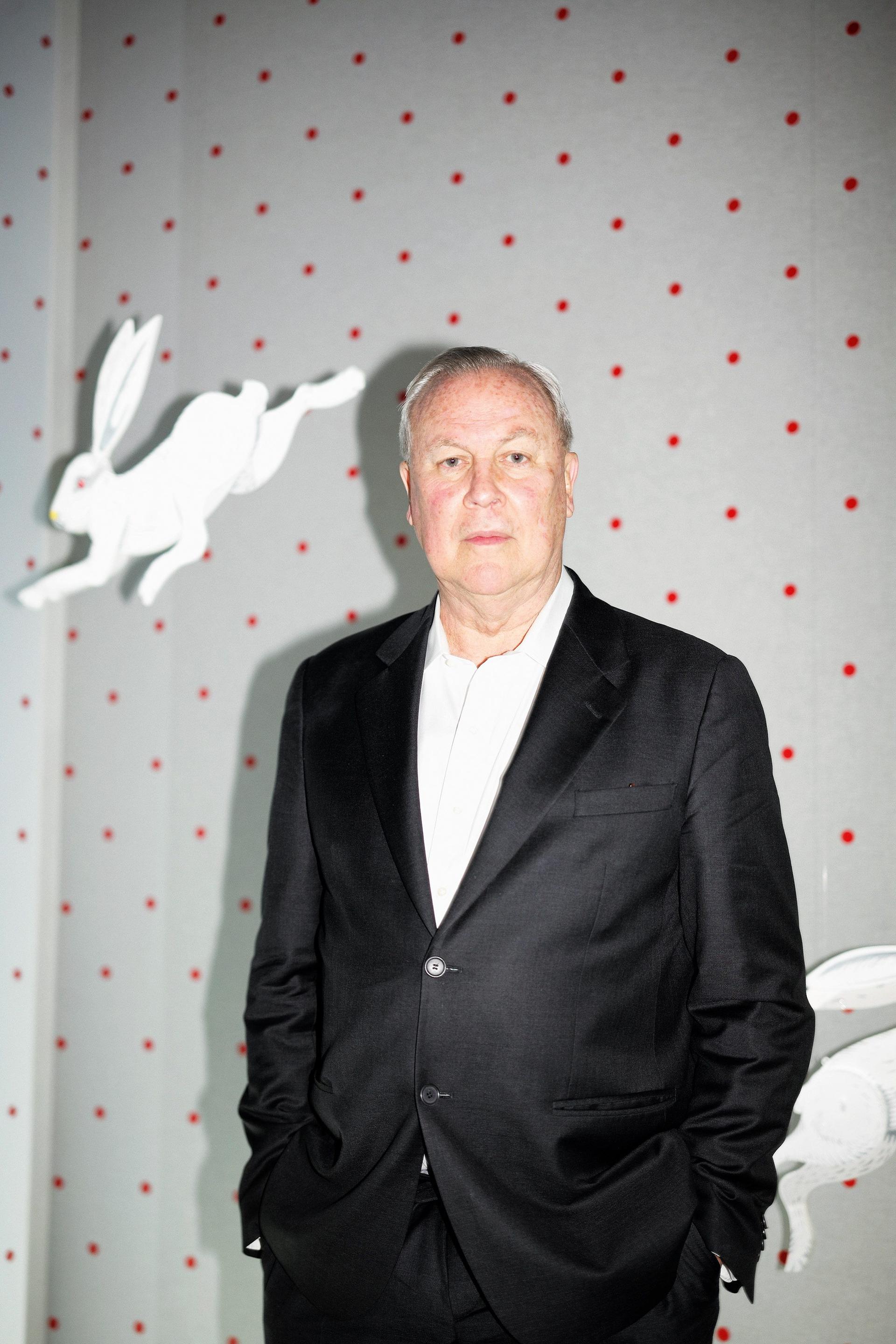 The Terrifying Humor of ROBERT WILSON

American director Robert Wilson has transformed modern theater and opera. His avant-garde pieces, like Einstein on the Beach, disrupted the rules of time and space on stage. Edging on 80, “Bob” – as Wilson prefers to be called – is more active than ever: He directs, produces, and collaborates with theaters, brands, and artists across the globe. Robert Grunenberg met with the Texan in Venice to discuss his legacy, his friendship with German dramatist Heiner Müller, and why losing control in an ever-regulated world just feels good.

Mr. Wilson, what is the most radical thing you have done in your career?

In 1973, I did a play that was seven days long. I performed for three and a half days straight – night and day. Then I woke up in the hospital and didn’t know where I was or what had happened. That was in Shiraz in Iran. There was no one in the room. I had a green hospital gown on. I pulled all the tubes that were attached to me out of my arm. Then I went to the closet, but I couldn’t find any of my clothes except for my cowboy boots. So, I put them on and left the hospital wearing the green gown. I walked back to the theater and continued to perform my play.

Do you still wear cowboy boots?

On special occasions. I guess, it has to do with me being a Texan. I grew up in Waco, Texas, and there was almost no cultural life. No museums or galleries, and almost no theater. In my early teens, I met The Hoffmanettes – Faye and Bird. They taught ballet and tap dance to young dancers. As a child, I spoke with a stutter. Soon after I met Bird Hoffman, she suggested I slow down my speech as a way of correcting the stuttering and she spoke the words very, very slowly. She said I should go home and think about it, and I did. Within about six weeks I had more or less overcome the stuttering. It was almost as if I was speeding in place. She had an innate understanding of the body and its healing powers. I once remember that she took a tutu from a young dancer and took a match to it, burning part of the dress. I think it was the first time in my life I had met a real artist. I thought a lot about her during my time at the University of Texas and I wanted to go back and say thank you. I returned to Waco with 100 long stem roses for her. She and her sister Faye lived in a Victorian house with a front porch and a screen door that opened immediately into the dance studio. She must have been about 70 years of age. I saw her through the screen door standing on her head. I took the red roses and spread them all over the front porch and left. Years later I named my foundation after her.

You have a special relationship with Berlin and the German Opera world. You came to Berlin in 1977 for the first time. What was that like?

I had been asked to create a new work for the Schaubühne in Berlin with the director Peter Stein. The way I often write at work is, I go into a room with a blank book and I look at the actors, we improvise until I form a script. So this was a shock for the actors of Peter Stein because they approached working on a new piece in a completely different way. The German actors would go to their desks first to research and spent weeks reading books, discussing and talking with the dramatist, and figuring out an interpretation of a text. So, then here was Bugs Bunny from Texas, who came with a blank book, no ideas in his head, wanting to start the staging the first day. I asked the actors to do something. I said “Get up.” They asked me, “What do we do?” I said, “Anything.” It was a totally new experience for them. It was very difficult for them to do something without knowing why they were doing it.

Do you think that is a specific German attitude?

It is very German. You start with the cause, then you make an effect. I am a superficial American and I start with an effect. I don’t have to know the reason why I do something and I don’t want to know the reason why I am doing it. If I know why I am doing it, I am blocked. Starting with the effect is freeing for me. And if you want, you can also find a cause in that. The Germans do things “because” of something. It goes back to antique Greek philosophy. I come from a more Eastern philosophy. You don’t give an interpretation, you stay open to situations. Remember what the caterpillar said to Alice in Wonderland? “Everything you can think of is true.”

When you first came to Berlin you met the dramatist Heiner Müller, who lived in East Germany, and you became close friends. What was your friendship like?

Heiner always said, the difference between Bob and me is very simple: Bob likes Vodka and I like Scotch. It became a ritual, every time we met, I would order a vodka and he would order a scotch. We were an odd couple. No one could believe, that the two of us were close friends, but there were some things we deeply agreed upon in our work. A kind of formality – a distance from material and the way we dealt with emotions in text. It was amazing how he could abstractly think about theme and variation as a way of constructing a play. A lot of people in theater can’t think that way. What was really great about Heiner was that I never had anyone around me who was a confirmation of what I was doing. He also believed that interpretation is not for the actors, the director, the writer, the designer – it is for a public, for philosophers, for people in time. It’s not judgment of what you are doing, it is to give space for it. With Heiner, I felt freedom, because we both opened up the text and refused to give an interpretation. Great works of art are full of meaning, but they don’t have just one meaning, or one last truth.

When Heiner died in 1995, you became a director and producer of his plays, among them Müllers Hamletmachine, that can be read as a commentary on the intellectual world of the former GDR.

Before Heiner died, he told me, “You are the best one to direct my plays.” I asked him, “Why do you say that?” And he said, “Because you provide a space for intellectualism and most importantly, you bring humor to my plays.” He said that the Germans are too close to the text. He said that I was an alien, much further away from the content. He said, “You bring humor to it and that is what makes the work really terrifying.”

With your work Einstein On the Beach, you pushed the borders of time and space in modern opera and theater. There isn’t a plot you can follow like in a play that you would see on Broadway. Why did you feel the need to rethink the standard procedure?

I never wanted to tell anyone what to think nor did I want to say what the meaning is of what I do. I am interested in the construction of time in space on stage apart from the narratives. Often, when I go to the conventional theater, I feel like I’m in High School where someone is trying to tell me something. Broadway theater is like TV, where you’re exposed to a programmed plot, narrative, or meaning. Once you eliminate that you get lost and associate freely. That, for me, is freedom. Of course, you have your own ideas, your own feelings and emotions, but you don’t impose them on other people and the public. We should take more time to find our own modes of perception, make up our own minds. We, as people, are reluctant to leave the beaten path. People are scared to lose control.

What have you experienced when you’ve lost control?

Get lost. Face yourself, encounter yourself. It’s funny – when I look back, I realize that I have never tried to control my lifetime. I never planned to work with theater and opera. To be honest, for a long time I didn’t know what to do with my life. Everything started when I worked with a deaf person on a seven hour piece, with no text and no sound. I just went with the flow and followed the things that came my way.

The choreographer Lucinda Childs with whom you worked on Einstein on the Beach said that postmodern theater avoids the direct play of emotion. There is no playacting like in Giselle or Swan Lake. Emotions are shown by leaving something out. For instance, there are voids in the language, text, music, or movement. It is a whole different idea of narration.

I always thought that my work is classical. It’s formal, cool, and cold, if you want. The text can be hot – the emotions can lay in the text. But the faces of the actors are cool. I use the stage picture as kind of a mask. You see an image and then you hear a text. The text does not relate to the image. So, it’s kind of like a mask on the face. The way it was in the Greek dramas and in Japanese classical theater where the emotions are inside and not outwardly portrayed. Like Buster Keaton or Marlene Dietrich in the twentieth Century. Keaton’s face is like a mask. His emotions are deeply felt, yet not expressed. It is a time-space construction. It’s all dance. I change the traditional space just as painters change space on the canvas.

The figures in your plays often wear animal masks and outfits. What kind of meaning do animals have with regards to the emotions in your work?

Animals have played an important role in my work. My theater, which I have developed over the course of 50 years, very much relates to animal behavior. The German poet Heinrich von Kleist said: “A good actor is like a bear. He will never strike first, he will wait for you to move.” I often tell actors, when you are on stage, it is like you are a dog who approaches a bird. The whole body of the dog is listening. Not only with its ears – the way the foot touches the ground, its back, its tails is listening. Everything is highly aware.

You travel the world and set a pace that most people can’t keep up with. What is your perfect idea of peace and relaxation?

A double vodka on the rocks. Actually, I am like a bear. Next to sleeping, I like eating.

A Venetian Rendez-Vous with AXEL VERVOORDT