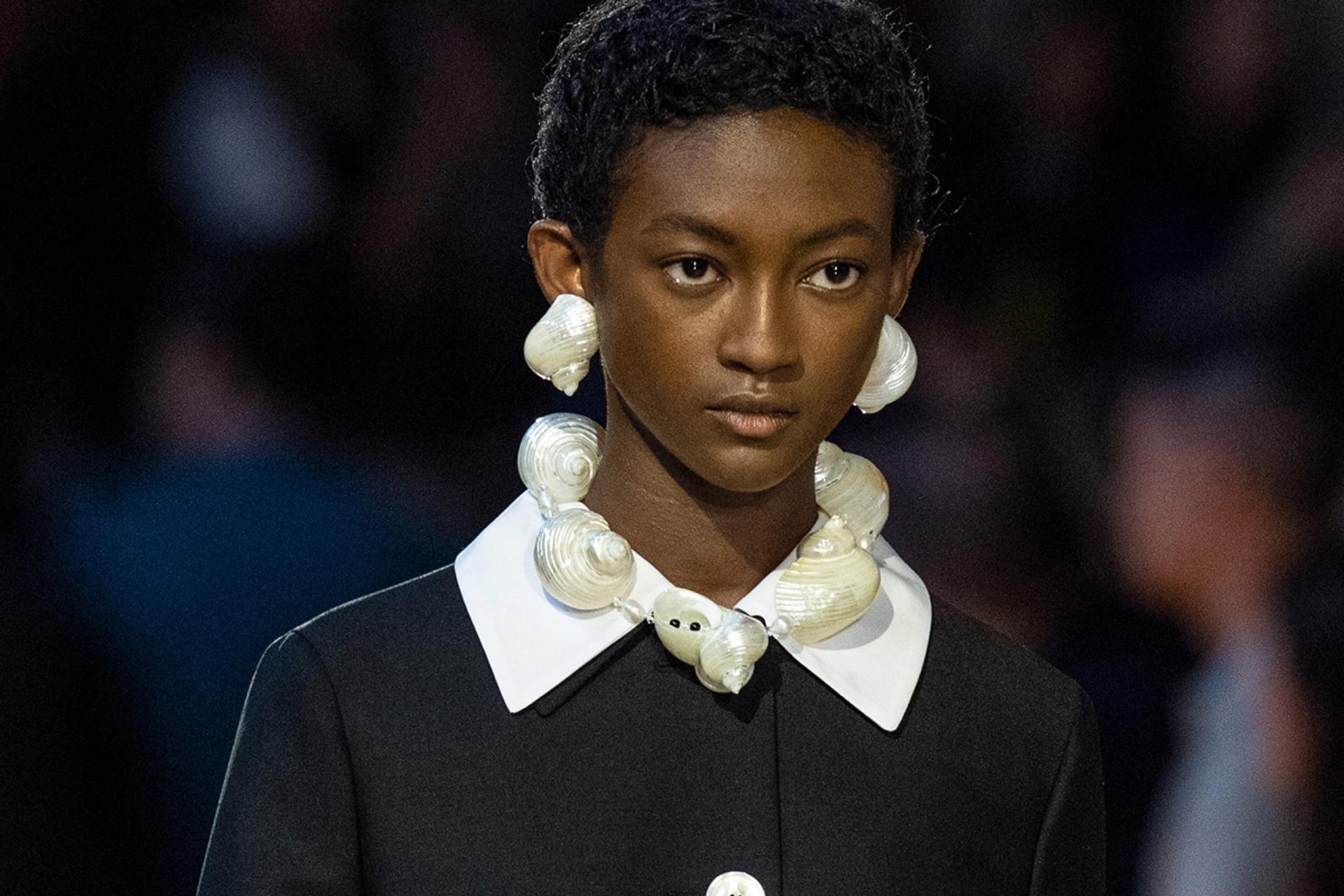 Miuccia Prada called her Spring/Summer 2020 menswear collection “Optimist Rhythm,” an uncharacteristically hopeful message cropping up from a (justifiable?) overabundance of contemporary nihilism – environmental, political, personal. The Spring/Summer 2020 womenswear collection, titled “A Style” and debuted on Wednesday, is optimistic, too, this time about our relationship to material consumption, and the power of individual style over the fashion machine.

“Lightness, simplicity, no eccentricity” is how Prada described the men's collection, presented in June in Shanghai, where the Fondazione Prada has annexed and restored a historic early 20th century mansion to house its activities in China. It was Shanghai’s industrial heritage, however, that provided the context for the latest menswear show, designed by AMO and staged at Silo Hall – a converted grain storehouse and Asia’s largest silo building – in Minsheng Wharf, where models walked a neon blue “glowing enfilade” through the building’s raw chambers.

For this week’s womenswear presentation Prada returned to its command center on Milan’s Via Lorenzini – another adaptive reuse / industrial redevelopment, here of a former distillery. The SS20 women’s collection did, indeed, distill certain elements of the show in Shanghai. Much like its men's counterpart, the clothing suggested a return to the archetypal Prada look, after a couple seasons channeling 1990s club life with equal measures of playfulness and angst. In the words of Miuccia Prada herself, the new collection consists of “timeless clothes you don’t throw away”; according to the press release, it’s about “the power of women over clothing.” More style, fewer clothes, in other words – a message of pragmatism delivered this season in a deep and dusty color palette, 1960s and 1970s geometric prints, and elongated retro silhouettes that seemed to cry out for pearls, but were accessorized with seashells instead. Prada has called on personal allure to squash the need for material overconsumption; if you’re going to complicate your look, add to it from the back of the closet (or better yet, your rich aunt’s wardrobe).

A barometer for Italian fashion’s attitude towards sustainability, Prada knows how to speak of and to the Zeitgeist: this year, the label went fur-free and signed the G7 Fashion Pact initiative led by Kering, aiming to reduce the ecological impact of the fashion sector. This collection, like those of 2019, taps a youthfulness of decades past, yet this time does so somehow more romantically than futuristically – more “play dress up” than “play Joy Division.” Prada’s latest also plugs into the very contemporary politics of ecological commitment: the streetwear-inspired nylon bucket hat reboot from a couple years ago has, for 2020, been upcycled, appearing in Milan as a bohemian patchwork bonnet. (Prada’s iconic nylon accessories are going completely sustainable, too, as the label prepares to produce exclusively in recyclable EcoNyl by 2021.) Still, Prada’s activism was well-behaved on the runway, demurely contained in diaphanous white dresses, buttoned-up blouses, twist-free fabrics, and tailored jackets. A congenial ingenue, somewhat Hitchcockian but also a bit Wes Anderson, whose Fondazione Prada exhibition with Juman Malouf fittingly opened last night – and who is known for a capacity for whimsy in darkness, for conservative optimism in hard times.

BAUHAUS 100: Eulogy for a Perversion