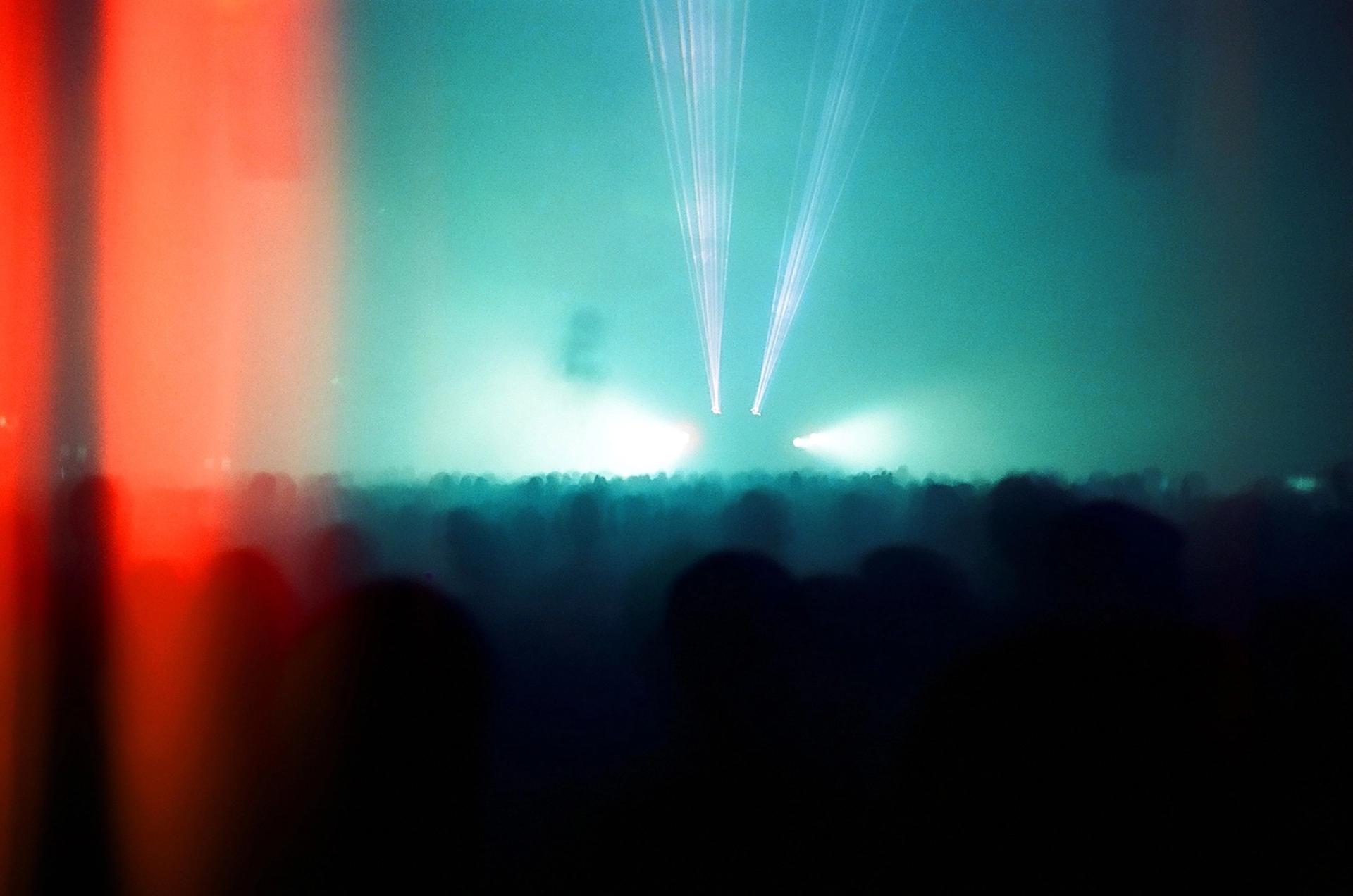 It may seem late, but the world’s first “sky dancers” – the fan-powered, man-shaped inflatables that wiggle in the wind – were brought to life in honor of the 1996 Olympic Games. Conceived by the Trinidadian Carnival artist Peter Minshall, it was Israeli “air-chitect” Doron Gazit who patented and licensed the design for these flamboyant figures also known as “fly guys,” “tube men,” “tall boys,” and, informally, “used car-dealership marketing techniques.” As of September 2021, we can add Cyprien Gaillard’s installation for Berlin Atonal Festival – Visitant– to this long list of epithets.

Amazon Prime members can now buy fly guys for less than 50 euros with the click of a button – next-day shipping! (not including blower) – but these nylon inflatables retain a mythic quality in American highway culture. The road-tripper’s equivalent of a shooting star, sky dancers bear witness at once to dying sandwich franchises and Gun Depo super-sales. Their comedic effect prevails not despite but because of the tragedy of their circumstance; what might look like jubilation in the split-second of a drive-by can register as suffering when one is stalled at a red light. From now until Atonal’s conclusion on October 30, attendees can ponder all the chaos and emotion of a sky dancer’s performance – without a car. The annual happening returns renewed in 2021 – having skipped the fall 2020 edition – with an experience that is “not a festival, not an exhibition, not a tour, not a performance,” but an amorphous fusion of all of the above. Its sexiest offering, however, isn’t its impressive list of commissioned artworks or its concert series, but its invitation to “discover the unexplored areas” of Kraftwerk: the repurposed power plant that serves as Atonal’s home.

Playing into the Berlin club scene’s reputation as an adult playground, visitors are guided through the industrial complex on what Atonal’s press materials call a “ghost train.” Gaillard’s sky dancer is one of many “situ-installations” and “musical apparitions” that unfold during a timed, two-hour sequence – a guided walking tour, no actual boxcars included. After dismounting this imaginary ride, visitors are free to explore the techno funhouse that is Kraftwerk’s main auditorium, where projects “come alive” with sudden light and sound activations. The works are dispersed covertly, often lurking in dark corners and eerie chambers, and tracking them feels akin to hunting for Easter eggs in a haunted house.

The journey begins at the entrance to the techno club Tresor, a concrete passageway that famously enshrouds patrons in total darkness for the span of a few meters. Unable to see even your hand in front of your face, you become dependent on your ears for orientation. For 14 years, thumping kick drums lured ravers deeper into the club’s concrete labyrinth. After a year and a half of silence, a new kind of siren beckons visitors onward. A sound installation by artist and producer Pan Daijing, Seal, leads visitors to the abandoned dance floor with the words “sweat, sweat, sweat” as its refrain.

In other passageways, new works presented in a dramatic fashion include a stop-motion film by computer art pioneer Lillian Schwarz (soundtracked by the Chinese producer Hyp11E) and a haunting, self-automated video game created by Viktor Timofeev. After ascending five flights of stairs, visitors reach an impressive, cathedral-like space that was previously inaccessible to the public. Already high on the rush of what feels like trespassing, the guided group is hit with a wall of sound by the Chicago native (and ex-gigolo) Hieroglyphic Being, whose composition blasts through the Killasan sound system. Suddenly, Gaillard’s faceless inflatable man shoots up to the ceiling, performing an improvised choreography that, by nature, can never be repeated. The infamous plastic bag scene in American Beauty comes to mind.

Though simple in its execution, Gaillard and Hieroglyphic Being’s collaboration was poignant in its messaging, resonant with our hopeful approach toward the “end” of a period of relative stasis. Atonal’s theme this year is “Metabolic Rift,” a reference to Marx’s theory of man’s irreparable alienation from nature. The event’s atmosphere, however, was charged with the prospect of reparation and reconnection, following the localized rift between a city and its nightlife. Everywhere I looked, I saw the ghost of dancers past – and a communal excitement for a future filled with dancers to come.

The nightlife narrative is explored overtly in MFO and Lyra Pramuk’s and installation inspired by parking lot raves in which various destroyed cars were equipped with miraculously working sound systems – and present in the subtext of pieces such as Adameyko Lab and Vladislav Delay’s projections of super-sized bacteria anxiously dancing and gyrating. The festival coincides with the resurrection of the Berlin club scene: venues can host mask-less parties indoors again, and Berghain reopened this past Saturday, replacing Christian and Karen Boros’ “Studio Berlin” exhibition with dancers who are thrashing off a year and a half’s worth of stifled, kinetic energy well into Monday.

The air of tragedy, fear, and loss that blanketed the Boros show had already dissipated at Atonal, which opened in September as if to further inflate hope for the fused revival of its creative and nightlife communities. I was impressed by the ambitious Metabolic Rift, but the uninhibited air-dancer was distracted by gratitude for the techno temple’s crawl back toward pre-pandemic functionality. Between Daijing’s dancefloor “sweat” and the fly guy’s flounce I had an auspicious realization: these interventions can now exist in addition to, and not merely as replacements for, the “real thing.” The current situation is subject to deflation, too, our celebration vulnerable to the winds of viral change and the threat of stillness looming. Atonal’s urgent imperative, in short, is “wiggle while you can.”

WESTBAM: You Need The Drugs

Atonal, Decentered: What is a festival?