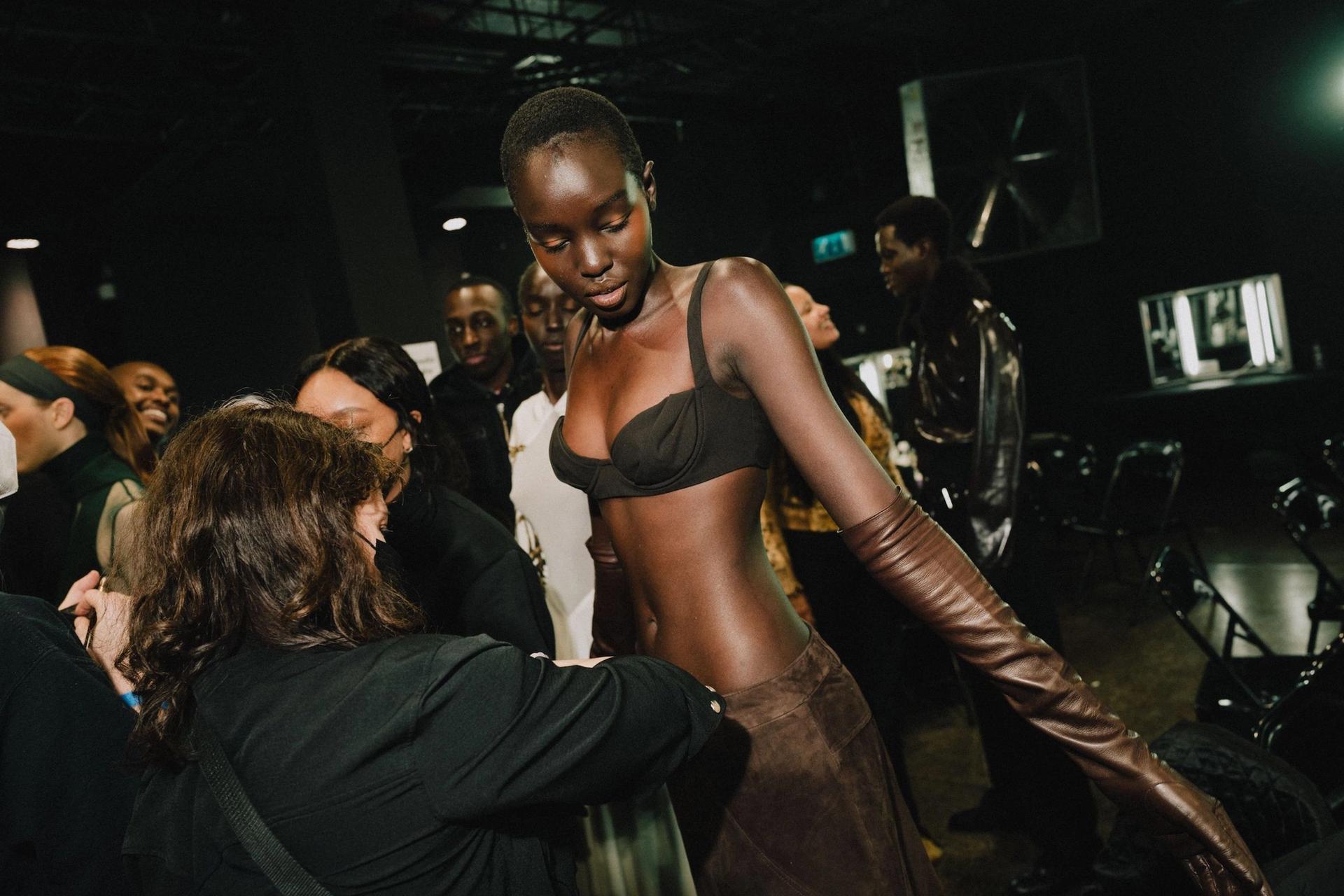 Your Backstage Pass to MAXIMILIAN's Final Show at Fashion East

Six garments (and quite a few DMs and phone calls) was all it took for Maximilian Davis to be accepted into Lulu Kennedy’s fashion incubator, Fashion East, in 2020. Kennedy’s non-profit, whose alumni include Kim Jones, Martine Rose, and Simone Rocha, also helped launch the career of Davis’ mentor, Grace Wales Bonner. After years working as a junior designer at Bonner’s atelier, Davis’ best friend, the designer Mowalola Ogunlesi, finally convinced him to launch his own brand.

The first Maximilian lookbook was dropped in the summer of 2020. The vivid colors of the brand’s visual world, and the clothing it revolves around, were a pictorial distillation of a racial justice revolution unfolding in real time. The viral campaign, styled by Ib Kamara and photographed by Rafael Pavarotti, was a poignant critique of an industry that has long framed “elegance” as whiteness – and was a model of futurity in an industry obsessed with legacy. Drawing from the emancipatory significance of Carnival traditions in the Caribbean, Davis – who lineage is in Trinidad – deployed a sartorial celebration of Black beauty that that promised to relieve fashion’s gatekeepers – in London and elsewhere – of their duties.

“The clarity, confidence, and level of execution has sent people sideways,” said Kennedy of the explosive response to Maximilian’s debut. In the short two years since, Davis has become one of Rihanna’s favorite designers, dressed Michaela Coel for her history-making moment at the BAFTAs, and earned a reputation among editors and stylists as London’s newest prodigy. It should come as no surprise that Davis was among the group of designers voted “Most Likely to Succeed” in our London Fashion Week Fall/Winter 2022 Yearbook Superlatives. But the 25-look collection Maximilian presented this season –which is his final for Fashion East –was enough to earn him the title of valedictorian.

On the evening of February 20, 2022, audiences arrived to the E1 nightclub properly wet – it was raining – and visibly excited to for the three act show, which included presentations by designers Jawara Alleyne and Chet Lo, before closing with Maximilian.

This season, the designer reprised the autobiographical experiment/research developed throughout the history of the brand, telling the story of his family’s relocation from Manchester to rural Shropshire – an event that coincided with a renewed devotion to religion at home. “Ever since slavery, Black communities have looked to God for strength, for a belief that this will all come to an end, for security and guidance,” Davis said. “What else has there been to look to for answers? They had each other, and they had God.”

Davis’ garments toyed with the role of the uniform in his life as a Catholic schoolboy who would look out the window in awe at the leather ensembles of the bikers he saw on the winding roads of his daily commute. Use of leather, suede, and satin alluded to perceptions of perversions and fetish, while quilted jackets and padded wool sets nodded to his ongoing study of 19th century Caribbean equestrian-wear. Each look was an impressive showcase of the designer’s technical skill –he has as much as command of sharp tailoring as he does of ethereal draping – and standouts included a chemise gown with hand-painted biblical thorns and chocolate brown outerwear that carried the sexual charge of underwear. His closing look was a cowl-hooded gown in lavender crepe: a mark of Davis’ faith in the heavenly body.

We sent photographer Rowben Lantion backstage to capture the Maximilian buzz from behind the scenes. Davis has officially closed his chapter at Fashion East – as a semi-finalist for the LVMH Prize. Many in the industry (myself included) are placing their MaxBets on Maximilian for a 2022 victory.

KIM JONES INTERIORS: A Room of One’s Own