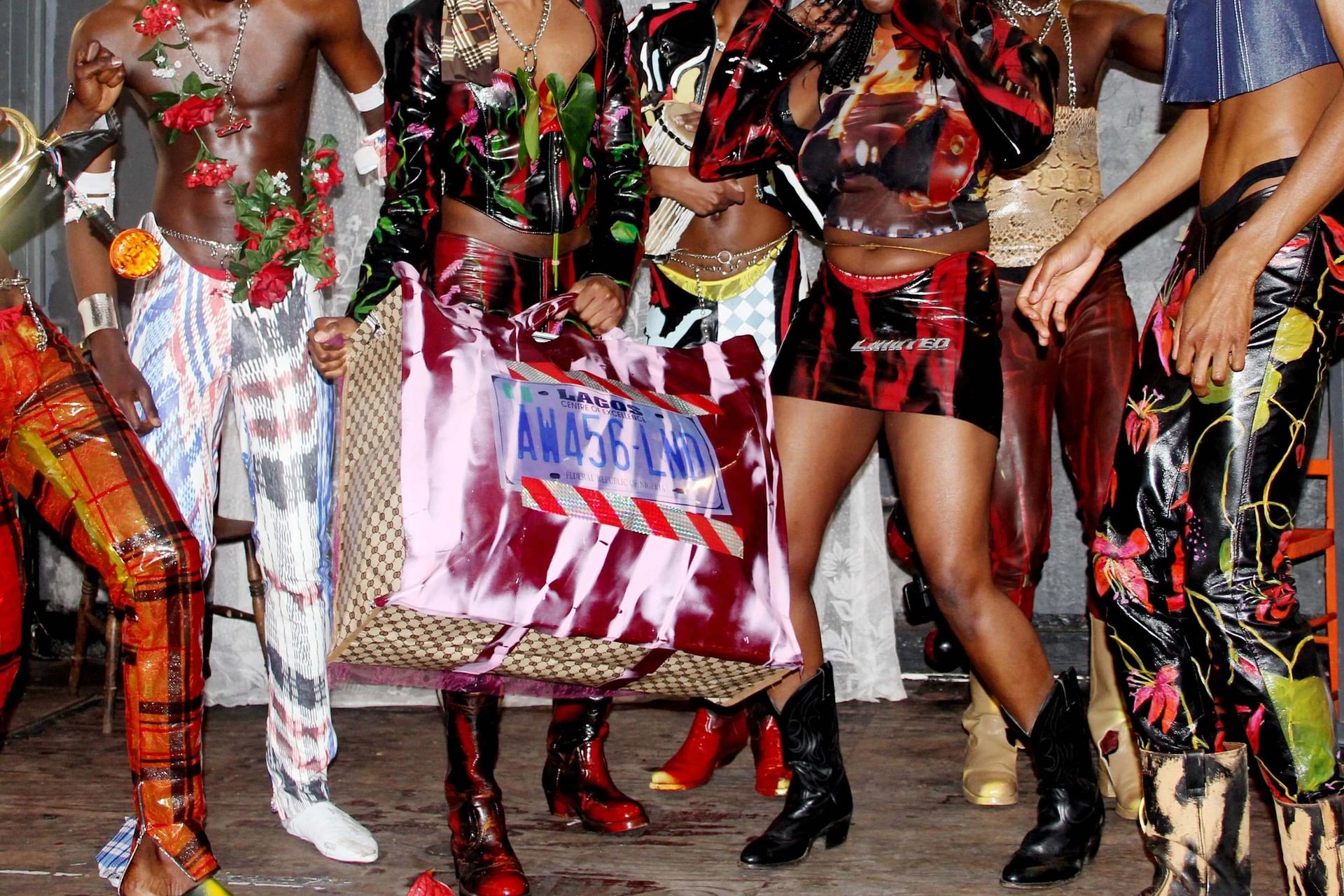 In the debut menswear collection by Nigerian-British designer Mowalola Ogunlesi, the dizzying chemicals and heavy materials of a roadside Lagos gas station are fused into a psychedelic catwalk from the (retro) future. The young Central Saint Martin’s BA Fashion graduate’s degree show, titled Psychedelic, splashed tight, seductive leather garments with dappled print and paint; the accompanying lookbook, styled by Ibrahim Kamara and shot by Ruth Ossai, is a maximalist convergence of styles and influences, from Okada and Danfo taxi drivers to 70s and 80s funk rock bands such as Ofege and The Funkees. Ogunlesi describes her approach to design as a celebration of the “culture, sexuality, and desires” of a pan-African masculinity, and alongside cowboy hats and big accessories crafted from luxury car pendents, curving waistbands draw the eye down to where bright lacy lingerie peeks out – a spark of humor to contrast with the louche, default machismo of the auto shop.

Ogunlesi is a third-generation designer. She was born in Nigeria, moved to England to attend an all-girls boarding school in the English countryside at age 12, and now lives in London. Yet Lagos is foremost in her work, with which she creates an escapist parallel of the African megacity, permeated with a sense of density and frustration, necessity and improvisation, but also of experimentation and fun. Solange Knowles wore an Ogunlesi outfit in her Dazed cover shoot. Praise from tastemaker goliaths Kanye West and Skepta and a commission to create and style outfits for a Nike World Cup promotion featuring the Nigerian team earlier this year have built anticipation for the designer’s forthcoming collection, The Pleasure of Pleasure. Over Facetime, Katja Horvat spoke to Ogunlesi about contemporary fashion in Nigeria, the role clothing plays in sexuality, and a future without limits.

There are over 250 ethnic groups in Nigeria, and countless styles. What inspires you the most?

I find Yoruba people very fashionable, but I’d say Igbo people take a lot more risks. There’s something quite special in their chaotic selection of clothes and colors.

How do you find the fashion scene in Nigeria today more generally?

There was an obvious echo of disco, funk, and certain aspects in Afrofuturism in the looks from “Psychedelic”. What role does music play in your life and work?

Music is always present it allows me to disconnect and be fully immersed in my thoughts. The music I listen to has a unique energy that challenges my way of thinking and gives me confidence when creating.

Do you think pure invention, in fashion, is ever possible?

We are all inspired by the things around us. I am inspired by music, but I think true innovation is creating your own world, so even if people steal your ideas, your style is still very recognizable to you as a designer. Right now I’m really interested in dressing to seduce. I am trying to locate and define a male sexuality that is not hyper-feminine, not hyper-masculine, but a mix. There’s something about what we associate with both heterosexual and gay male identity that is attractive, and I want to examine that.

Sexuality has been there since the beginning in your work. How do men respond to it?

I think it depends on the type of man. The man I want to dress is not afraid to celebrate his masculinity in different ways. But I find a lot of guys are a bit hesitant at first. Once they wear my designs, though, they often tell me how powerful they feel.

Have you considered doing womenswear?

I’m open to it when the time is right, but right now my focus is on menswear, and making men feel more comfortable expressing their sexuality through clothing.

Would you say Nigerian culture is open in terms of sexuality, in general?

Yes and no. Often people are afraid to express their sexuality because they are afraid of being judged, but it varies. In the household I grew up in, for example, it was normal to call someone sexy. I called my mum sexy when I was ten years old, and I didn’t think it was a problem, nor do I now. We had to make mother’s day cards at school, and I wrote “Happy mother’s day to my sexy mom,” which the teacher found really problematic. As a nation, to this day, we don’t speak much about sexuality. There’s a lot of shame around it – something I want to try and change through my work. I want to change the perspective, to bring a certain amount of openness to the topic without a sense of prejudice being attached to it.

Would you say there are foreign misconceptions about sexuality in Nigeria, with people thinking of figures like Fela Kuti and his 27 wives, and other stereotypes?

I think men in Nigeria have a misconception of how to express sexuality and may think dominating women makes them appear powerful. But I have a completely different idea of what a strong man is, and that’s what I want to bring attention to in my work.

Is there a statement on technology in your work, too? Are you influenced by the different ways creative scenes interact with technology, and by ideas about the future?

I am grateful for the way technology connects the whole world, as I have met people online that I would not have seen nor had access to otherwise. My interest in technology is very much about sharing information and exposing people to a different narrative, making them question everything they were taught/told to believe.

The Lexus and Mercedes-Benz emblems play a pivotal role in accessorizing your looks. Why?

Because it’s just so random! It has a lot to do with making something out of nothing, which is something a lot of Nigerian people can relate to. Being fashionable at all costs regardless of your economic status. Turning bootlegs and fakes into something fabulous.

If you had no limits – economic, practical, technological – where would you like design to take you in the long term? Where would it take your collaborators and community?

I design and create for the kind of world I desire to live in, where black art is celebrated, owned by black people and not stolen. Where men and women are able to express themselves sexually without being judged or labeled. I feel as humans we are all multidimensional and do not fit into societies set conditions. I’d like for people to be able to believe in themselves trust their ideas and use their voices as we are all powerful. I collaborate with people I know that share my vision and have strong ideas of sparking change in the world through their art. I will continue to expose people to the world of the Mowalola man in a sort of disconnected dreamlike way.

Do you ever see yourself at the helm of a bigger brand? There are a lot of rumors out there . . .

I really have the urge to create something on my own, something that people like myself can identify with, because I still feel like there are not many black-owned successful brands out there. Everything is still predominantly white. Also, me working for someone else would be a waste of my own voice, because I would have to do what they want, not what I want. Although I love collaborating with like-minded creatives, I want to maintain control over my own work.