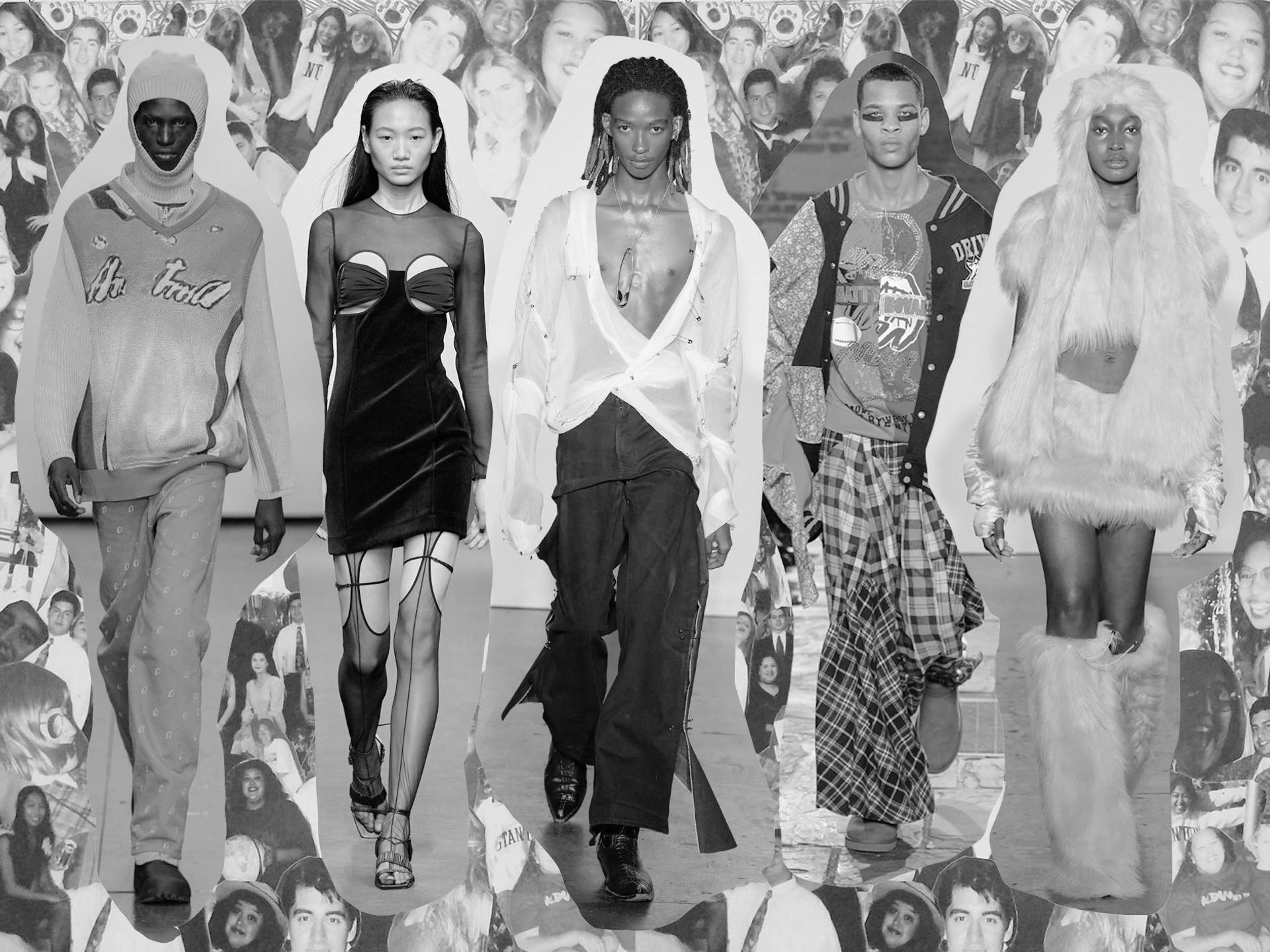 I touched down at Gatwick airport at 8am on Feb 18, prepared to be blown away by London Fashion Week. Not by the clothes themselves, but rather by superstorm Eunice, which battered the city with record-breaking winds on LFW’s opening day. To my surprise, it was the enthusiasm for London’s young designers, rather than the inclement weather conditions, that knocked me off my feet.

If Paris is a playground for fashion designers, London – which is home to Central Saint Martins and Fashion East – is a playground for the promising fashion student. It’s a city where designers come of age, and where talent budding in the safety of the school system can indulge the depths of their intellectual curiosities and artistic impulses. While some consider London Fashion Week’s proximity to the academy as grounds for dismissing its professional significance, others (including myself) argue that this is precisely what makes it interesting. And what LFW lacks in prestige, it makes up for in audacity.

The work showcased in London this season was by no means of student quality, but many of the spotlight-grabbing designers, such as Richard Quinn, embody the radical, idealistic, and liberated spirit of the student. Less-established designers lack capital and visibility, but with “success” comes increased responsibility, scrutiny, and demands to appease. London’s distance from the beating heart of the industry was visible in the best possible way this year, as designers offered up buffets of unapologetically impractical and utopian fashion spectacles. Seemingly unburdened by the parameters of pragmatism and commerce, these post-quarantine explosions of creativity were exactly what the doctor ordered after a harrowing, two-year hiatus.

Designers Conner Ives and Matty Bovan took audiences rather literally back to lockers and gymnasiums by exploring the mythos of the American high school, which feels heightened in the wake of school closures and mask mandates. Ives’ collection, “Hudson River School” paid tribute to the women and archetypes that defined his education in New York, while Bovan’s “Cyclone” distorted cheerleading outfits and varsity jackets with Sex Pistols-era, cut’n’paste chaos. Body exposure abounded on the runways of Nensi Dojaka, Maximilian, David Koma, and Supriya Lele, whose sheer fabrics, receding hemlines, and generous cut-outs speak to pandemic buyers who – like students with raging hormones – are horny for connection and hungry to be seen again.

Now that LFW school is out for summer, it feels appropriate to commemorate with the contentious tradition of yearbook superlatives. The votes (aka my votes) have been cast for the Fall/Winter Class of 2022, and the winners are as follows:

While the cartoonish silhouettes and bold colors of Quinn’s latest collection are extremely theatrical, Richard Quinn’s designs have also caused drama. The designer, who was “Diet Prada-ed” earlier this week, was the first British designer to have the Queen of England attend their fashion show. In 2020, the designer also stirred Met Gala controversy, when Amal Clooney dropped her Tom Ford look at the last minute, opting to wear Quinn instead.

In his Fall/Winter collection, Quinn served design drama with full body floral prints, eye-mask/sun hat hybrids and various no-necked, hooded silhouettes – which transformed model Irina Shayk into a fashionable rendition of female genitalia, and another model into a vine of cherry tomatoes. As was proven by Cardi B, who stormed around Paris Fashion Week dressed as a green pansy in a much-memed look, Quinn’s designs are viral fashion gold. This presentation’s internet-breaking look was a full Venus in Furs moment, when Ru Paul’s Drag Race winner Violet Chachki emerged in a latex bodysuit, walking another model in a dog-shaped gimp mask on a leash. End scene.

The dancer-turned designer Saul Nash is the clear winner of this category, both audibly and conceptually. Titled “Ritual,” his Fall/Winter collection explored the spiritual traditions and folklore that shaped his Afro-Caribbean household. “I was born in London to a Bajan-born Guyanese mother, and it’s always interested me how much I was immersed in these cultures in a place so far away from them,” the designer shared.

The show opened with a short dance film created in collaboration with Fx Goby. “We set the film in a barber shop, which for people of color is a great equalizer; a true common ground,” Nash said. “I’m interested in the ties that bind people together.” The poetic and emotive video was dedicated to Gee Artery, one of London’s first Black barbers, who died last month at age 86. After the film’s conclusion, the young male cast emerged and performed the choreography live on the runway, dressed in “Ritual” looks.

Nash’s sportswear included exciting new features this season, like jackets, detachable sleeves, and hoodies, which were shown with merino wool jacquard tops, and track pants with mesh surfaces. There were two graphic motifs in this collection: the first was distilled from a projection of the Guyanese flag, an act that Nash compared to waving a flag at a carnival. For heightened team spirit, Nash made baseball jerseys with the word GUYANA lettered across the chest. The second graphic was an homage to the water spirit, a symbol of renewal in African folkloric tradition. This took the form of a mermaid, which appeared on wool compression layers and nylon tracksuits.

At the show’s conclusion, the audience erupted with cheers and applause when Nash jogged onto the catwalk, almost levitating with adrenaline and gratitude. As was made obvious by the energy in the room, Nash is a designer that many people are rooting for.

If the Mad Hatter and Uncle Sam had a baby in Wonderland, it would wear Matty Bovan’s new collection. Presented in the throes of superstorm Eunice, the aptly titled “CYCLONE” presentation drew inspiration from the two months Bovan spent in the States in the peak of the Omicron shitstorm. Drawing inspiration from Americana tropes and inventions – namely the concept of the "teenager" itself – Bovan made fiendish nods to cheerleading uniforms and letterman jackets, and fucked with the flag in a way that was more Sid Vicious than Jasper Johns.

Irina Shayk opened the show at The Crypt at St-Martin-in-the-Fields (indeed a venue title) dressed as a scarlet puffball. The lovable, sartorial chaos that ensued included dystopian, upcycled renditions of iconic classics, like Calvin Klein jeans, Adidas tracksuits, and the Alpha Industries flight jacket, many of which were then personalized with Bovan’s paintbrush. After two years in isolation, the designer wanted to create clothes that were very tactile in nature to counteract the flattening effect of digitalization.

He described the palpable friction in the US as artistic fuel: “America held a beautiful excitement that I readily embraced, including all of its challenges,” Bovan said. “My work has always played between reality and fantasy, and this friction is key to my universe.” In a statement, Bovan acknowledged his use of the American flag, suggesting it “belongs to no one.” If Bovan were to make this proclamation aloud in certain parts of the country, trouble would surely follow.

“Get your goggles at the ready!” urged the Irish upcycling wizard, Robyn Lynch, in her collection statement. The Fashion East alumnus made her runway debut with a series of looks designed for a crew of rave-loving Irish lads’ ski holiday in Switzerland. This season, Lynch collaborated with the outdoor brand Columbia, repurposing their jackets into outer and activewear with surprising details, like puffers with scalloped edges and nylon fabric made of ocean waste.

Described by Tim Blanks as an “Irish Junya Watanabe,” Lynch has been heralded for her unorthodox approach to mixology and her inventive homages to Irish tradition and youth culture. This season, her tributes manifested across the collection in a semi-abstract graphic that mimics the outline of the island she calls home, in a print that is subtle to those who are not Irish and obvious to those who are.

Lynch’s father’s vintage Dublin football jerseys were transformed into high-tech knit pieces throughout the collection, in an inventive marriage of hooliganism and Web3-era aesthetic. She catered to other athletic endeavors with vintage-sourced hiking pants, knitted balaclavas, and glitchy-looking cycling tops. Whether your definition of sportiness is biking up the Irish coast or dancing in all night in a club, Lynch’s clothes have got you covered.

Life of the Party: Conner Ives

Recent Central Saint Martins graduate Conner Ives – who was scouted by Rihanna when he was still studying – made his runway debut this season with a collection that nods back to his pre-collegiate school days, called “Hudson River School.” The title references a mid-19th century art movement that began in the part of New York where Ives was educated. Each look drew inspiration from a different female archetype, inspired from actual figures in his life and characters from Y2K movies and shows, like The Devil Wears Prada and America’s Next Top Model. His styling this year was also something to write home about, as Ives bedazzled models with rainbow rhinestones and decorated their hair with butterfly clips and tiger-striped highlights.

Second-hand clothes make up 75 percent of Ives’ raw material, making him yet another expert up-cycler. Ives, however, doesn’t shy away from nostalgia, and instead heightens the previous lives of things like piano shawls, which were repurposed into gowns this season. Mixing costumey 70s looks with witty text, Ives’ eclectic vision felt reminiscent of a scrapbook (or, for Mean Girls fans, a burn book). The designer’s charm is his sense of humor, which allows for his uncanny ability to inject a “grandma-core” aesthetic with club kid gall. The legibility of his pop cultural references makes the “fun” of his fashion something that’s universally accessible.

While many of his looks are indeed (and perhaps only) party ready, the collection’s statement was a serious reclamation of the role of passion in design, which he described as a “dirty word” in fashion academia. “If I am remembered for anything,” the designer said, “let it be for passion.”

In a recent interview with Business of Fashion – who declared LVMH prize winner Nensi Dojaka “London’s fastest rising star” – Dojaka said she would “hate to describe [her work] as sexualized.” Given that the Albanian-born designer’s lingerie lineage is evident in everything she does, she later clarified that her irrefutably sexy work is about women “taking control of the gaze.”

Her M/O was reflected in the show’s casting, which included the model Paloma Elsesser and closed with pregnant Maggie Maurer, in an ethereal, sequined gown. Dojaka’s sartorial sensuality is not merely enchanting audiences and “it-girls” like Zendaya and Bella Hadid, it’s flirting with stardom itself.

Most Likely to Succeed: Fashion East

This year, the show opened with Jawara Alleyne, whose collection contrasted billowy, white fabrics with severe cuts and safety pin attachments. It defies odds in feeling both breezy and dark, reflecting the dichotomous reality of Alleyne’s childhood as a queer person in Jamaica and the Cayman Islands. Next up was rave-darling Chet Lo, whose signature, spiky, 3D knits are ready-made for a roaring nightlife revival, and identifiable on pop stars and Instagram feeds from a mile away. In his new collection, Lo presented more MDMA-friendly fabrics, including ultra-fuzzy garments in baby blues, satin accessories and outerwear, and feather-outlined silhouettes. The Fashion East presentation closed with the incubator’s honors student, Maximilian, whose lauded marriage of Black elegance and British sartorialism has already positioned him for industry takeover.