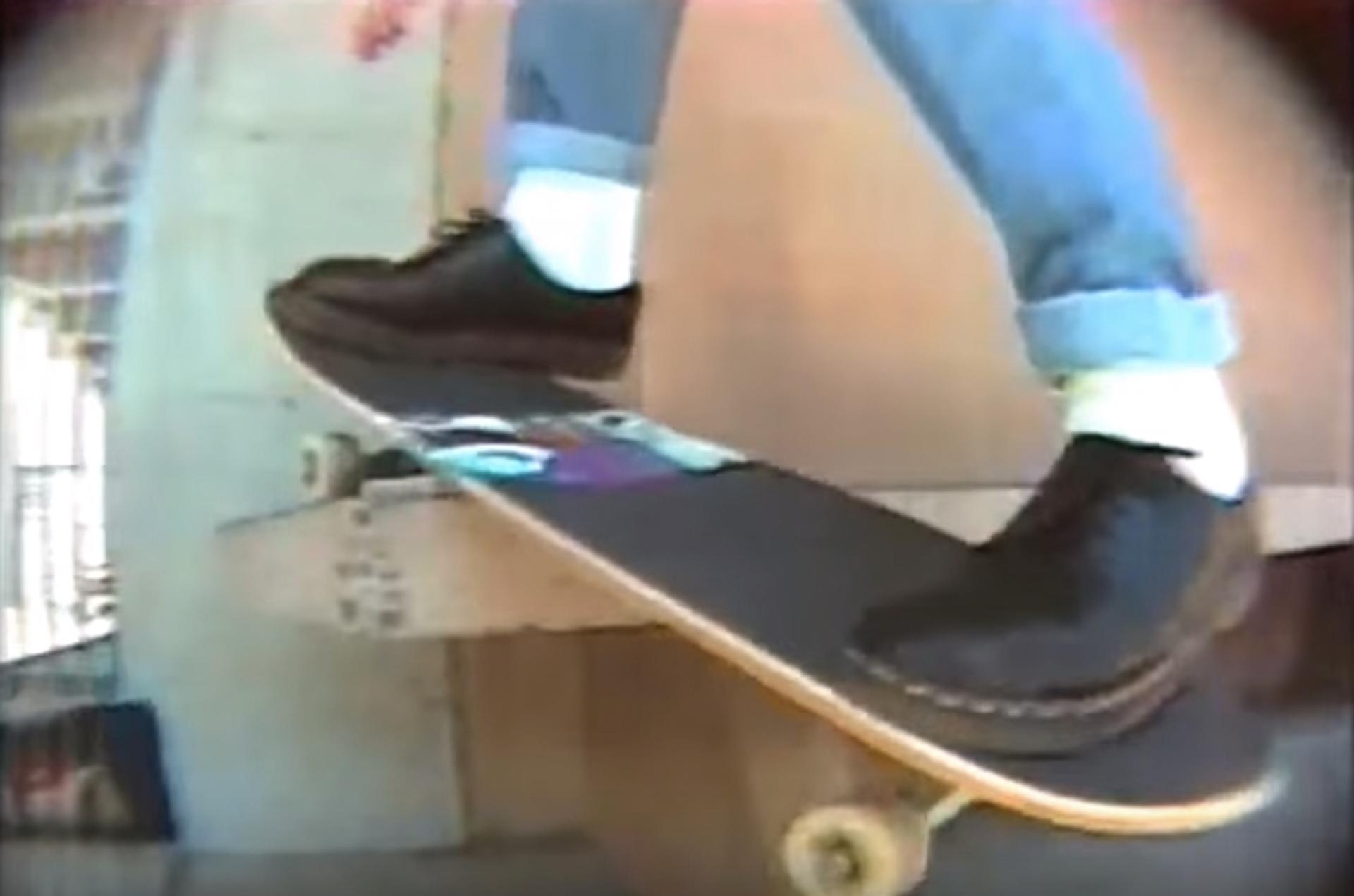 For the last few months, cult skate site Jenkem has been running a popular video segment entitled “Can It Skate?”In it, a particularly competent skater pushes and flips their way around NYC wearing an inappropriate choice of shoe. What started with the adidas Yeezy 350—in a bid to upset the legions who had missed out or paid big money on eBay—has evolved to include Gucci loafers and Nike flip flops. The answer each time, incidentally, is that when its on the feet of a skater of Jason Byoun’s caliber, it most certainly can skate—if only for a short time.

But skating the “wrong” shoe is nothing new.

There are many essays and theses on the subject of skateboarding, and how the culture’s participants choose to appropriate the city around them. It’s a topic that made it to the broadsheets during the recent battle to save the famed undercrofts at London’s Southbank.

Given skateboarding’s ascent in popularity after its early 1990s underground status, skate footwear would boom in popularity, with tailored cushioning, extra padding, and rugged materials. Yet, in a mix of sheer functionality and contrarian showiness, the shoes that weren’t created to push and pop have had moments as must-haves in the scene.

Even a company like Vans, as tied to skate as any other brand has ever been, was creating circular vamp Oxford deck shoe basics on its debut (now renamed the “Authentic”) that were not necessarily skate-orientated. Vans’s 1967 store opening coincided with a downturn after a rapid growth, which included its own (short-lived) publications, forgotten mid-1960s debuts of basic skate-specific shoes (as Daniel Schmid and Jürgen Blümlein’s excellent history of skate shoes, Made For Skate explains), and surf brand skate spin offs.

Then skateboarding would rise again through a period documented time and time again, with a slightly rougher edge than the side-partings and handstands of its previous incarnation. Through brief circumstances, the Blazer, a simple 1973 Nike basketball design informed by the bestselling adidas Americana blueprint, would be shot on the feet of Dogtown superstar and new brand owner Tony Alva, and original punk rock skater Duane Peters. Big brand shoes like the adidas Superskate and Skate were barely acknowledged by a skate crowd (though the former would be resurrected in style with a project with the then white-hot Bathing Ape brand in 2003).

As the basketball shoe bulked up, it managed to cater to a new set of aerial feats during the skate craze of the 1980s. The likes of Lance Mountain and Mark Gonzales wore the new Air Jordan shoe, with its bold use of attention-grabbing color, a resilient leather, and air cushioning. While the shoe was created to contain Chicago’s new signing on the court, a skater’s needs took the notion of air far higher. When the shoe was overproduced in too many colors and interest from consumers waned, the skate world was more than happy to buy up heavily reduced pairs. While Nike shied from advertising their shoe in skate publications such as Thrasher (who had featured an illustration of a skater in Nikes on the cover of their first issue, back in 1981), Converse had actively courted the scene, getting their Weapon response to Nike’s bestseller on the feet of some industry greats like Natas Kaupas.

By 2002, when Nike made a bid to re-enter the skate sphere after several failed attempts to create brand new silhouettes, they realized through some smart consultancy that the 1985 Dunk design, a shoe that shares several DNA strands with the Jordan I, was what the market wanted, with just a small sliver of compact Zoom Air technology in the heel. Some well-advised Supreme, Zoo York, Chocolate, and Alphanumeric co-signs gave it the push it needed.

The 1980s would also be the time when the skate-centric lines like skater-owned Etnies, Airwalk, and Vision Streetwear all began to dominate over the big brands. While these lines all found their own creative voices over time, their early designs owned a certain debt to Nike and Converse’s earlier efforts. This is when the era of appropriation seemed to fade away, as entrepreneurs rode a profitable wave during a time of neon excess—that is, until it crashed again.

As a vertical approach to skating shifted in favor of street—and brands like Vision were deemed unfashionable by a dwindling amount of participants in the scene—there were casualties. Etnies founder Pierre André Sénizergues had created a business model rooted in authenticity and could weather the storm, but fashion would change too. By the early 1990s, skateboarding had been deemed dead again as a license to print cash, but maintained an underground militancy evocative of its 1970s attitude.

As club culture in NYC and London embraced throwback styles, and Japanese collectors began hoarding dusty suede sneaker designs, the athletic shoe would enter skate culture again. The shoes of choice were basketball designs originally released during skateboarding’s downtime: the adidas Superstar (originally released in 1969), Campus (a design with roots stretching back to 1970), and the PUMA Suede (originally released in 1968), plus Converse creations from between 1974 and 1976. It was not all old stock either, as brands reacted to the new interest by reissuing a selection from their archive. Tennis shoes made appearances too, notably Rick Howard wearing the pristine white Stan Smith in 1993’s Goldfish. German-born Dennis Busenitz’s recent pro model for adidas played on those Teutonic inclinations with even odder sports performance cues — a hybrid of Copa Mondial football boot looks and a Handball Spezial’s sole.

Some shoes would just be moments in time, only spotted by participants or the most eagle-eyed spectators. Shoes made for another kind of court would get a moment in some much-rewound videos, with tennis designs becoming a brief favorite. Harold Hunter can be seen in a pair of tennis shoes from Italy’s Fila brand in 1997’s seminal Zoo York Mixtape’ video, while Maryland’s Reese Forbes — a frequent patron of unlikely shoes in skating — wore a 16 year old pair of Nike All Englands in an early Nike SB advertisement.

As with basketball styles before it, price played a role, with thrifty purchases from influential individuals elevating some unlikely styles into must-haves. Reebok’s Club Champion shoe from 1984 (rebranded the Club C) had its moment in the magazines before being forgotten. When Nike launched a budget racket sports shoe called the GTS in early 1993, nobody could anticipate that this basic court style, seemingly made with an older clientele in mind, would somehow become a skate pick, sold for next to nothing in chain stores to the likes of San Francisco legend Drake Jones, who wore them regularly and filmed a line in Eastern Exposure 3 wearing a white pair. New York’s Supreme would pay tribute to the GTS’s unexpected boom with special editions in their SS-15 collection.

London’s Palace crew channeled a local style when they made a skate-centric version of the iconic Workout, a multi-purpose health club masterpiece, in 2013. Forbes would also wear a pair of Reebok Classic running shoes, which connects to a rich lineage of showboating in a shoe that veers far from the traditional skate shoe blueprint. While the basic tennis and basketball shoe would inspire legions of performance skate designs from skater-run lines like Etnies, DC, Lakai, and Axion, some skaters chose to wear some more unlikely models.

Bulkier, more cushioned Air Jordan chapters would be worn and wrecked by a new generation. Shoes like the Air Jordan III (worn by New Jersey’s Pete Eldridge and an inspiration for Supreme’s first ever Nike collaboration), the Air Jordan IV (as worn by original Supreme affiliate and Menace team member Steven Cales, who was the first choice to play Telly in Larry Clarks’s Kids), the Air Jordan V (as recently re-made by Supreme, and worn by St. Louis born Brad Johnson, who also skated the patent leather toe Air Jordan XI), and the Air Jordan X (worn by members of the Menace team — noted industry bad boys). A 1996 Air Jordan Low made an appearance in Mixtape because it was surprisingly skate friendly, while the Air Jordan XII’s unintentional ollie reinforcement made it functional elsewhere and popular, fitting given that Jordan played for its team, in Chicago during the late 1990s.

Then there are the genuinely eccentric choices. Levar McBride shredding at Pier 7 in San Francisco wearing an expensive pair of Nike Air Max was unusual, but the skaters who opted to wear an obstacle were the ones well-remembered. If board feel, minimal obstruction, and flexibility are a frequent requirement in a skate shoe, why wear a work boot? Because it was a self-imposed handicap that showed off skill akin to the Jenkem YouTube videos.

One influential dresser who led the charge into a new decade was Matt Hensley, whose appearance in H-Street’s Hokus Pokus video inspired legions of early 1990s shredders. Hensley’s faded Levi’s and white socks hinted at an inclination towards indie music (in fact Hensley is a musician, who plays the accordion in the punk group Flogging Molly), but the easily recognizable yellow stitch on his feet took the look to the next level with Doctor Martens 1461 shoes on his feet. Just prior to that video’s release, suede-headed Bill Danforth had set a precedent by showing his commitment to skin style with eight-eye Docs on his feet for a 50:50 at a Nottingham skatepark.

Drake Jones tre-flipped a gap in a brutal-looking pair of Nike’s ACG trail boots, while Tom Penny, a near mythical British pro, skated a mini ramp in a pair of heavyweight hiking boots made by Portland’s Columbia, which he also forwarded to his shoe sponsor éS as design inspiration for his professional model. Skating a pair of Timberland boots, a style introduced back in 1973, has been a mark of skill and/or a lack of respect for any kind of convention for several years. The much-missed Pepe Martinez wore the bulky wheat-colored bestsellers for a section of 1997’s True Mathematics, as well as Brooklyn Banks tough guy Kyle James and flat-ground master Mike Piwowar. Long Island’s finest, Gino Iannucci even skated a pair of Nike Air Force 1 Mids in the mid-1990s, which, with the brothel creeper size of their soles, seemed like suicide.

To declare a shoe not fit for skate is like deeming a gap or set of stairs an impossible feat. Someone is going to give it a go. NYC’s Cyrus Bennett, now part of the Polar team, wore Air Force 1s in John Wilson’s Sure video this year, and LA’s DeliStatus crew have featured a bootleg-looking pair of Timberlands in a video, proving that the spirit of unnecessary bulk on the feet is alive and kick-flipping.

Sage Elsesser and Sean Pablo have been wearing a special skate version of Converse’s One Star, and adidas recently paid tribute to Joey Bast, Kareem Campbell, Richard Angelides, and Drake Jones by releasing special editions of the Superstars that commemorate their unofficial patronage of the model. Stevie Williams’s and Troy Morgan’s DGK line put out their own take on the Workout-like Fila Fitness silhouette in honor of its impact in the skate scene in cities like Williams’s native Philadelphia. After Supreme and Palace’s celebrations of unlikely heroes—with the appetite for attention-grabbing edits swelling across social media and video sites—expect to see a slew of unlikely shoes being wrecked in months to come.

To Know Russia, You Must Skate It

JASON DILL Takes us to Hell and Back to FUCKING AWESOME