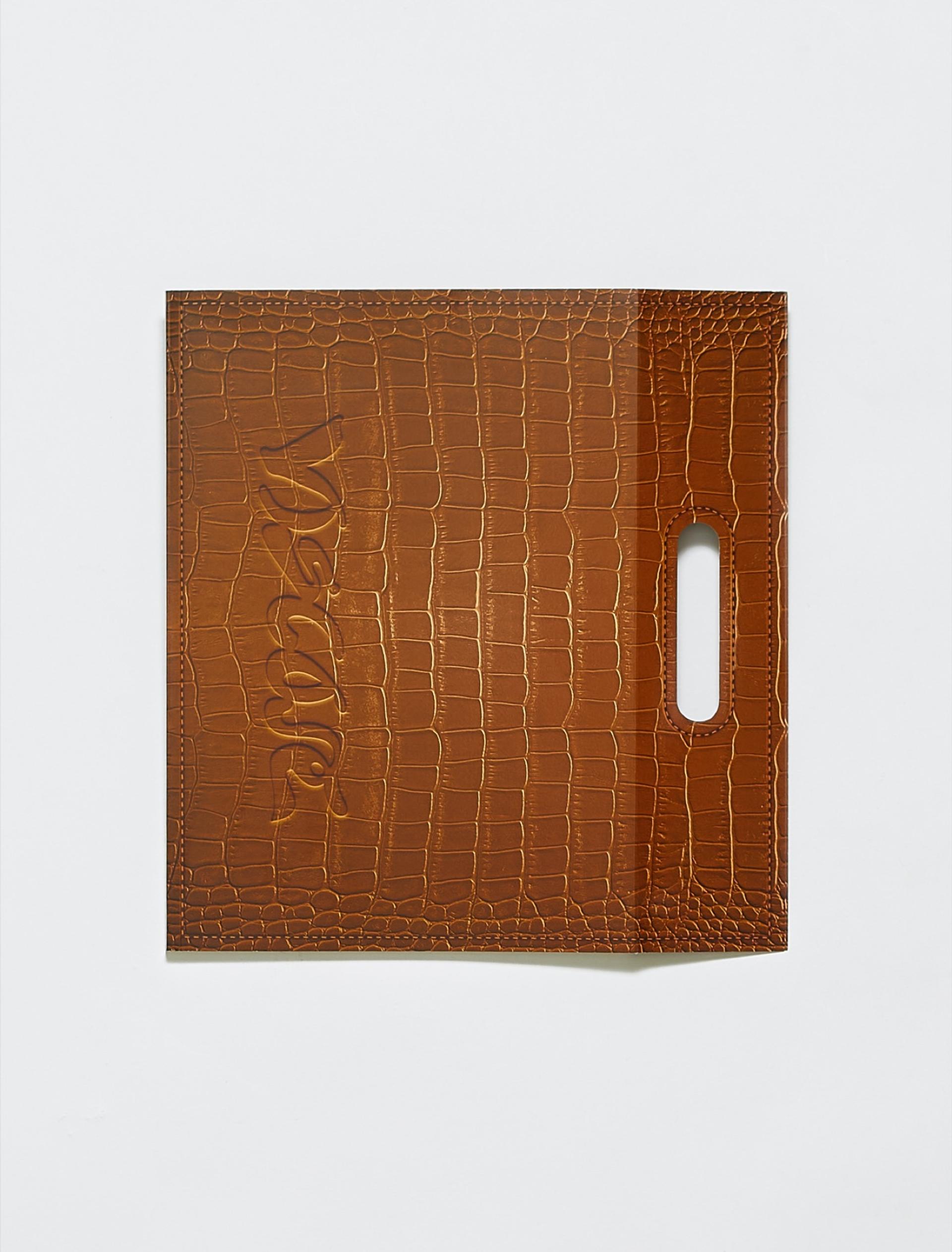 “There is so much in fashion that deserves analysis but which doesn’t necessarily fit the cyclical nature of the fashion season, or which doesn’t fit into some kind of promotional tactic” says Jeppe Ugelvig, founding editor of Viscose, a new journal for fashion criticism. While much of the fashion publishing world operates in tight lockstep with brands, Viscose intentionally breaks with those economies of promotion to create a space for critical reflection. Taking cues from the tradition of art criticism, the inaugural issue of Viscose offers up eclectic mix of commentary on everything from the rise of the stylist as a “hyper-flexible, post-Fordist image worker” to the evolution of “people piles” in fashion shoots.
The issue is also incredibly cute. Billed as the “world’s first bagazine,” it doubles as a stylish print accessory perfect for an era of digital virality. Hoping to inspire new modes of fashion publishing, Ugelvig – along with creative team Filip Samuel Berg, Laura Silke, Cheuk Ng, and publisher Elise By Olsen – will release the next instalment of Viscose to its budding community of fashion nerds this September.

Why the name Viscose?

Like many a magazine founder before me, I was looking for a timeless, iconic name. I wanted a name that felt relevant to the industry of fashion, but that also had a mysterious, slightly esoteric quality to it. We ended up with a synthetic material for a highly synthetic magazine. Viscose was considered the first artificial textile, invented to mimic silk – but it’s actually made from wood-pulp. Viscose has so many uses, and is one of the most ubiquitous materials in the garment industry – it pops up everywhere. Viscose, the magazine, is similarly a very hybrid creature that will inevitably change shape again and again by each issue. Viscose is an attempt to break down disciplinary and editorial boundaries to try to produce hybrid spaces for criticism on the topic of fashion.

Creating that hybrid space is not so easy. The commercial fashion editorial model is based on advertising, and revenue is tied to preserving brand relationships. How important was it for you to avoid these dynamics common to commercial publishing?

The choice of being ad-free is an outcome of many years of working in commercial fashion publishing and realizing what I don’t want to do. My concerns weren’t ethical as much as it was about ensuring critical freedom – brand partnerships and sponsored content tend to make precarious premises for critical journalism. We’re entering an age where relying on print advertising to pay for fashion publishing is becoming more and more unfeasible, especially for new publications. I have seen the difficulty of continuously selling ads from working inside various magazines over the years, and I have also seen how it inevitably ends up compromising the content. Too often, fashion writing in particularly is dictated by the whims and desires of corporate fashion brands who want to move product. Viscose, in its simplest terms, is trying to steer clear of that.

We’re beginning to see various new editorial models for independent magazine, such as long-term brand and institutional patronships or partnerships. Viscose being firmly planted in the artworld, I’ve tried to find a golden in-between mixing funding from academia, retail, institutions, and the grant world. We also formed a partnership with my long-term collaborator Elise B. Olsen, who just launched the International Library for Fashion Research in Oslo. Viscose now serves as its official imprint.

The rise of the patronship model reflects how editorial projects can lend credibility to brands and institutions. It’s almost ironic since the credibility of having an outside person talk about you is exactly that: they’re external. Do you think the fashion world is getting too far away from the traditional journalistic separation between publications and brands?

Advertorial content is one thing, but the real issue is the shocking amount of promotion that happens in magazine spaces that isn’t listed as advertorial. The commitment to lifestyle and consumption, which inevitably ends up involving economies of promotion, runs so deep in the publishing world, from the highest to the lowest, from the most independent to the most corporate. It’s a huge taboo to discuss it in the industry. From a formalist point of view, what the very intimate relationship between promotion and journalism has done is to establish certain stylistic tropes in fashion writing, tropes that I find super limiting. Mostly, fashion journalism is about promoting particular products, lifestyles, or the culture of celebrity. With Viscose, I was looking at the more critical and self-reflexive tradition of art criticism, which by no means have ever stood outside a marketing or promotional logic, but which at least retains some kind of claim to autonomy. I was curious how one could extend this approach into the realm of fashion – go beyond the defined parameters of the industry, embrace research, break open the topic. Could a fashion magazine reject the industry’s seasonal cycles, its pursuit of newness?

In the introduction to the magazine you captured this succinctly, writing, “the apex of fashion journalism seems to be the designer profile or interview – a plain promotional tactic for the corporately-owned brands who can afford it.” But, isn’t the main draw for many people to fashion publications often celebrity or pop-cultural appeal?

Indeed – and in this sense, Viscose ends up looking pretty niche. The modes between art, fashion, and celebrity have always been in flux and continue to change. Celebrities are interesting if there’s something to learn from their celebrity. I think the bigger issue is commercial fashion publishing rarely taking their readers seriously. It would be absolutely naive to say that there are less smart people in fashion than in art, or more superficial people in fashion. Fashion is a form of intellectual production. There is so much in fashion that deserves analysis but which doesn’t necessarily fit the cyclical nature of the fashion season, or which doesn’t fit into some kind of promotional tactic. Viscose is a place to dump all of those things!

This first issue is themed Style. Your personal writing contribution is a theoretical text about stylists, whom you call “master semioticians.”

I think we’re still at the beginning of the age of the stylist – that’s why I wanted to study it. When I started doing research for my book Fashion Work (2020), I looked closely at the modalities of the increasingly image-driven industry of the 90s – for example, how someone like Bernadette from Bernadette Corporation assumed the role of the stylist and rendered herself an artistic/creative author through it. I think we’re still to see the true power of the creative director as designer, or the stylist as fashion author.

Despite becoming highly digitized, the fashion industry is still so dependent on taste producers who command certain social spheres. The most coveted stylists of the moment are known for being deeply steeped in a local or regional social context and aesthetic. This is still what people want to capitalize on – from Lotta Volkova to Avena Gallagher and Babak Radboy, to Joerg and Maria at 032c – increasingly, styling is embraced as a mode of fashion design. Our contributor, Taylore Scarabelli taps into these ideas and practices in our inaugural issue.

I think we’re seeing that the stylist, much more than the designer or the couturier, is someone who’s really adept to digital fashion working. They can navigate very easily this image-driven fashion industry that constantly shifts between various forms of media and content: clothing, spectacle, image, magazine, video, and back again. The designer in that regard looks suddenly like a dusty old figure, whereas the creative director or stylist is this hyper-flexible, post-Fordist image worker.

So the garment, and the art of its creation, is no longer at the center of the industry – it’s image.

Exactly. In many ways, image was always central. But the focus was always on the authorship of the couturier, the ideas of the designer –something which made invisible a lot of fashion workers who instead operated mostly in the background. And that’s what’s so interesting about the rise of the stylist. Up until the late 80s, the stylist was a background worker, offering behind-the-scenes kind of creative authorship. Now stylists have so much power, and more and more are going to be hired as creative directors of brands, effectively replacing the designer. I don’t know how I feel about that, but it’s definitely a diagnosis of the time.

Back to Viscose. The way the magazine is printed is incredibly cute. As you market it: “the world’s first bagazine.”

The whole creative team behind Viscose loves magazine making and loves printed matter. It was very important for us to produce an object that people want to buy and want to collect, not just throw out. I’m a writer and an editor with a foot in academia, so if it weren’t for my creative collaborators, creative director Filip Samuel Berg and art director Laura Silke, the magazine would probably look a lot more dry and dusty, a kind of modern October Journal. For this first issue, we were very inspired by the tradition of artists publishing ephemera of different kinds, and by the Bernadette Corporation’s magazine Made in USA, which purposely shifted style and undid itself as you read it. A lot of the pieces in the issue revolves around Telfar’s recent rise to the mainstream, and the “Bushwick Birkin” as a kind of viral design object. There’s always this desire in fashion to create an object that really taps into the zeitgeist of the moment, and functions as a kind of viral object. What does virality look like for a print magazine? We’re seeing it play out rather vividly now thanks to this simple die-cut magazine jacket – and the catchy phrase, “the world’s first bagazine.”