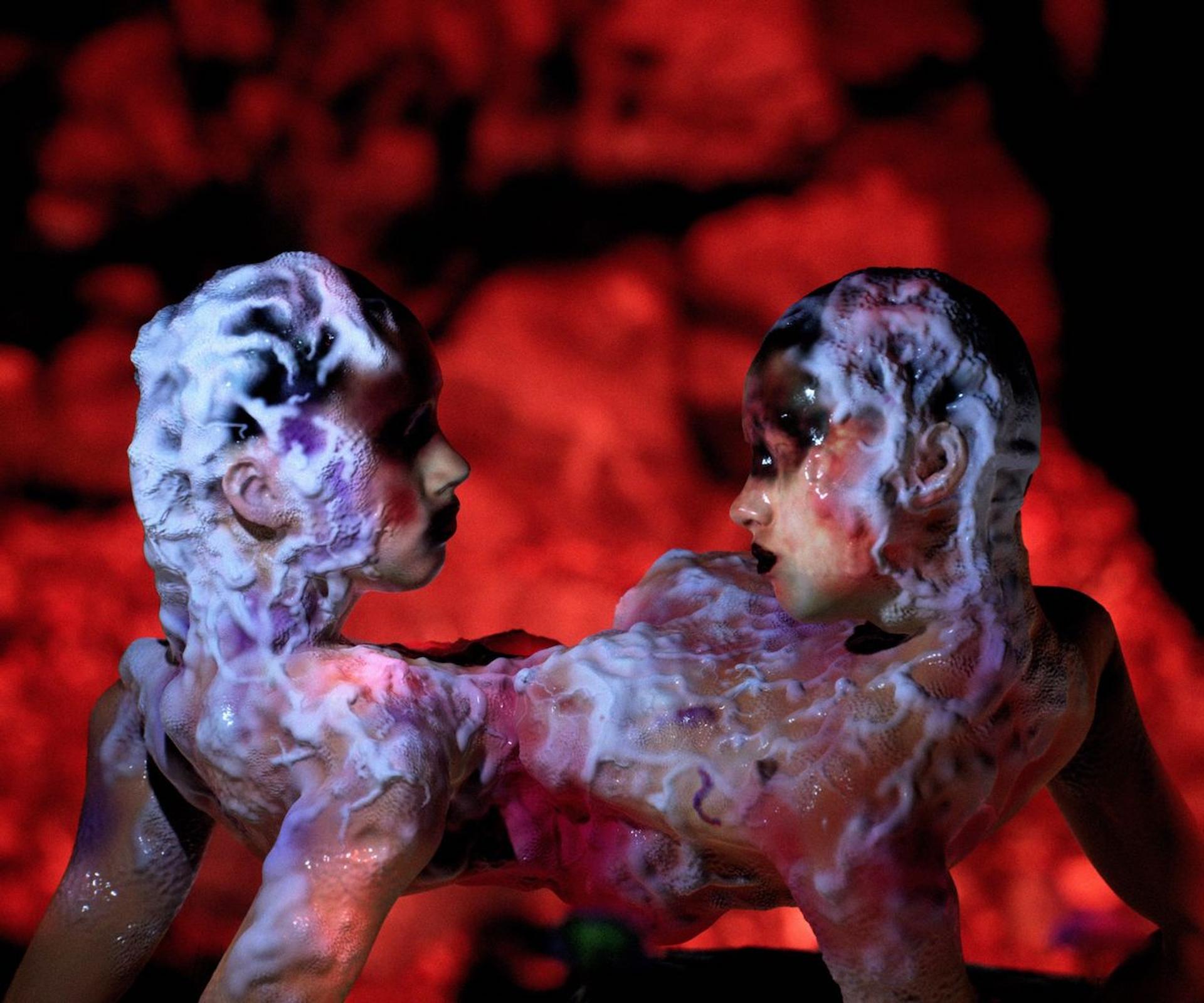 Remove your vaginal eggs. Spit out your oat milk. Bin the crystals. We’ve reached peak Wellness: a saturation point of sun-dried açai and unpasteurized SoulCycle. Wellness is a trend that encourages the pursuit of happiness, and good living, and vigor – an enviable triad that is increasingly monetized in the 387-billion euro health and beauty industry. But while that industry is meant to represent true human vitality – living your best life – it’s actually a virtuous distraction from life’s inevitable conclusion: death. Wellness and its proprietors – think L’Oreal, Shiseido, Esteé Lauder, especially Goop – proffer a gloss of longevity that masks the ultimate human truth that we decay, we expire.

Above the din of wellness signaling, I appoint Isamaya Ffrench as the patron saint of un-wellness. The makeup artist (emphasis on “artist”) creates sumptuous, bewitching faces with fault lines of near ugliness that question our expectations of beauty and health. Every face she paints observes the imperfections that often beget beauty – the grit in the oyster that potentially turns to pearl, the manure and mulch that grow a rose. They are compelling, at once attractive and repulsive, and both dreamily surreal and brutally realistic. Ffrench exaggerates the nuanced foundations of beauty itself, exposing artificial signals of health and our own fragility (and eventual death). Themes of dishevelment, decay, and mortality are rife in her work, as she scrutinizes the temporality of beauty and the certainty of its expiration. The Ffrench face is forever under the weather, poorly but still partying, both slick and unkempt: it’s the thick eyeliner sweated down your face as you leave the sesh at 11am; it’s licking an ice cream with a split serpent’s tongue, or the lesions you’d get from a (somehow romantic) tropical disease. Ffrench’s beauty is always sweaty, stinky, unpretty, yet also somehow available and inviting.

As we find new ways to broadcast ourselves online, and as people’s relationships to their faces are evolving (or devolving, depending on your viewpoint), beauty marketing is getting more sophisticated. In the words of TLC’s “Unpretty,” You can buy your hair if it won’t grow / You can fix your nose if he says so. Weight Watchers terminology has dropped any mention of thinness – stronger and leaner are the goals du jour, and your meals should be “clean.” We’re “clean” eating, and sidestepping the dirtiest of dirty words: diet. In turn, makeup is moving away from “Look prettier!” into a more millennially minded “Look more YOU.” Consumers are sold product that enhances an individuality that is supposed to come from inner radiance, not outward style statements – allowing our supposedly unmediated and authentic “best selves” to shine through.

On the other side of this coin, I see Kim Kardashian and her best self(ie). Her type of perfection is a designed, sculpted sexiness that’s poured into tight clothes, and has spawned an entire movement of identikit contouring contortionists who permeate the industry and define consumer expectations. But combine Kardashian’s culture of manufactured exceptionality with the wellness paradigm and what you have is a new impossible standard that, despite the murky origin stories of its protagonists, says, “Just be perfect – naturally!” Ffrench’s take on the industry is the antidote to this trap, maneuvering the status quo: expressing flaws is her raison d’etre, even the ones that result in the very pursuit of beauty. Sometimes looking past the cute ones, she creates and celebrates the most human of “problems,” with a combination of scabs, scars, and pseudo-science that deftly sidesteps assimilation. On the cover of British Vogue this September was Rihanna, made up by Ffrench with witchy little streaks for eyebrows, evocative of John Waters’ moustache. She was beautiful as ever, but the look was instantly jarring too – it was Rihanna seen through frosted glass, an iconic face diverted but not derailed. Remarkable Rihanna, at once familiar and aloof. There’s a deliberate and grand exaggeration of traditional and modern beauty ideals in Ffrench’s portfolio – her lips are voluptuous but too big, too wet; her pupils contract to pin dots, or dilate to blackness. Her painted faces push at the seams of attractiveness and acceptability with wit and irreverence, never collapsing into farce, and there’s always a sense of bombshell beneath the blotches.

Ffrench studied Product and Industrial Design at Central Saint Martins, and her work is still grounded in design and construction: she’s charting the architecture of our faces by exploring its exceptions, its negatives, its alien counterparts and lunar geographies. Her own face is a starting point for this study, and Ffrench’s self-portraiture serves as a subtle critique on ubiquitous selfie culture as she exposes the duplicity of the beauty media: in one image, her right side is frozen, frostbitten to death, and her left side is parched and baked, cracked like the Sahara Desert. Rather than defining or preaching beauty, Ffrench holds it up for speculation, providing a running commentary on the rules we’ve established.

Tell me about the tension between the beautiful and the grotesque in your work.

If I’m trying not to think about the answer too much, I’d say I don’t find traditional, commercial beauty that interesting. So for me, it’s about keeping the interest. I like finding that sweet spot between the beautiful and the grotesque, and the intrigue in the in between. I’m probably just very desensitized at this point for juggling what’s ugly and what’s pretty.

What is “beautiful,” exactly?

What we call beauty, or what we define in western culture as beauty, is something that’s been shaped by corporations and finance, basically. Advertising has shaped our attitudes toward what is seen as beautiful, which is partly to do with wealth. If you look back, in the past, ideals of beauty have always alluded to wealth – [calculated] in how many cows or chickens you have, or the fact that you have access to more nourishment. Heavier girls in the past were considered more beautiful because they could eat more. It’s interesting right now to step back and connect those dots to see what the mainstream considers beautiful. It’s actually a lot to do with objects, owning things, being able to put things on your face. The rich have created a kind of style that we all want to copy. People just don’t invest in the mind anymore. They invest purely in the body. People really want to see quick fixes and quick solutions. They want to invest in things that they can see, and I think that goes in line with the way things are sold. Beauty has been defined by this corporate mega-structure to sell products, to sell a type of woman to you.

Now, because of social media, people are able to express themselves differently, and be really inventive in new and individual ways – it’s a major backlash to the homogenization of women, and men. We’ve got a new generation that is going the complete other way and shaving their eyebrows and shaving their heads and putting shit in their whatever, and post-Photoshopping. I’m trying to give them a space and a voice now, so it’s almost like allowing youth culture to determine what is beautiful, rather than, you know, the suits.

And you plan looks? Or a mood?

Looks alone don’t tell a story – those aesthetic decisions are secondary, in a way. Our human story is connected to emotions – happiness and sadness, love and hate, and, like, death, all that shit. That’s where I’d like to think my work has something to say. No one wants to be reminded they’re going to die. That’s why in adverts you have babies and young beautiful people essentially going against admitting, “You’re gonna die one day.”

Advertising has played into this whole thing of health and anti-death. A really beautiful, healthy woman, with amazing cheekbones and amazing skin, and long healthy eyelashes and healthy hair – it’s this total disengagement with the reality of life and death. It’s like anti-decay. Exactly. That sounds like a big statement when you’re asking about looks and moods, but I don’t do fucking boring advertorial, if you know what I mean. I want the work to mean something. It does sound silly, but –

It’s like anyone who wants to make something: you don’t just learn how to make it. You learn why to make it.

I think there’s a fundamental thing there, that too much freedom can be destroying, and actually that’s why the Bible or any old ancient text was written, to give people moral codes, to give people limitations. Because if we were free to do anything, we’d basically just be cavemen again.

I did a sort of Jungian psychotherapy thing, but it was heavily influenced by contemporary psychoanalysis. A lot of that is about identifying collective and personal symbols, and I try and do that in my work as well. If you have something that’s already very loaded, the end result is richer. I’m doing this project with this guy who makes grills. Teeth, for example, are so symbolic. You dream about them falling out. And they’re the last thing that dissolves after you die and you’re a skeleton. For pregnant women, all the calcium goes to the baby, apart from [what goes to] the teeth. These are all just really loaded symbols, so layering this thinking will produce a really interesting effect subconsciously, because we know all of this stuff underneath.

So the idea is that the meaning is not always explicit?

One hundred percent. It’s more about trying to create a feeling. But I say this, and then I’m like, “Oh my god, I’m literally doing an eyeliner.”

No, I know what you mean. You know the heritage of the thing you’re using, whether that’s its history, or just the symbolism it contains.

And then sometimes I turn up on set, and they’re like, “We’ve got to sell this eyeliner, off you go.”

See this feature as it was intended, in print, by purchasing 032c Issue #35 at our web store.

Dinner with Gucci and 032c: REFERENCE BERLIN at the China Club