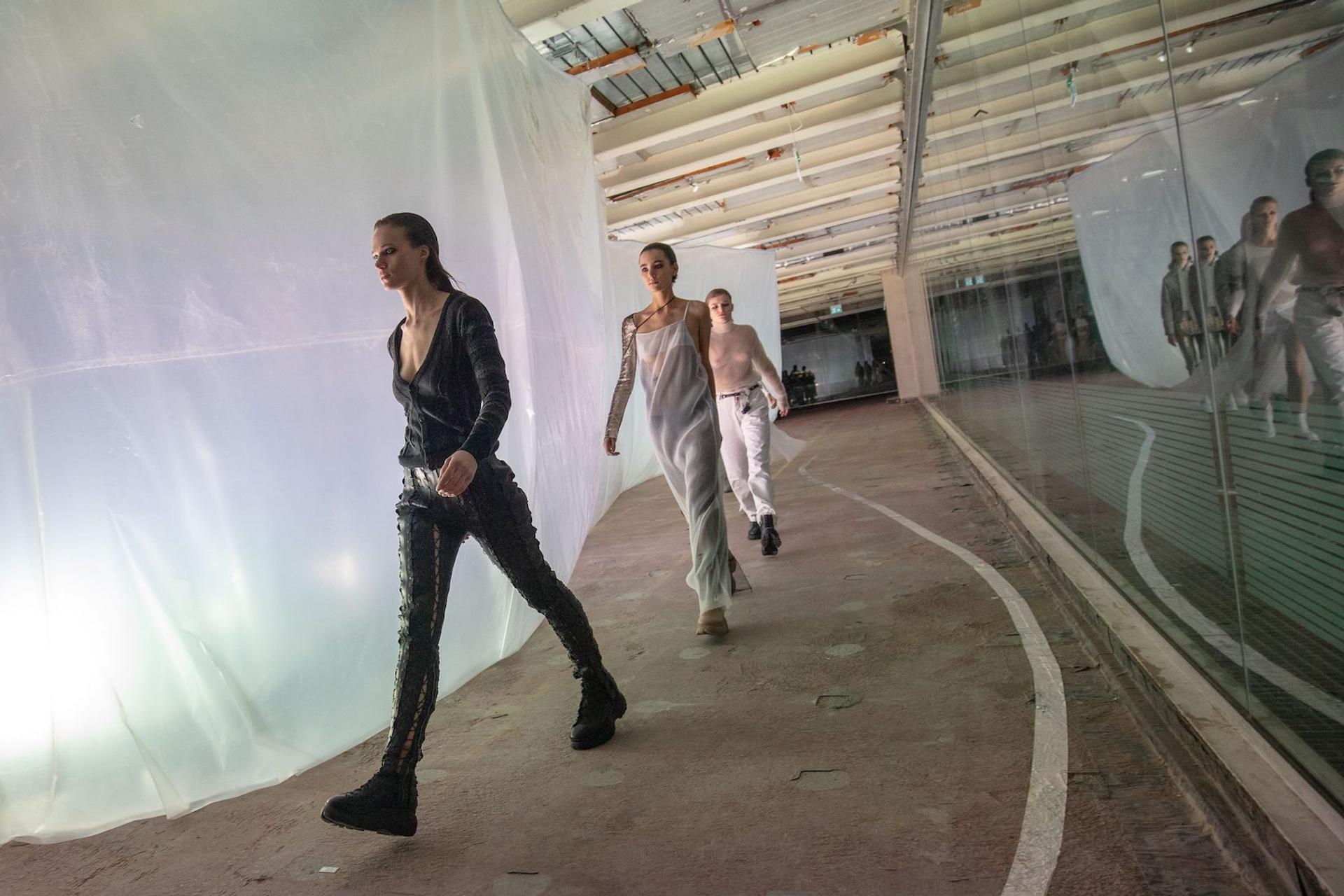 RUNWAY RECAP: 032c Cosmic Workshop at 180 The Strand in London

“‘I love building sites so much,’ Maria Koch, the designer behind 032c’s label, is unexpectedly and enthusiastically explaining backstage. 032c have just staged their first, full, womenswear catwalk show in London, in a building site nestled above The Store at 180 Strand. Backstage is a mess of energy and hyperactivity, a constant stream of hyped-up kids and fashion bigwigs filter past. ‘I kind of fell in love with this space at first sight, this specific construction site,’ Maria continues. ‘How messy and fantastic it was! I really have warm, romantic feelings for construction sites, in general. I find them so melancholic, so beautiful; something is happening, something is changing, something is lost and something new is created. I find this moment so interesting.’ That might as well, as a description, stand in for 032c in a whole –– which is in a process of expanding, developing, becoming.” i-D magazine

032c took over the top floor of 180 The Strand in London on Monday November 26, 2018, to launch its first WOMEN’S READY TO WEAR collection, designed by Maria Koch.

The COSMIC WORKSHOP collection is inspired by the romantic longings of our collective teen years in Berlin, when identities emerge from a tension between your heart and your reality, your self and your generation, and where you are and where you want to be. It’s clothing for the intrepid and the curious looking for a place to belong and to be free out on the street and under the stars, in clubs and in basements, in communal experience and in secret solitude.

Conceived in a palette of black, white, grey, and metallics, the debut collection features layered looks of tulle, chiffon, and generous plissé overlaying sequined logo shrugs and bandeaus. Silk moiré takes the place of denim in two-piece « jean » suits created with double-stitched and riveted detail. Buckles inspired by riding knee-highs appear as a leitmotif in BUFFALO by 032C boots, an equestrian theme subtly reprised in the collection’s intricately composed tops, dresses, and trousers.

Also launched under the COSMIC WORKSHOP umbrella was a 1990s ravewear-inspired expansion of the brand’s apparel and menswear lines. Models included Daniel Hopwood, one of the cover stars of 032c Issue 35 (Winter 2018/2019), and walked in combinations of double-layered parachute pants and destroyed denim, greyscale Intarsia knits, leather fetish-inspired accessories, and outerwear that channeled the energy of early European club culture with the functionality of the workwear that continues to inspire 032c Apparel. Punctuating an austere palate and 1990s minimalism across the COSMIC WORKSHOP collection were pink tones and plush textures in the outerwear and footwear.

For the show in London, 032c transformed the raw central space of the iconic Brutalist office conversion at 180 The Strand into an embodied « cosmic workshop » with the help of Berlin producers Untitled Project, who created a translucent synthetic membrane around the building’s central elevator shaft. As guests entered the space, sound and light pulsed from within the construction like the heartbeat of a new life form, or the bass of a hidden party. Models emerged from the immersive installation to the sounds of German post-punk band Fehlfarben and an unreleased track by Berlin’s Berghain resident DJ Kobosil. Guests included Juergen Teller, Venetia Scott, Jefferson Hack, Robert Rabensteiner, Delfina Delettrez Fendi, Sean & Seng, and rapper Octavian. At the show’s after party, held just downstairs at The Store X and DJ’ed by Lawrence Lee – who also walked in COSMIC WORKSHOP and in 032c’s debut menswear show at Pitti Uomo earlier this year – guests enjoyed a Goldy Gin bar hosted by Justin O’Shea and additional refreshments by Noam Beer.

VOGUE: What has morphed into a flabby generic—aka “streetwear”—was during its first, pre-social-media time around, very precise, modulated, and ripped in its definition. These clothes—especially [Maria Koch’s] womenswear, which was sprinkled amongst menswear merch—expressed that.

GQ: Styled by the magazine’s fashion director Marc Goehring, the collection took 032c’s fashion industry domination to a whole new level, this being the first time – to our knowledge – a fashion magazine has shown a fully-fledged men's and womenswear collection to the international press contingent.

HIGHSNOBIETY: The show cemented 032c’s pivot from magazine and occasional apparel designer into fully fledged designer label, one that translates the visual language of its Berlin roots for a global fashion audience using sheer fabrics and a palette of black, gray, white, and metallics.

OFFICE: It takes a lot to muster a crowd on a cold Monday night, but fashion turned out in force to witness the debut of 032c’s first ready-to-wear women’s collection in London. The Berlin-based brand brought their industrial energy to the city’s 180 The Strand, a Brutalist office conversion in central London.

DAZED DIGITAL: “It’s the idea of when you’re going out and you know it’s going to be a wild night,” Maria Koch surmised. In other words, expect to catch a glimpse of these clothes on a dancefloor near you soon.

HYPEBAE: What initially began as a somewhat wearable extension of the magazine has quickly become a force all on its own …

10 MAGAZINE: “It was a blank space, and we could create our own context. And there’s all the journalists here too – it was a very cold-blooded decision to show in London. It’s not like I was inspired by teabags,” Maria Koch, the creative director of the brand’s apparel side, told us backstage of her decision to show on our territory. And with this nostalgic essence the whole show spoke through, a piece of “old” London came back too. But beyond the emotions, the show just looked like a great brand exercise, a sort of case study for development in this contemporary day and age.

See the looks below:

MARIACARLA BOSCONO in “I do it exceptionally well. I do it so it feels like hell.”