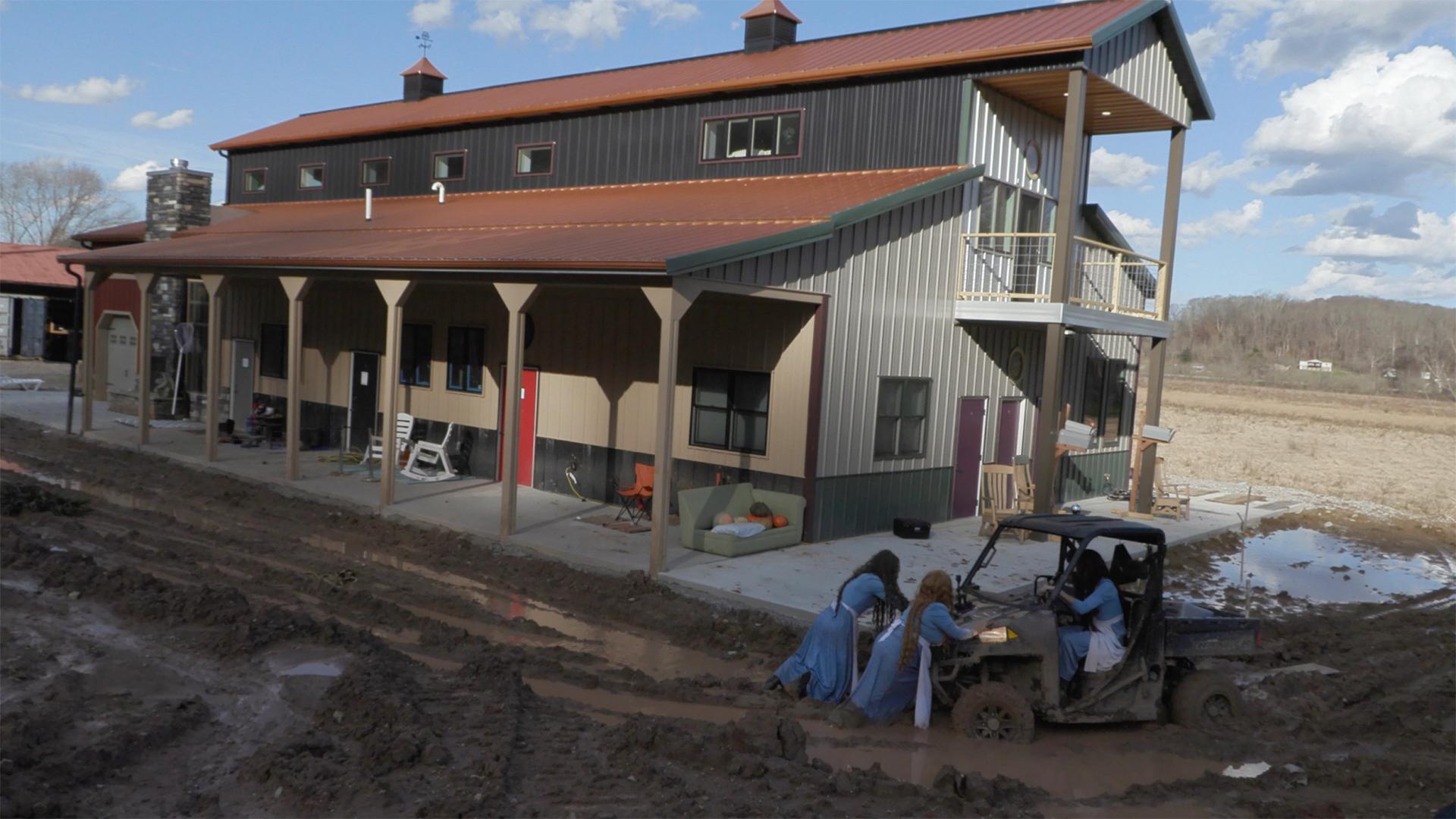 ROT THE MAP: Lizzie Fitch and Ryan Trecartin’s WHETHER LINE at the Fondazione Prada

It’s 2019 and half the planet is literally staring into the void. We live in a place where every action and everyone – wherever they are – can be carefully observed and recorded. Where everything is true but nothing is sure. In this place, Benito Mussolini’s granddaughter calls American actor Jim Carey a bastard and it’s normal. Imagine a map – built by boomers, like everything else that sucks – offering so detailed and exacting a replica of the territory of Empire that it blocks out the sky. Jorge Luis Borges wrote about exactly that in “On Exactitudes in Science” in 1946, creating an image of the virtual that would go on to inform Baudrillard’s most prescient writing about living inside a mediascape object as vast, powerful, and mutable as the land it represents. Welcome, not to the resistance, but back to the Matrix. Or hyperreality, or simulacrum, or metaverse – whatever you want to call it. Welcome most of all to the myriad strange and startling “haunted maps” of artists Lizzie Fitch and Ryan Trecartin.

The first and most obvious of these maps is screen culture, but history is another map against which the artist duo’s epic new body of work Whether Line at the Fondazione Prada in Milan is set. A century ago, Mussolini was forming the Fasci di Combattimento, yet today the city presents as one of Europe’s more cosmopolitan centers of industry, finance, and culture, drawing migrants from across the world – and turning them away too. It’s a tidy juxtaposition for a work that engages so closely with nationalism, borders, and the idea of home. Once again, the examined life is found lived upon Baudrillard’s map, which precedes “the territory whose shreds are slowly rotting.”

The Fondazione is housed in a former distillery, also built at the beginning of the last century, and opened in 2015 as a site for “utopian monographic commissions.” It has the feel of a luxury detainment compound, or even a sprawling movie studio lot, with its broad courtyard spaces, grand outhouses, support buildings, and Rem Koolhaus-designed tower, from which one can gaze through glass and steel vitrines worth millions onto a hazy alpine-framed skyline. It’s so much less convincing in all its brazen splendor than any on-set scenic backdrop and in such synchronicity with the work you’re about to tumble into that one is forced to ask – is any of this real?

Installation “Neighbour Dub” (2019) opens the exhibition. Stanchions string a pathway through an iron cage filled with overhead speakers chirping platitudes like “when you love something you gotta let it go,” before visitors are led out of the building via another iron tunnel. Now we’re in a cavernous room that contains a ghostly barn with a turret crown. The specter here is American fascism, channeled via constrictive spaces which deliberately recall the funhouse horror of Trump’s migrant crisis fever dream. Cages for children are found in fairytales, amusement parks, and at the border. And while a cultural institution caging paying visitors doesn’t ring with quite the same irony as American administrations detaining refugees fleeing the poverty, violence, and unrest they helped create, the point does hit home. After all, the artists are consciously using culture as a weapon in the same way as a president who cribs his speeches from Batman movies. Walking through the work means walking into a maze, a self-contained narrative system in which the next plot point is how you choose to react: trick or treat, fright or flight, left or right?

After being forced to choose, one might notice the uneven floor inside the barn. We’re on shaky ground. The barn itself has been turned inside out too: external sheet-metal and a skeletal timber frame are unpainted, while inside the structure one finds bright, hard siding. Around the bend (regardless of which direction you take) is a room full of porch-style rockers facing a projection. If we’re going with the classic horror allegory of the haunted house as a character being psychosexually violated by human activity – from Psycho (1960) to Hereditary (2018), filmmakers love a basement subconscious with skeletons in all its closets – well, here is the soul of the work.

Feature-length film Plot Front (2019) is the result of over two years’ shooting in and around a property – described by Fitch as “the container” for the project – in Athens, Ohio, the state in which both artists grew up. “We decided to move to Ohio before the election, so we didn’t anticipate the political side of it [in the work],” Fitch told me. “It’s always something that Ryan and I talk about but it’s not something that has been at the forefront of any of the work that we’ve made.”

Drawing out the tensions in the state of contemporary (American) identity is familiar terrain for Fitch and Trecartin, whose Adderall-addled satire has always moved fast and broken assumptions about technology, consumerism, community, and ideology. But the scope does seem broader and somehow both more and less absurd in Whether Line, which only serves to illustrate how bizarre and unstable the corresponding territory has become. “Do you have receipts for your sisters?” one character asks. “No they’re just humans,” another responds, before concluding that a birth certificate is really a receipt for a person.

The duo’s trademark of enjoyably juvenile, ditzy pith nonsense – “I’ll terraform your butthole!” – and outright gags – “My stylist just got my results and I am two percent Amish so fuck you” – remains. But there’s something more profound going on here too. Maybe it’s growth, maybe it’s a comedown, but a sense of mourning in lines like “We’re just living, breathing bundles of meaningful shit, and we have no choice but to go shopping!” compounds the unmistakable flavor of American Gothic. Or, as one character puts it: “Language is magic and it is spellbinding and we are living in a prison that we invented. Maybe not!” The work is haunted. It’s haunted by American exceptionalism, and the similitude of life that passes for culture and identity politics. It’s haunted by the trauma of imperialism turned inwards, by colonial violence and shame. The lazy rivers run with blood. Characters lurk in graveyards and woods and zombie structures without windows, ceilings, walls.

On this note Fitch is hesitant to say too much. “There’s just a certain spookiness about the countryside,” she says, “and a certain amount of access you have to spaces that are much more taboo. Like graveyards, they’re everywhere. On the road that we live on you can just go to really small family plots and no one is there. There just is … the country kinda spooky. You know?”

And here’s where the map starts to fold. One of the film’s protagonists is “Neighborgirl,” an avatar played by Trecartin, somewhere between a dark-sided Dorothy and the kind of amiable backwater Hero’s Journey hoe built for empathy in reality TV narratives. She’s styled in thrift-store Amish bonnetcore, with a dash of Gen Z shooter drill disturbia, occasionally carrying a “DO NOT BLOCK” road sign inside a transparent backpack like the ones prescribed for children after the Parkland massacre. She’s emotionlessly excited to go to open-carry day because I guess that’s her civic duty in this upside-down land of the brave and home of the free. But in a scene shot in a graveyard at night, Neighborgirl confesses that “it’s hard coming back to life.” She’s trying to remember what her gravestone says and asks for a moment of silence to do so. She points to the blank stone: “I don’t know if I’ll ever live up to that,” she says. “I mean, it’s speechless. Nothing to say. Fucking awesome.” She must be as exhausted by the online screaming rooms as the rest of us.

Beyond the supernatural, the super natural. The sublime. From Trecartin and Fitch’s perspective there is nothing left to see: after watching Plot Front one can travel up flights of stairs to gaze out from the belvedere like a prison guard or the totemic wanderer above his imagined sea of fog to a vista of walls. And yet it is the skies which do ultimately lance Fitch and Trecartin’s haunted map. Just as in Borges’ map they are constrained, but just as in Borges’ story they carry an occluded but potent solution: weather. In the four-channel work “Property Bath” (2019) a crow skims the air above snow-laced fields, and an orange tufty bird hops from a rear-view mirror lit by watery sunlight. Gone is any hand-held shake. Here the camera rests or travels gently across pastoral scenes: trees move gently in a breeze, crops and grasses burn gold or white with snow. We’re reminded that the weather bears no borders and no bounds. Only change.

If there is any respite to the darkness and speed of human civilization then it is this. Weather the whethers. In Borges’ story, the cartographers and their diabolical map are simply abandoned by succeeding generations who see “that that vast Map was Useless” and cruel. They deliver it to the “Inclemencies of Sun and Winters.” Keep an eye on those anarcho-primitivist memes. Watch the climate. Rot the map.