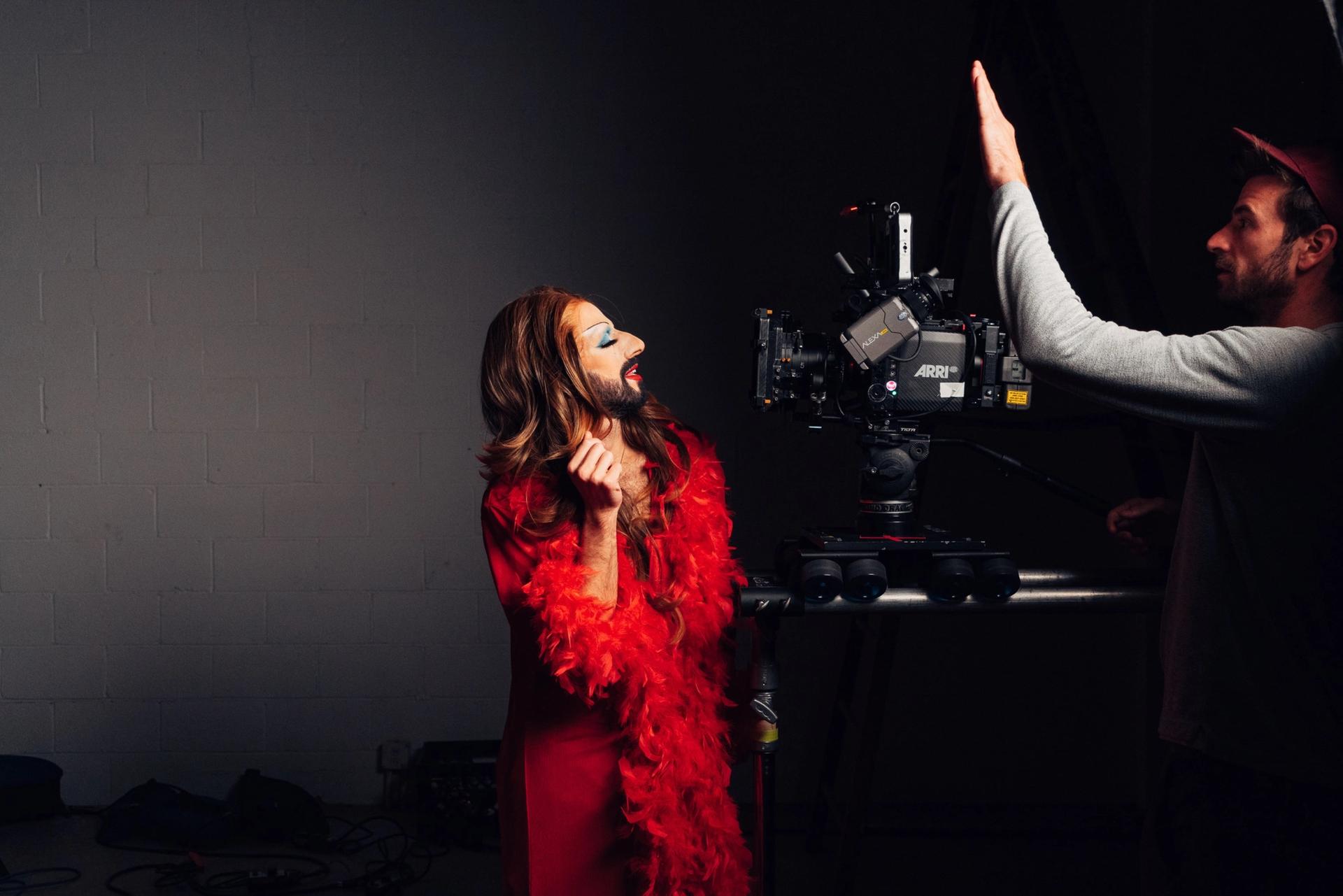 ENTER THE BODEGA, GRAB A PEPSI, TAKE THE STAGE. The latest mini-film by multidisciplinary creative enterprise SSION (led by filmmaker, musician, and performer Cody Critcheloe) takes a postmodern tour through the depths of the creative psyche. The sixth track from SSION’s 2018 album O, “Inherit” unspools like the glittery counterpart to Alejandro G. Iñárritu’s Birdman – or as he prefers, “the gay pop Black Swan” – a world where mentors are as lost as their mentees, everyone’s a critic, and the fever dream of fame and validation remains illusive in the dressing rooms, hotels, and corridors backstage. Directed by Critcheloe in DIY style over five days in Kansas City, the video walks the thin line between rock ‘n’ roll and sequinned camp as its cast spirals through the surreal highs and lows of showbiz.

Philip Maughan: Did you have any cinematic influences in mind while making “Inherit”?

SSION: I guess I was kind of going back and forth between Almodóvar and Cassavetes – not really in a narrative way, but some of the themes, characters, and costuming inspired me. There’s also an obvious nod to Bob Fosse’s All That Jazz, which is one of my favorite movies. I’m not really interested in music videos right now, and I have less interest in selling a one-dimensional concept of a star in a conventional way – where everything is sacrificed to make someone look hot. I’m just checked out of that mindset. It’s too flat and there’s nowhere to go unless you can fuck with it.

Where was “Inherit” filmed? Can you tell us a little about the locations?

We shot the entire video over 5 days in Kansas City. I lived there for 10 years, so it still feels somewhat like home to me. I really love it there and feel a deep connection to it and the community it can foster. It allows for a freedom you can’t really achieve in a place like LA or NYC, because there isn’t the same kind of industry imbedded demanding insane amounts of money to just survive and create. It gives me the space, and the mindset, to play, be ambitious, and separate myself from the bullshit. We shot a lot of the video after hours at a theatre attached to a community college, and everything else around the KC metro area during the day. This made for really insane 18+ hour days, but I enjoyed it. The loss of sleep makes the entire experience feel like a psychedelic trip, or a summer camp. Sometimes it’s more brutal than others, but something about this video in particular was really magical and sweet. The camaraderie went deep with this one and I can feel it when I watch the video.

There seems to be a semi-ironic clash between showbizzy forms of self expression and reality. There are masks, wigs, prosthetics, but also unmasking, revelation, romance; there are fleeting affairs, but also family dramas; there are new forms of creativity, but also ladies in suits and strict mentors. Does any of this make sense?

What drew you to the Oasis logo? Was it a pointed decision to give this icon of macho boy rock a more glam afterlife?

The album was my alternative rock teen dream so I wanted the logo for this era to provide a throwback to that time. I was never a huge Oasis fan when they were super popular, but I always loved their logo and it did seem like a good idea to femme up their big-ball branding with some swish.

Is it more or less taxing to direct your own music video, as opposed to someone else’s?

It’s just a different kind of taxing. I care more about my own videos because I have complete freedom and I get to say what I need to say. When I’m making a video for someone else it’s ultimately their thing so you have to honor their brand, identity, whatever. I’ve enjoyed making videos for most of the people I’ve worked with because there was mutual respect, and for the most part they sought me out to do my thing under their umbrella. But nothing feels as good as making something for myself and I believe in the long run that’s what’s really gonna matter.

Shannon michalski and I watching playback with cinematographer Jeff Tomcho. I picked up my Margiela look at Barneys in NYC the day before I left for Kansas City in a total panic that I didn’t have a “proper” look. Barneys, like Walmart, has a really great returns policy. All backstage photography by Barrett Emke.

Filming Fernando Cerezo and Christine Colby-Jacques (a former fosse dancer who now lives in KC) having a chat. I think she was convincing Fernando to become a dancer only because he looks like he should be one. I can’t remember if things got sexual between them? I’ll just assume the best.

Shannon and me while shooting the wedding scene. I’m wearing a Moschino suit that Jeremy Scott (KC pride bro!) let me borrow for a fashion show earlier this year. I wonder if I need to give it back? I hope not.

Also this wig is so major, right? Shout out to Lucas Wilson who let me borrow her. I was truly bummed to give it back. I hope whatever bitch ends up wearing it for some fashion shoot enjoys it and knows that it’s got mojo. Also shout out to Charlie Le Mindu for providing Shannon’s wig.

Shooting the wedding scene with our fab production crew, method media (based out of KC). They’ve worked on all our videos from this era. Love them.

Niko Karamyan, one of my favorite people to work with, is the definition of zen. He was in my video for “Comeback” and since this video is somewhat of a sequel I had to bring him back into the fold. I don’t think we really look alike but we are both very watery so we have the ability to flow into each other and fool most people who watch the videos.

Martine Gutierrez got this dress off Amazon a few months before the shoot. I sent her the video for Guns N’ Roses’ “November Rain” and asked her to find a dress like Stephanie Seymour’s – a rocker-whore vibe.

I think Martine and I kind of look like Sonny and Cher but way more rich and successful.

Me on stage, spotlit . . . the gay pop version of Black Swan, don’t you think?

Fernando, the muse. I think I first saw him on Instagram, then he came to a SSION show because he’s friends with Martine and she was performing with me. I actually remember seeing him in the audience and thinking he had a great nose. I think that was the first thing I told martine – that he had a face meant to be drawn. It feels classic, from another era, and slightly cartoonish. He’s so beautiful . . . it’s crazy, right? Anyway, Fernando, like most of the cast, never really needs to be styled.

Shannon, one of my besties from my KC art school days. We’ve been working together off and on for almost 17 years. The hardest part about working with Shannon is how much we make each other laugh and her extremely violent mood swings.

Me drawing Fernando. Right before I left NYC for KC I saw that Antonio Lopez documentary and decided I wanted to incorporate the OG vibe of artist and muse – like Dalí or Cocteau, the obsession manifests as drawing someone over and over again. It’s romantic and sick.

The drawing you see in the video was actually drawn on set while we were filming. I’m just that good!

This is my main partner in crime, producer Megan Mantia. She and I started working together in 2006 and she is hands down one of my most important collaborators.

A Mina-inspired moment with a prosthetic of Fernando’s nose. This feathered robe is great but the real stars here are the white tube sock and Reeboks which take this look right over the damn rainbow!

Jeff getting the lighting just right. I mean, it’s always about the lighting! If someone tells you differently cut them out of your life immediately.

Spraying that shit down. All of it! Shout out to the on-set hairstylist Taylor Rivera.

I can’t believe this was happening behind my back.

Jeff and I on the verge of intimacy.

Shout out to robyn! This DV camera is actually hers and I have yet to return it. But hey, it’s being used for a really good cause! (PS. I shot a music video for her this summer in Ibiza and it’s gonna come out “soon”) Pleas email robyn@robyn.com and tell her you think I should keep this camera.

I wonder what Fernando is thinking in this photo? Madonna’s “erotica” (confessions tour remix) plays in the background.

Martine getting yet another touch-up. I have a feeling she’s getting a touch-up while reading this. Hannah Joffray is the incredible make-up artist who made everyone look so fab.

I regret not eating this burger.

(Right after a hot make-out session) I was happy to capture this moment of unhinged glory between two gorgeous gals seeking oblivion while destroying the patriarchy. “See y’all, I told you! It’s really hot!”

Margiela suit with a shirt I picked up in KC at an antique store while in pre-production on a mad search for a vintage Pepsi can. The blue snakeskin boots are the only shoes I like to perform in. They are so uncomfortable I can barely walk but they are magic on stage . . . I think I got them in 2012 and they are still working hard, paying the bills.

Getting the old man prosthetics touched up by my fave FX make-up artist Samantha Bernstein, who I’ve been working with since 2010.

Shannon side-stage with stylist assistant Taylor Rivera. Abby Sumner Francis, the costume designer, brought this vintage Christian Dior suit from LA, cuz I couldn’t find the right vibe in KC. I wanted Shannon’s character to be a mix of Gena Rowlands and Marisa Paredes from Almodóvar’s High Heels. She’s not wearing them in this pic, but my fave part of this look was her magenta heels, which clashed nicely with the red suit.

Me with Fernando’s nose in profile shot. Shout out to Izzi Galindo for making the prosthetic nose.

The jazz band silhouettes were made of cardboard to save time and money. Fascinating Hollywood shit right here!

A moment of calm before the shit-storm.

Looking at Instagram or sending an invoice – you decide.

I think we enjoyed kissing way too much because after this shot it just casually continued throughout the day.

Fernando and I wearing SSION tour merch: OG-style ringer shirts with appropriated Oasis logo for all you wonderwalls out there who like to get freaky and eat ass!

I’ll never forget watching playback of the two of us running and being shocked by how gay we looked. We tried to run less gay but it was actually impossible. Oh well.