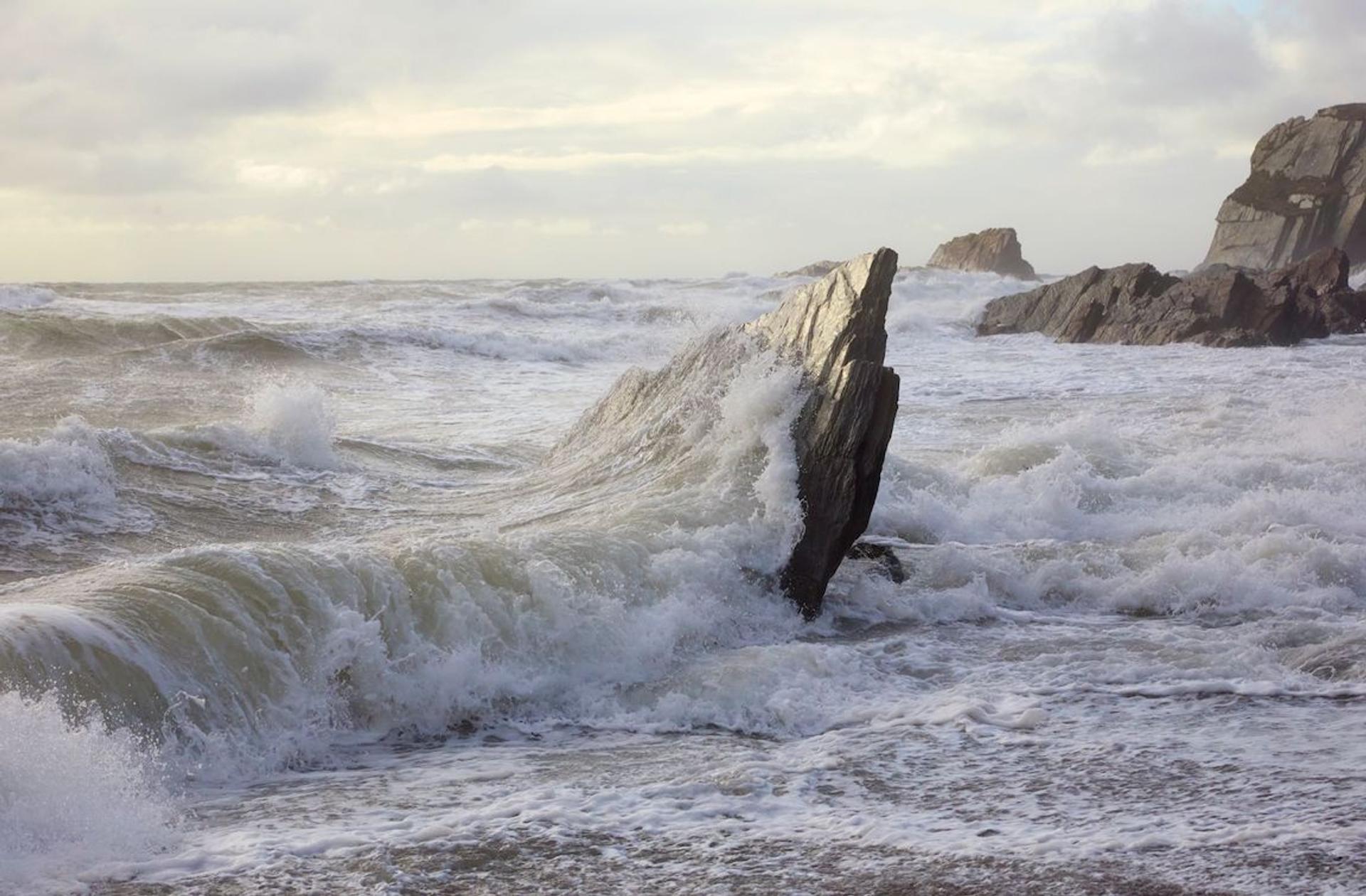 Readers of 032c may associate the work of Thomas Lohr with futuristic fashion editorials exploring the interaction between technology, sensuality, and the human form. Between the high profile shoots, however, the London-based Lohr has been making weekly trips to the shores of Devon, ritualistically documenting an ocean rock at Aymer Cove.

A year’s worth of pilgrimages – Lohr estimates that he spent 200 hours shooting the natural landmark – have resulted in a new photo book, Gezeiten, launching today in Paris at Galerie Antonine Catzeflis. Designed by BUERO, the publication pairs Lohr’s geological portraiture with words by another 032c contributor, Adriano Sack, whose introduction suggests the rock connects to the cultural symbolism of the great white shark, the sinking Titanic, Caspar David Friedrich’s Wrack im Eismeer, and Stanley Kubrick’s black monolith from 2001, among other references.

“My first idea started with animism, the belief that everything has a soul,” explains Lohr. “I tried to capture the rock by taking its portrait – I wanted to find out if it was possible to build a connection with it, and if that would be obvious for people when looking at the series.” The images reinforce Lohr’s observation that the rock functions as a means of measuring time: “I realized that it looks and functions like a sundial. A constant in time, it sits right where the tide comes in, so every day it’s twice dry and twice nearly covered with water, depending on the tide height.” Hence the project’s name, which means “tide” in German, but also includes the word “Zeit” – German for time.

Below, an excerpt from Sack’s interview with Lohr for the project.

Adriano Sack: How did you discover the rock?

Thomas Lohr: A few years ago, on the way to the Devon, a friend named Paula told me about a strange rock she had discovered; there was something special about it, she said. I don’t know if I noticed anything extraordinary about the rock the first time I saw it, but we photographed it that day. About a year later, I was looking at the photograph again (it is the first photo of this book), and felt like I had to get to know the rock better.

What were you looking for?

A place where I could be alone and readjust my thoughts. I travel a lot, and I’m constantly surrounded by people, so I never really have the time to sit alone and contemplate. I ended up sitting in front of the rock for nearly 200 hours over the course of that year. It turned out to be a very important experience in my life.

What is the coastline, and the surrounding landscape like?

The coast is made up of high cliffs, empty beaches, and rocky coves. The cliffs are covered with grass and bush, and excluding the herds of grazing sheep and cows, they’re mostly uninhabited. Moving inland, you’re surrounded by farmland and pasture. The country roads are narrow and flanked by hedgerows. Picture book England, you could say.

How did the project begin?

Just by going out one weekend to see the rock again and explore its surroundings. By the time I’d returned to London, I already had ten images that seemed interesting. Something about the experience made me want to return immediately. After that, I went to see the rock almost every month for the next year. Each time I made the trip, I felt less and less like I was photographing a seascape or an object, and more and more like I was shooting a portrait of the rock revealing different aspects of its face, of its character and personality. Its mood seemed to change along with the light, the weather, the seasons. Maybe it changed in response to my own mood. There’s an ancient belief called animism, which attributes a soul or vital essence to everything from animals to trees, clouds, rivers, and also rocks. I don’t know if this rock has a soul; but I’m no longer certain that it doesn’t.

Why do you think you kept coming back?

In a way, coming to see the rock became my own private form of worship. I decided to go on my own because I had the feeling that any company would disrupt the connection between the two of us. I was also fascinated by the relationship between the tides and the rock. The tides have been coming and going for hundreds of thousands of years, the world has changed, but the rock itself has been the same for a very long time. It might have been in that same place when the Romans conquered the island; it was there much later when pirates lured passing ships into the cliffs with lights; it was there when the Germans crossed the channel to bomb London. But maybe it won’t be there much longer. Future generations may not be able to sit in front of it anymore if sea levels rise. The rock may soon be hidden underwater.

Do you see yourself in the tradition of German Romanticism with this project?

The project definitely has a Romantic strain, even though the way I approached the photography owes more to the rigor of Bernd and Hilla Becher.

Could you describe the rock a little bit?

It’s about two meters high, five meters long, and about a meter wide at its base. It’s part of a rockbed that you can only see when the waves have washed the sand away. When that’s not visible, it looks like it might fall over at any moment. The cliffs behind it are a grey, silverish slate some parts even golden or purple. When the rock is wet and reflects the setting sun, it could almost be alive.

My first association is a white shark soaring out of the ocean – a monumental, beautiful threat. What do you see?

I saw the fin of a big white shark swimming underneath the sand. After watching the sun set in different places, from different angles, the rock started to seem like a massive sundial casting its long shadow over the beach. It was like a fixed axis as if the sun, the waves, and the rest of the world was circling around it.

Did you give it a name?

Many friends asked me if the rock had a name, but when I asked the locals who were hiking or walking their dogs around the area, they were puzzled by my question: there are thousands of rocks, why would this one get a name? Somehow I felt they were right, so I decided to keep it that way.

What did you tell hikers passing by?

The second time I went was in January, 2017. It was cold, stormy, and wet. The waves were high, and because of the strong wind, the rain was coming down sideways. I hadn’t seen anyone at the beach for two days, and I was already completely soaked, so before I left I decided to wade into the water, fully dressed, to get closer to the rock. After twenty minutes in the sea, I’d had enough, and hiked the fifteen minutes back to the car. When I arrived, I was greeted by two police cars. A local man had called them, trying to stop some crazy person in the water from attempting suicide. Once I’d explained the project to them, they really thought I was crazy and wanted to take me to the station. The next time I came, I decided to wear waders so that I’d look more professional and less suicidal. The waves were high again, but I felt good in the water. I must’ve underestimated their strength, because a wave threw me against a rock. I was pulled completely underwater, managing only to keep the camera above the surface. When I came back out of the water, a local dog walker looked at me confused, but also a bit amused. I wonder if he was the one who’d called the police on me.

How did you spend all those hours in front of the rock?

I had breakfast, lunch, and dinner there. I went swimming and hiking. I didn’t stay the night because it’s forbidden to camp on the beach, but I often slept in the afternoon. One time I met a survival group that had permission to camp by the rock for three days. They were only permitted to eat grass and snails, and seemed to envy me for the sandwiches I’d brought along. Some of my friends asked if I had sex with the rock. Of course I didn’t. I am in a relationship.

How did you know when the project was completed?

I wanted to spend exactly a year with the rock – and that’s what I did.

Why HANS FEURER Is Still the Master of Outdoor Fashion Photography

RAVE: Before Streetwear There Was Clubwear