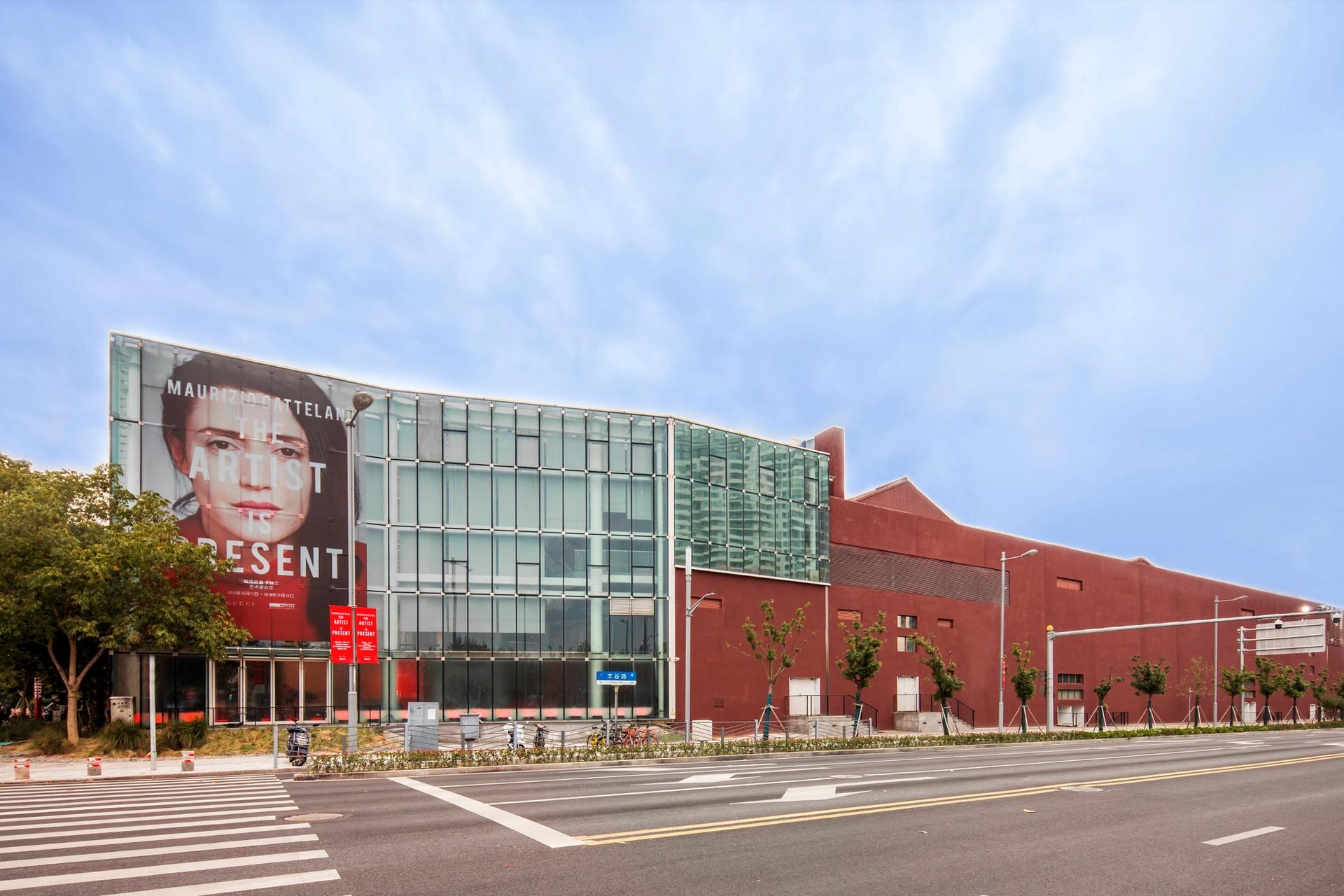 Curated by MAURIZIO CATTELAN at the behest of Gucci creative director ALESSANDRO MICHELE, “The Artist is Present,” currently on view at the Yuz Museum in Shanghai, takes its name from Marina Abramović’s famous endurance performance at MoMA back in 2012. Cryptic promotions for the show that appeared on Gucci “art walls” in Hong Kong, New York, London, and Milan this summer featured the face of an Abramović lookalike, staring down the viewer, revealing little about the exhibition other than that its central theme would be appropriation.

The intervention in Shanghai is far from a direct copy, however, and Cattelan doesn’t sit face-to-face with museum visitors at the Yuz. Instead, he assembled works from more than 30 artists that, like Cattelan’s own oeuvre, question notions of reproduction and authenticity – themes also addressed in The New Work Times, a satirical “newspaper” distributed to museum visitors from a New York Times dispenser, replete with (fake) stories about clones and counterfeits. The exhibition’s sponsorship from a major fashion house, and its staging in China, seems perplexing at first, but there is a distinct logic to the collaboration and its execution. Michele, too, has confronted themes of copying, reinterpretation and originality during his tenure at Gucci – inaugurated in 2015 after CEO Marco Bizzarri visited the former handbag-designer’s personal museum of curiosities – bringing bootleg culture onto its runways and into its collections.

Cattelan spoke to 032c about the cultural context and genesis of “The Artist is Present,” which remains open until December 16.

What are the questions that you’re seeking to answer with “The Artist Is Present”? Why are they relevant now?

You know that saying, “Good books make you ask questions. Bad readers want everything answered”? I really want the show to be a series of deep questions, more than I want to be one of those curators who has the presumption to provide his own personal straight answer. It could sound like a bit of an understatement, but that was our starting point. The relationship between copy and originality has always been relevant. Today, it is relevant to question the existence of originality, because it is deeply linked with the power of individualism, and we can all feel that that power is becoming more and more weak.

How were the concerns of “The Artist is Present” – originality, truth, identity – inspired by China itself: by Dafen Village, by replica cities such as Shanghai’s Holland Town and Thames Town, and of course by the country’s fashion and tech bootlegging infrastructure?

Definitely, the context was very inspiring, and I’m sure anyone looking at the exhibition and browsing the articles featured in The New Work Times can see that. There’s one work by Winnie Won Yin Wong on the cover of the newspaper that particularly fits the theme of what you’ll find in the show, and talks about Dafen and its relationship with contemporary art. I visited Dafen once, and since then I was tormented by a vision that this show made possible to realize: a replica of the Sistine Chapel on a 1:6 scale. For the first time that masterpiece is made accessible on a human scale and allows everyone to see it close up and without any limitations. If humanity’s maximum aspiration is to become God, the maximum aspiration of the copy is to become the original. The truth is that, between these walls, we can all become closer to God.

I believe irony is a fundamental ingredient of every aspect of human life, and it is also what distinguishes us from other animals. When dealing with a culture of appropriation, it is of course that twist that makes you turn a potentially litigious situation into something that enriches both works – the original, and the copy. Chinese philosophy is many enriching things, and I’m not so much in the Buddhist thought to say whether or not it’s also ironic or self-aware, but I would not be surprised to discover it is. To take yourself less seriously could definitely be a good additional commandment.

At what stage of your career did you come to fancy Marina Abramović?

I have always really loved her titles!

How does your work on authenticity and appropriation fit with the Gucci brand in 2018? Creative Director Alessandro Michele is often talked about as the singular driving force behind its recent success, and Gucci’s productions are not only widely copied, but also reference bootlegs in their presentations and work.

I’ve always thought that the moment that you start working alone is the moment you start failing. Alessandro is a great creative director because he knows how to get the best from his collaborators – and he chooses them carefully because he knows they are as important as he is. He recognized in me a good partner in crime: we had both previously worked on the concept of appropriation, copyleft, and, in a way, cloning too. It was like we were destined to cross paths sooner or later. Of course, it’s true that we’re speaking different languages, but we are both fascinated witnesses of the overcoming of originality in our contemporary society.

In your series, “What I’ve Learned About Copies,” published at Artnet, you noted three important “rules”: 1. Truth is a matter of faith. 2. Authenticity is invaluable; originality is non-existent. 3. To create something out of nothing is a god-like quality. How would the contemporary art world change if it took these rules at face value?

In the last few years, it’s undeniable that we have been experiencing the rise of a stronger concept than “copying,” and that is sharing. It is effecting art, of course, and it will more and more in the future. The interesting part is that in the act of sharing, there’s the absolution of the act of copying.

The Book of Gucci According to Alessandro Michele