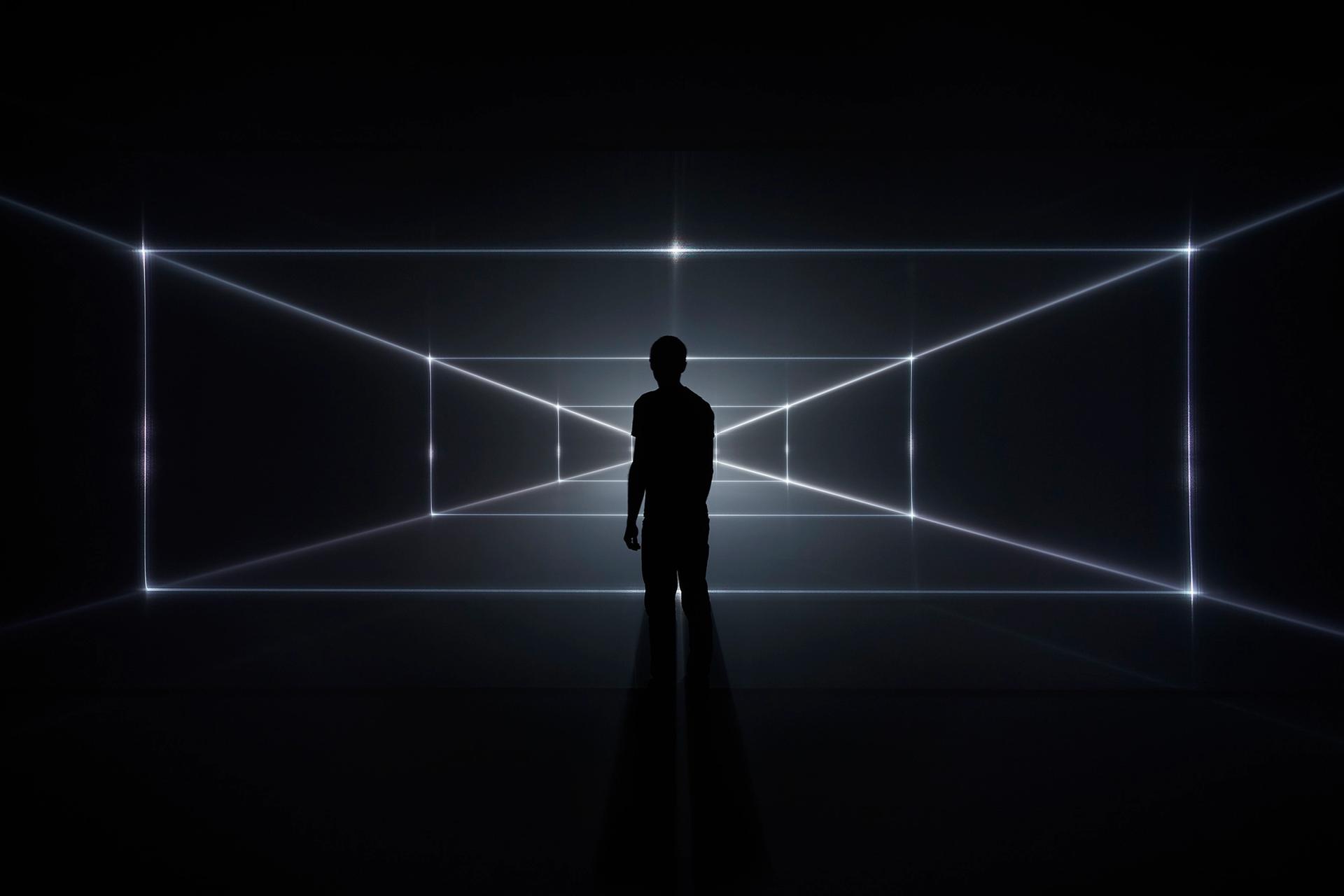 OTHER SPACES, OTHER ROOMS

In a large-scale project commissioned by the Barbican Centre in 2013, the London-based art collective United Visual Artists made an installation consisting of “12 pendulums that activate light and sound as they swing.” Titled Momentum, the series of kinetic sculptures took over the Centre’s 90m long Curve gallery, transformed for the occasion into a spatial composition rearranging linear perceptions of time and movement into something at once static and accelerated. Bold, site-specific installations, using new technologies to examine perennial questions, have defined the UVA practice since 2003, when the collective was founded by artist Matt Clark.
In the decade that followed, the group gained an authoritative voice in the field of digital art. Their approach is collaborative, both internally (the members include an architect, an engineer, a designer, a creative technologist) and externally to the practice (they have designed stage sets for Massive Attack and Jay-Z, and for several fashion shows including Christopher Bailey’s final Burberry collection). It’s through this collaborative spirit that the collective has fine-tuned an aesthetic of meditation and atemporality over futurism.
This month in London sees a solo exhibition, Other Spaces, of 15 years of UVA’s work. The exhibition dissects the rapid technological and ecological transformations of the past decade through three installations that span the fields of science, music, architecture and performance. Our Time is an atmospheric iteration of Momentum accompanied by the music of British artist Mira Calix. The Fondation Cartier-commissioned Great Animal Orchestra visually translates an animal soundscape recorded by musician Bernie Kraus into colorful spectrogram landscapes. And Vanishing Point uses light to play with the audience’s sense of perception in a hi-tech interpretation of the drawings of Albrecht Dürer and Leon Battista Alberti. Before the opening, we sat down with Clark to discuss heterotopias, using light to (literally) illuminate abstract ideas, and how digital art can draw inspiration from the Renaissance.
Other Spaces, presented by The Store x The Vinyl Factory, is at 180 The Strand from October 2nd.

Could you explain how the premise of this exhibition first came about, and how you put it together?

I had been in discussion with the Vinyl Factory for quite a long time about doing something together. When UVA hit its 15-year mark, it felt like the right moment to put together a more ambitious show than we had done anywhere previously. We went through a few iterations but eventually settled on the three works that are in the show.

The show explores some of the perpetual dilemmas human nature is confronted with, such as the passage of time, or the struggle to coexist with nature. How do the mediums you work with allow you to delve into these questions?

We use light, sound and kinetic elements to express the conceptual thinking and often we’re trying to illuminate abstract ideas, i.e. we want people to meditate on some of the things that we take for granted, reflect on the big questions in life or think about phenomena that are difficult to comprehend as a human being. As far as we know, everything that exists in the universe is in a state of flux, so we’re interested in using mediums that can reflect these considerations. The installations are transformative in the way that they redefine the spaces they occupy and hopefully create space for contemplation.

Your take on light as an architectural material is interesting. How did you first realize the artistic potential of light(ing)?

When I started out working with light, it was mainly for live performance. Most of that involved negotiating many light sources on a stage to create layered compositions and moods. For our first art commission at the V&A in 2004, Monolith, we created a sculpture that sat at the very center of the John Madjeski Garden. It consisted of a singular, very powerful light source emanating from the center of the garden. What amazed me was the power of light in its most minimal form. There’s something very primal about our attraction to light; there’s a very seductive quality to it that’s hard to explain scientifically. Then later down the line, our work Vanishing Point evolved out of a series which explored spatial intervention and how we perceive space. This coalesced into what we refer to as light architecture. Light can be a difficult medium to work with, it’s not tangible like other materials, so you have to guide it into form. And so through our work we’re considering how light manifests as form and shape, an illusion constructed from something which itself lacks physical materiality.

You mention Foucault as the inspiration behind the title of the show. Which ideas in his writings did you find relevant to your work?

I first came across Foucault when reading a book that transcribed one of his lectures on the paintings of Manet. In the introduction to the book, he describes what he calls ‘heterotopias,’ a term first published in one of his previous books, Of Other Spaces. Foucault describes a utopia being a completely fictional space, but a heterotopia is both real and illusionary, much like a mirror. It struck me that there is a resonance between the work UVA makes and this notion of a heterotopia.

How did you adapt this theoretical thinking to the creative space?

In relation to space, and the microcosms or installations that we make, there’s a sense of something that’s both real and unreal, a sort of fabricated reality where a certain behavior is almost enforced.

Did this body of work emerge organically as a continuation of your Momentum project at the Barbican?

There is one work in this show that’s an iteration of what we presented at the Barbican, but will feel quite different as it’s been considered specifically for the new space. We are collaborating with the musician Mira Calix once again, who has composed a completely new sound design. The other works aren’t linked thematically but, like Our Time, can be considered performative spaces where sound, light and movement unfold.

Tell me more about drawing inspiration from the Renaissance. Where do you think lies the contemporary relevance of artists such as Dürer or Da Vinci?

Vanishing Point is an exploration of both technique and source material. It creates the illusion of light as a physical material, slowly drawing through space where the room is divided into different architectural compositions. This is a direct reference to the techniques that were invented during the Renaissance. Technology and visual art have always gone hand in hand; it’s difficult to separate them. Da Vinci was both an inventor and art maker. I’ve always wondered what these minds would have produced if alive today.

In June, UVA created an installation for the Prada menswear show that took place in Shanghai. Our Time was also featured in Christopher Bailey’s final runway collection for Burberry in 2018. What kind of artistic potential do you see in fashion, and how do you see it weave into your general art practice?

We have collaborated on several projects in fashion, mainly designing environments for catwalk shows. These projects often sit at the intersection of architecture and performance. This space is interesting for us, as you can be quite experimental and the process can be very informative for other projects.

RUNWAY RECAP: 032c Cosmic Workshop at 180 The Strand in London