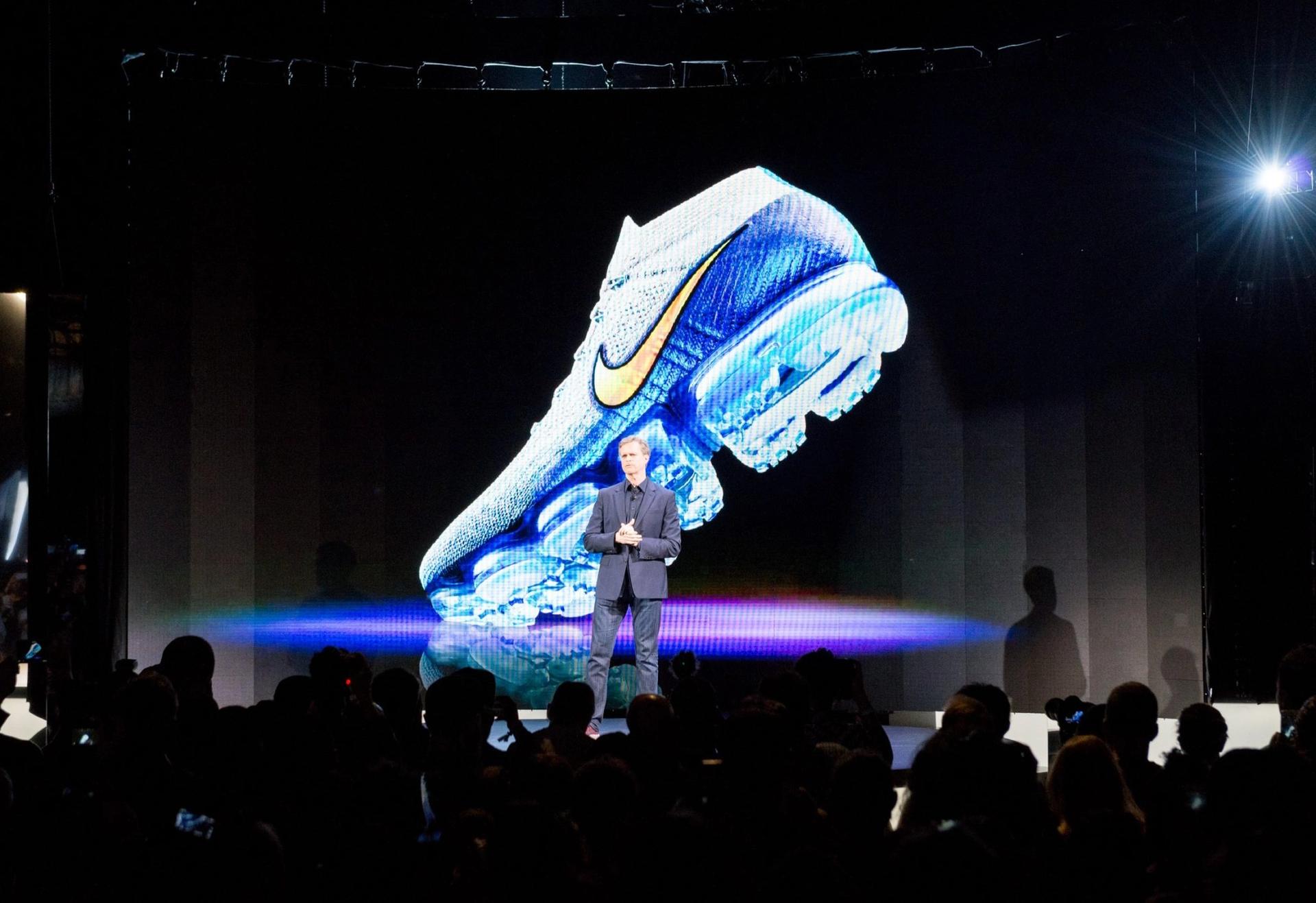 Every four years, Nike throws a World’s Fair for sport tech. With rivals old and new biting at their heels, 032c’s Gary Warnett administers a SWOT analysis to an athleisure hyperpower facing an anxious future.

Even just a quarter of the way in, it’s evident that 2016 will be a significant one for sportswear. Nike expects the swoosh to be ubiquitous at the Rio Olympics this summer, but sometimes you need to preempt an event with another event.

The big-budget Innovation Summits have set off each Olympic year with a blitz of technical product talk, and this year’s, held in New York last week, was no different.

Nike, Inc. CEO Mark Parker makes a point of announcing that, “These days we can move from a sketch to the playing field faster than ever,” hinting at a new-found nimbleness in reacting to the market. The keyword was system this time round — systems of dress that even incorporate socks with enhanced grip for a holistic approach to athletic wear.

These quadrennial showcases have given us some now-familiar tweaks on performance footwear — the Portland and Beijing announcements in 2008 brought us the squishy, ridged Lunarlon foam and Flywire support that helped ring the death knell for bulky, padded builds, while 2012 introduced the Flyknit construction, premiered with a collection made by the brand’s concept car-­like HTM division.

In New York, owning the moment was the intent. Beyond the building, Nike was dropping a series of digital announcements for top tier projects like a floral patterned NikeLab performance line with Riccardo Tisci and a new collection of HTM Air Max releases. It’s easy to get distracted inside too — a sock-height, Flyknit upgrade of the Hyperdunk is a remarkable piece of contemporary basketball design is just one of numerous products on display that’s almost lost in the blitz of brand-new creations.

Dummies display Nike's "system" approach – right down to their socks.

The HyperAdapt 1.0 behind plated glass.

The crowd at the Innovation Summit.

The Nike+ app's next rollout is introduced.

If the aim was to dazzle with the sheer breadth of innovation on offer, Nike made its point, then reiterated it with big numbers to back it up. After just four years, Flyknit is a billion dollar franchise over with 500 patents attached to it, and an initiative that has already saved over three million pounds of waste compared to conventional constructions.

Then there were the bold upgrades to 10-year old technologies: a new iteration of the Nike+ app promises a intuitive personal feed for fitness and shopping, while the Air Max got its most dramatic upgrade in a decade.

Visible Air technology, premiered on 1987’s Air Max, was key to winning the hearts and feet of consumers during Nike’s war with Reebok. While a bulging bubble had been more liable to be seen at street level rather than a track of late, the introduction of the VaporMax Flyknit brings the cushioning back to athletics with an unorthodox geometry that brings to mind an early Nike Air prototype from its early days.

Self-professed futurist, original Air Max designer and vice president for design and special projects Tinker Hatfield would prefer to look ahead, but it’s a testament to his portfolio that the past just keeps calling. He’s at peace with the idea of discussing the past, “I used to not want to talk about retro shoes, but now I understand the relative importance of why retro shoes are still working. A lot of people predicted their demise around six or seven years ago,” he says, “I don’t mind talking about these things if there’s some balance — some new stuff to accompany it.”

Wandering into the main area on day one, the stifling heat, plus an occasional cacophony of buzzwords and Dr. Dre instrumentals proved disorientating for any media representative who wasn’t a summit veteran. H2O shots were a necessity, and anyone foolhardy enough to play a drinking game with anything stronger than water every time they heard the words innovation or iconic would have blacked out.

Eccentrically dressed and refreshingly candid in conversation, Hatfield is happy to talk about Nike’s big announcement this year – the HyperAdapt 1.0 shoe, which features adaptive (or self-)lacing technology. Place your foot into the relatively conventional training-style low-cut design and it fastens around your foot with a reassuring whirr. Pressing a minus button loosens them again. It all seems like slick gimmickry until you ponder its potential — players looking for a perfect fit, the elderly and the disabled could all benefit. Visitors clambered to Snapchat a quick wear-test.

The HyperAdapt 1.0 is a curious case study of nostalgia informing the future. It’s a self-fulfilling prophecy for the feet. In the run-up to Back To The Future II’s launch in 1989, Hatfield was called on to design a prop shoe, the Nike Mag, for Michael J. Fox’s character to wear during that scene. The self-lacing hi-top took on a life of its own, with relentless requests to Nike for the shoe to be released as a real object.

The technology proved harder to recreate in the real world than its effortless-looking screen appearance. The first working demo dates back 10 years, with Senior Innovator Tiffany Beers at its helm, “We had the first one of these working in 2006 and it was still pretty rough – you had to plug into to a wall with a backpack power supply.”

Contrary to the Mag’s space boot heft, this shoe is a slicker, more contemporary model. It’s a work in progress, in that the technology’s potential remains untapped. Beers understood that this was more than just a novelty from the start, “We’re a performance-based company. The idea started with Back to the Future, but we wondered what we could do with it from a performance standpoint. I remember wearing a prototype pair of these very early on and running up this really high hill and adjusting the tightness and looseness so I could keep my pace was great. I’m no great runner or anything, but the potential is huge.”

While it’s a prototype, the final shoe, set to go on sale at the end of the year, will be roughly the same design (its price is undetermined as yet). A charge for the shoe’s underfoot battery can last two weeks and there’s talk of USB charging and accompanying Mophie-style portable chargers to avoid getting caught short. The team are already at work on 2.0, which Hatfield says will be a performance basketball shoe. Beers sees it as the perfect sport to showcase what HyperAdapt can do, “Think of a basketball player — they tighten their shoes so tight down that it’s like driving your car with the airbags out in case you get into an accident. These can loosen for time out to feel more refreshed then you step into them and just take off.”

The consumer might have evolved to embrace the seamless, cushioned minimalism of Nike’s 2012 summit, but brand-loyalty seems seems like a quaint notion that’s one smart social campaign from being overruled. While Beaverton-based Nike, Inc. reports growing revenues and a colossal lead over its rivals, competition is fiercer than in recent years at trend level.

Adidas — an official Olympic sponsor — are displaying a restored mojo via the popularity of their Boost technology, twinned with their own knitted build, a Kanye West endorsement that’s looking increasingly canny and a new knack for launching product digitally and limiting supply to create significant demand, with the brand becoming increasingly coveted with legions of Chinese consumers. Since 2012, a niche collector culture has joined the mainstream, and adidas have wasted little time in courting its participants.

The multiple performance categories are aware of encroaching armies too. Kevin Plank’s Under Armour brand is another threat. Despite being a relative newcomer at just 20 years of age, it’s expanding into Nike’s territory with a substantial space in Portland, and big-name signings like NBA phenomenon Steph Curry. With “THEY’RE STILL SLEEPING IN BEAVERTON” written on the walls of the Under Armour headquarters in three-hours-ahead Baltimore, they’re keen to capitalize on any emerging opportunities.

Speaking strictly in terms of timezones, it may well have a point. Yet this 2016 summit felt like a statement of intent from a company that doesn’t want to be caught snoozing. Yesterday’s announcement that Under Armour’s senior vice president of design Dave Dombrow is now part of the Nike team indicates that they’re very much awake.