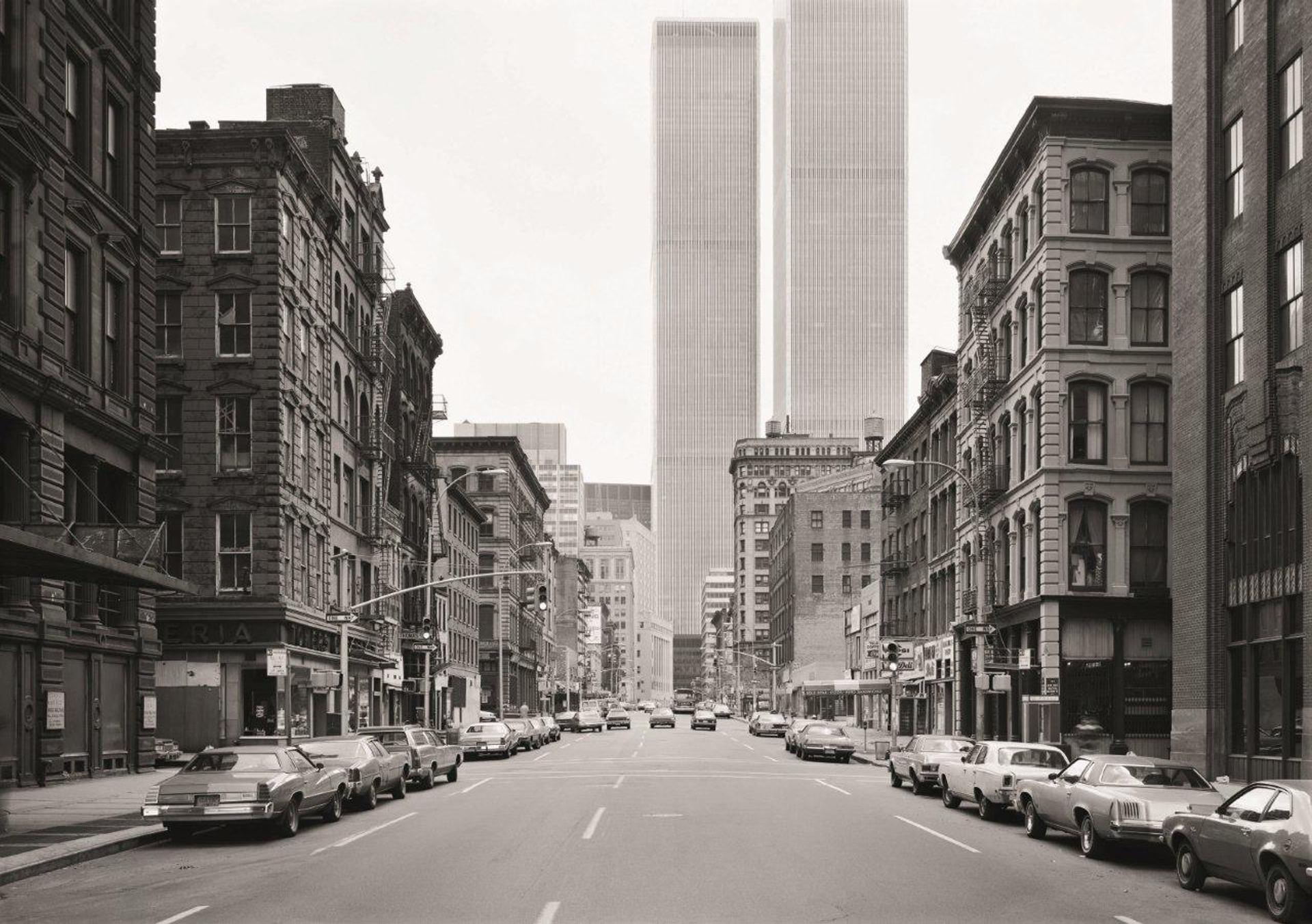 In Another City: THOMAS STRUTH

A side street in Manhattan, perhaps in the early morning; a heavy Cadillac and in the background two delivery trucks. At first glance there’s nothing more to see, no human beings, no movement, only the “One Way” signs, performing a ballet of arrows. Other than that: blank windows, rigid fire escapes, a “Park” sign – not signifying nature – only immobilized cars and more inaction. Then comes the recognition of ruin in this image: planks, soaked cardboard boxes, traces of devastation, behind all this, a huge pile of snow. Here is Manhattan after masses of snow have melted away and things begin to reemerge.

A snowstorm in Manhattan abruptly turns the city into something else. In just a few hours winds from the sea push snow into high drifts, eventually cars no longer venture onto the roads, houses look like dark rocks, the chasms of the streets like canyons – the otherwise bright glittering center of civilization is suddenly reminiscent of the wilderness of America’s nature, evoked in so many films and Hudson River School paintings.

Thomas Struth’s photo shows the moment of re-transformation, where, with the melting mountains of snow, the city gradually becomes a city again. Another photograph shows a view over Broadway and the twin towers of the World Trade Center, in a familiar everyday, almost banal, moment in 1978 – until you realize that contained within this image is a complete theory of the formation of America. Two directions are identifiable: the vertical of the twin towers and the horizontal of Broadway, that path on which the development of Manhattan occurred. Long before the Europeans, Native American had already beaten paths through the forest between Manhattan’s swamps and rocks. The main course of the so-called Wickquasgeck path crossed inland, from north to south. The Dutch built this path into a road, which they called “Breede Way,” hence, the name Broadway.

Broadway was one of the first symbolic locations for the expansion of settlers who later moved west, just as the 19th century was marked by horizontal expansion overall. It was the century of the trek west, the railway, and the conquest of the prairies. As this horizontal growth came to an end with the urbanization of Los Angeles and San Francisco, and at the same time were fictionalized in cowboy novels and movies, the American narrative sought another direction – the vertical. The 20th century was an era of massive high-rise construction, and later, the aerospace industry: high rise architects and astronauts were cowboys of the vertical. In Struth’s photos his overturning of the American narrative from horizontal to vertical is almost instantly visible: It seems as though Broadway folds itself 90 degrees into the sky.

At the same time in this image is the juxtaposition of the old houses in the foreground, whose proportions can be estimated based on the human-sized windows, and the abstract forms of the World Trade Center, whose façade does not indicate its size, establishing a further aesthetic break between the 19th and 20th centuries. The boundless towers are reminiscent of a force of nature, an optical phenomenon.

Thomas Struth, born in 1954, is one of the most famous photographers of our time. From 1973–1980 he studied at the Düsseldorf Art Academy, first painting with Gerhard Richter, and later in 1976, photography with Bernd Becher. In 1978 he won a scholarship to New York City: these images originate from that period. In his book Unconscious Places he collects the New York photographs with images he made subsequently in other cities. The images illustrate much of what shapes the lives and perceptions of a city.

Formally, the scenes represented here all show something very similar: empty streets, parked cars, the city in a disengaged moment of expectation. In a comparison of these images, you can clearly see that it is something completely different to squeeze into the velour seats of a Cadillac cruising through the brick canyons of New York or sputtering through Düsseldorf in a rattling Renault 16, past the sooty façades of a West German side street, where the filth of the Ruhr district superimposed over the soot of bomb raids has blackened its plaster exteriors. And again, it is quite different from the grime of Italy; it is distinct from the darkness of the heavy brick buildings of Manhattan. It becomes apparent that the drive through Brooklyn feels different because, above all, the things themselves – the upwards sliding windows, the rough doorknobs, the delicate, cold metal levers – feel different; because the smells, the light, the sounds are different. These images show these things in this light, how the individual details of things change perceptions.

Above all – and for this reason every architect should look at these images – the principles of form upon which the city emerges are revealed: New York as a grid, as a draft in the void; in Düsseldorf as a process in which curving lanes are paved and expanded and at some point grow into city streets. In Naples as a porous palimpsest: Someone builds a small house, someone builds a palace beside it, which at some point decays, which is why someone crafts a newspaper kiosk between the monumental columns, next to which a café settles – and so on. In Japan, a city built like a snapshot, consisting of temporary, not intended to last forever homes. Finally, the agoraphobic present day city planning in Shanghai and Mongolia, where the taming of the empty planes over a short period resulted in a hectic outreaching ideal city constructed overnight with historicist buildings, assuming a pretense of having a long-standing settlement.

In these images the city appears as both a place of remembrance and of design. All of the images share the attribute of precise compositions leading the eye to details – such as a hysterical red street lamp in São Paulo – and the strict central perspective, which one knows from Francesco di Giorgio’s ideal city or Raphael’s School of Athens. Only here there are no people to see, rather, at best, cars that sit on the roadside as representatives of their drivers; the white Beetle as an old woman’s hat on wheels, the Alfa Sprint as a dynamic men’s hairstyle out of metal, the Kadett as a metal portrait of a waistless elderly gentleman with too – small shoes – objects awaiting their entrance onto an empty stage.