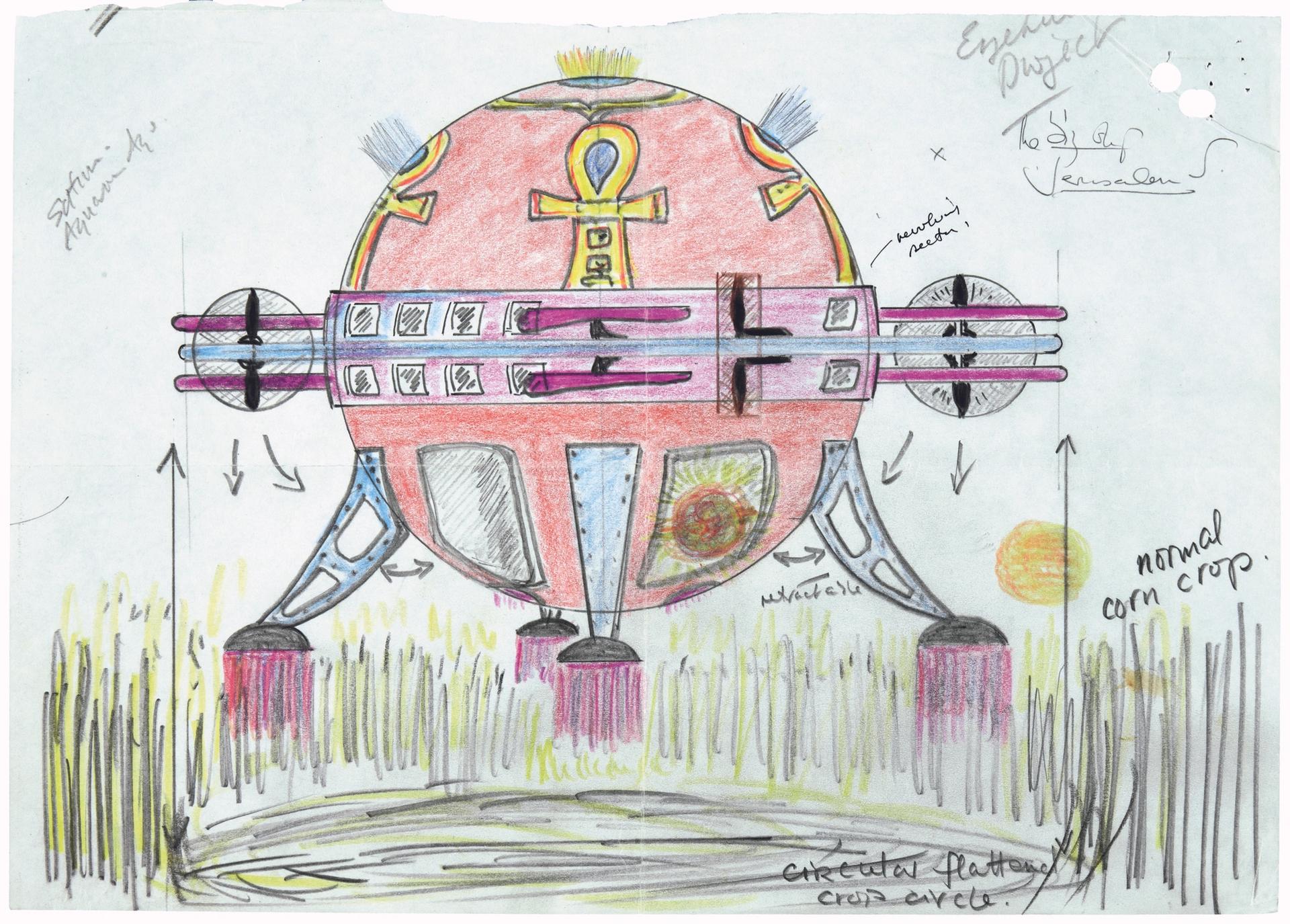 One Sunday in 1952, in the early days of the Cold War, Lieutenant John Kilburn of the Royal Air Force noticed something “paranormal” during an exercise designed to emulate a Soviet attack. As he stood with five other men on an airfield in North Yorkshire, a Gloster Meteor fighter jet came into view, followed by an unidentifiable silver object. As the lieutenant tried to make sense of what he was seeing, the object fell through the sky, “swinging in a pendular motion . . . similar to a falling sycamore leaf.”

A year later, Minister of Defence Winston Churchill asked the UK Air Ministry to set up an Unidentified Flying Object department on Whitehall: “the UFO desk.” The ministry’s aim was to collect, categorize, and, if necessary, respond to sightings. For over half a century, the British collective consciousness submitted 12,000 reports, with documentation often including hand-drawn illustrations ranging from the architectonic to the kiddish. Presented by journalism scholar David Clarke, UFO Drawings from the National Archives (Four Corners Irregulars, 2017) brings these records – testaments to “extraordinary personal experiences” – together to provide an overview of their many forms.

The Swiss psychiatrist and psychoanalyst Carl Jung published Flying Saucers: A Modern Myth of Things Seen in the Sky in 1958. The work notes the coincidental arrival of UFO sightings and the Cold War, diagnosing the phenomenon as anti-Soviet anxiety projected skyward. But a psychoanalytic reading is nothing without hysteria and penis envy, and a Freudian approach might have pegged the UFO phenomenon to an entirely different neurotic fixation: feminine sexuality. A number of the book’s illustrations consist of landscape drawings, printed with a “portrait” orientation, and the results are noticeably vulvic in form. Given the tyranny of the phallus in our built and human environments – reflected in USB drives, skyscrapers, airplanes, cigarettes – any technology of a different shape is certain to stand out. Is the UFO a manifestation of a celestial femininity, sent by the collective unconscious to oppose a pervasive fear of Soviet victory? Or is it an embodiment of Oedipal dissatisfaction, a maternal symbol desired but cruelly withheld and unattainable?

When Hollywood blockbusters demonize extraterrestrials, they very often feminize them, or at least make them hostile to masculinity – see H.R. Giger’s vision for Alien, the creature’s fertility is a threat to men that says, “I’ll get you pregnant.” Naturally, this makes aliens targets for pistols and military rockets. In the final scene of Independence Day (1996), Will Smith and Jeff Goldblum smoke cigars of Churchillian girth as they watch the “mothership” burn in the desert, Earth’s balance restored by their takedown. The authors of science fiction franchises may be working through some complexes, but off-screen, flying saucer sightings are neither met nor accompanied by violence. Perhaps this was what the Ministry of Defence was trying to prove when, in 2007, it released its files to the UK National Archives – a stated attempt to counter “the maze of rumor and frequently ill-informed speculation” on the subject, and a gesture to which we owe Clark’s illustrated social history. Apparently, the British government themselves concluded that UFOs posed no threat to public or national safety – and that the “UFO desk” and its prolific record-keeping was a massive waste of resources – and in December 2009, the Ministry of Defence closed the department, citing its apparent lack of “defence purpose.”

Governments have attempted to divest themselves of the Cold War mythologies of secret departments and off-the-grid alien research centers, but the general population seems increasingly preoccupied with the stars. If everyone lately seems to know when there’s a “supermoon” or a planet in retrograde, perhaps it’s because we’re still looking for the embodiments of anxieties and hopes that UFOs provided to Russian-fearing Britons 60 years ago. When SpaceX launched their Falcon 9 rocket in Los Angeles at the end of 2017, forming an elliptic slash in the night sky, the query – “What is that??” – posted en masse on social media seemed to silently carry its own hypothesis: “It’s a UFO.”

H.R. GIGER’s Private Life Was Just as Dark, Sexy, and Pop as His Art

Anime Architecture: How GHOST IN THE SHELL was Built