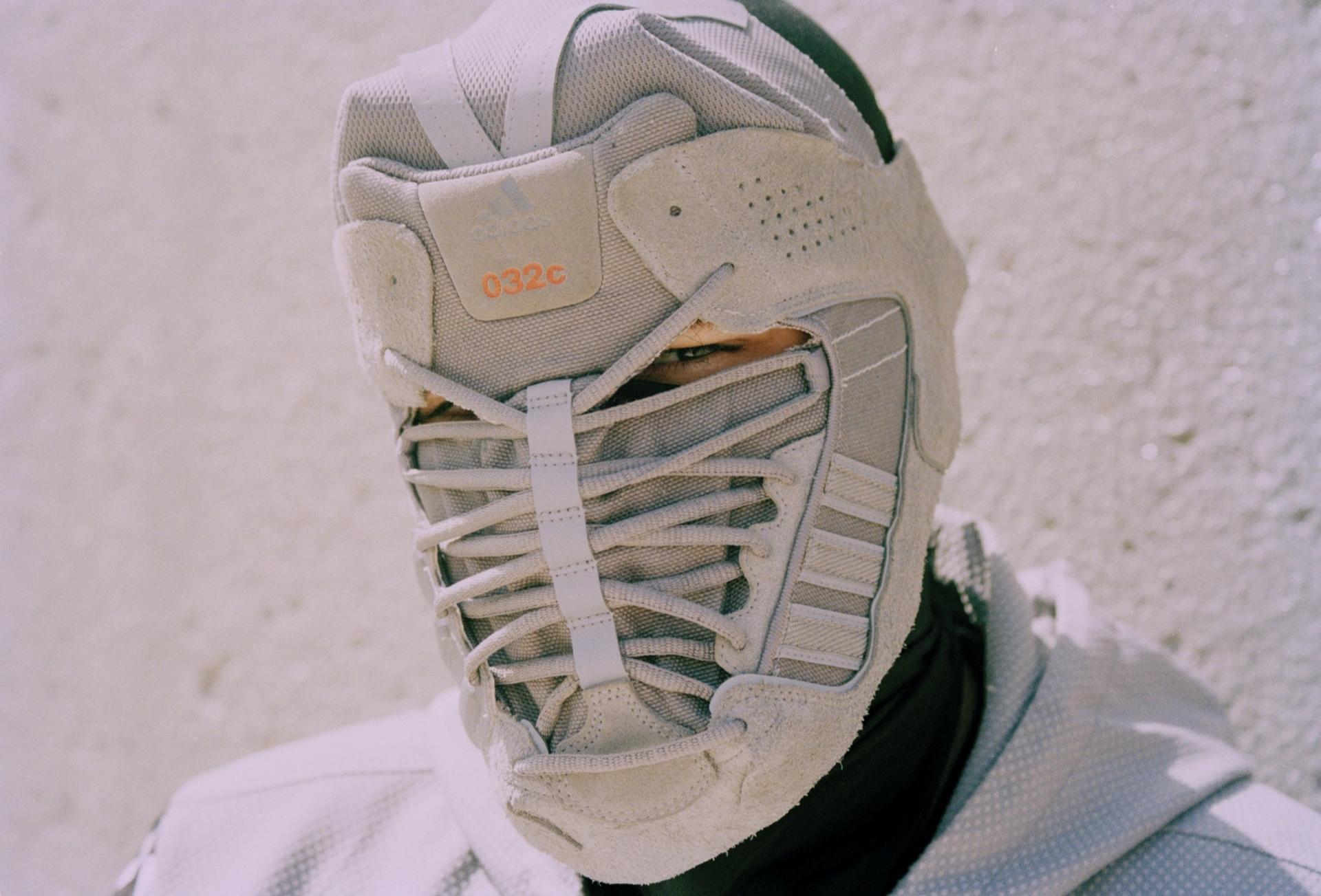 Instagram artist sneaker_mask is only the most recent guest to the fashion world’s masquerade ball: for the past few seasons, runways have been invaded by masked models. We sent the anonymous artist a pair of our adidas by 032c GSG 9 boots to reconstruct – Maria Komarova reports.

Guests of Gucci’s Fall 2019 show received an unusual invitation. In a straw-filled wooden box they found the cast of an Ancient Greek mask of Hermaphroditus, the epicene child of Hermes and Aphrodite. The mythological model – long a symbol of the androgyny and effeminacy that Allessandro Michele has tirelessly explored at Gucci – points to a symbolism beyond the mask as simple disguise. “If by authenticity we mean the possibility to stick to the idea we have of ourselves,” the brand explained in the show notes, “the mask becomes the means through which we can become what we feel we are.” Headgear with various connotations – from superheroes to fetishes – was interspersed throughout the collection.

Instagram artists have also joined the carnival, exploring themes of their own. Sneaker_mask makes masks out of, well, sneakers, then poses muscular and threatening on his anonymous page, like a streetwear Bane on his way to a fetish club. His offline persona couldn’t be more different: he loves nature, Lana del Rey, and his boyfriend; he writes books and lives by the sea. “The mask becomes the means through which we can see what other people become when they see us,” he says.

Do you wear your masks in public?

I never have the opportunity. There aren’t any events which would be acceptable to attend with a sneaker mask on your face.

But you are definitely into streetwear.

I’ve been discriminated against so many times for liking sportswear, and that should change. “If you’re clever and rich, you should be wearing a suit, not a tracksuit” – prejudices. Even my best friends have been harsh on me sometimes because of the way I dress. Maybe that kind of discrimination isn’t present in fashion circles, but in everyday life, it definitely is.

“People have sex with my masks on”

This is one kind of prejudice, but there is also another: I’m sure you are objectified a lot on Instagram.

Since I don’t pay attention to any of the feedback on my photos or my work in general, being objectified doesn’t bother me at all. It’s as if someone who I do not know were to call me to say that he will never call me again. It’s fine. The photos become a sexual thing in the mind of the observer.

Do you want to have sex with someone in one of your masks?

No. But I’ve heard that some people do have sex with my masks on. I think that my photos might awake other people’s fetishes. For me, first of all they are bizarre, then they’re provocative, and only after that do I see them as sexy.

And why do you prefer to stay anonymous?

Because this world needs more Sias and fewer Kardashians.