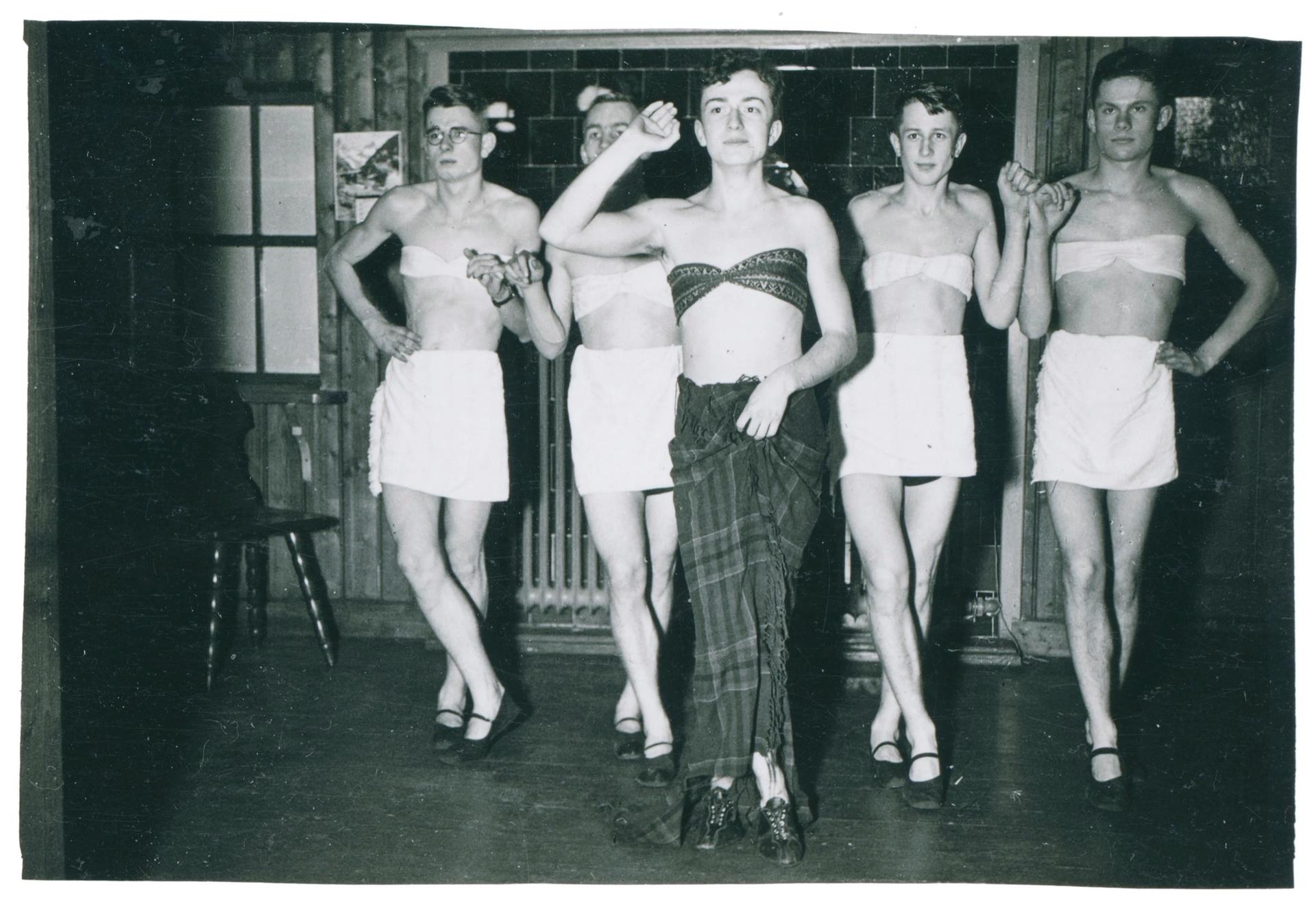 CROSS-DRESSING IN THE WEHRMACHT: Unseen Practices at the German Front

Among the more unbending, rigid institutions in the world, the armed forces would be unlikely to top anybody’s list as a destination for exhibitionism and play. The exterminating armies of the German Wehrmacht during the Second World War even less so. Yet while collecting amateur photography from periods during and after the war, Berlin-based visual artist Martin Dammann would, “from time to time,” stumble upon photographs of cross-dressing soldiers. Provoked, he began to seek out more – from dealers and collectors, at militaria fairs in Europe and the USA – drawn to the “kaleidoscope of emotional states” that they revealed: “Desire for women. Desire for men. To be a woman. To be elsewhere. To be someone else.”

Soldier Studies: Cross-Dressing in Der Wehrmacht files Dammann’s findings into four main categories: “Basic Training,” “Unit Celebrations,” “Frontline,” and “POW Camps.” What might look like horseplay and the adolescent curiosity typical of all-male environments in the early images develops into spectacular, rigorously rehearsed cabarets and variety skits, performed by trainees for their cohort in the name of Kraft durch Freude (“strength through joy”). It’s hard reality in soft drag: a tradition of carnival and festive camp with roots in Germany that run deeper than the Weimar era libertinism that the Nazi Party so despised. At the frontline, the roleplaying continues, but with growing desperation. “Improvised masquerades [take place] within the core groups of soldiers, often in direct vicinity to the front line,” Dammann observes, “everyone knows everyone else, the longing for security and a partner is at its most palpable.”

There is kissing. There is singing, dancing, exhibitionism, and play. “I try on women’s underwear,” reads the inscription on the back of one image. “If mother knew what I was up to,” reads another – in desperate avoidance, perhaps, of the military-imperial machine that sanctions killing men and women, but punishes loving or dressing up like them. “Soldiers do everything that other people do,” argues sociologist Harald Welzer in the book’s closing essay. “But they live under particular conditions … their day-to-day lives become more hermetic.” It is grim to contemplate the idea that the seal that creates the necessary permission to engage in the depicted behaviors – harmless, comforting, human – is simultaneously a tool in their suppression in the world, the soldiers performing them the weaponized end of a worldview in which non-conformity meant death.

In one improbable tableaux, two couples embrace one another at a barroom table, resting their bonnet-clad heads on their partners’ shoulders, as three other soldiers peer into the camera with a range of expressions, from sober bemusement to casual bliss. The heraldry of the Third Reich hangs on the wall behind them. Someone, maybe one of the subjects, maybe the photographer, has scrawled on the document: “It is so beautiful to be a soldier.” A lesson from history, repeatedly forgotten, is that there is a gulf that separates ideology and dogma from actual human behavior. Examining the superstructure – in this case, National Socialism – teaches us about its laws, image, and the popular sentiment that enables it, but tells us nothing of the secret corners, private unions, and insular moments where deviations from the code were commonplace. Welzer offers an illustration in which a bitter argument between two German POWs in Allied captivity after the war – one a convinced anti-Nazi and the other an unshakeable supporter of the regime – nonetheless leads to mutually consensual sexual intercourse. “Like everyone else in a modern, functionally-differentiated society,” he suggests, “Wehrmacht soldiers also knew when and how to switch roles.”

GRIN AND BEAR IT: Leisure and Terror Vacation in the Weimar Republic

9 months ago
No results for ""