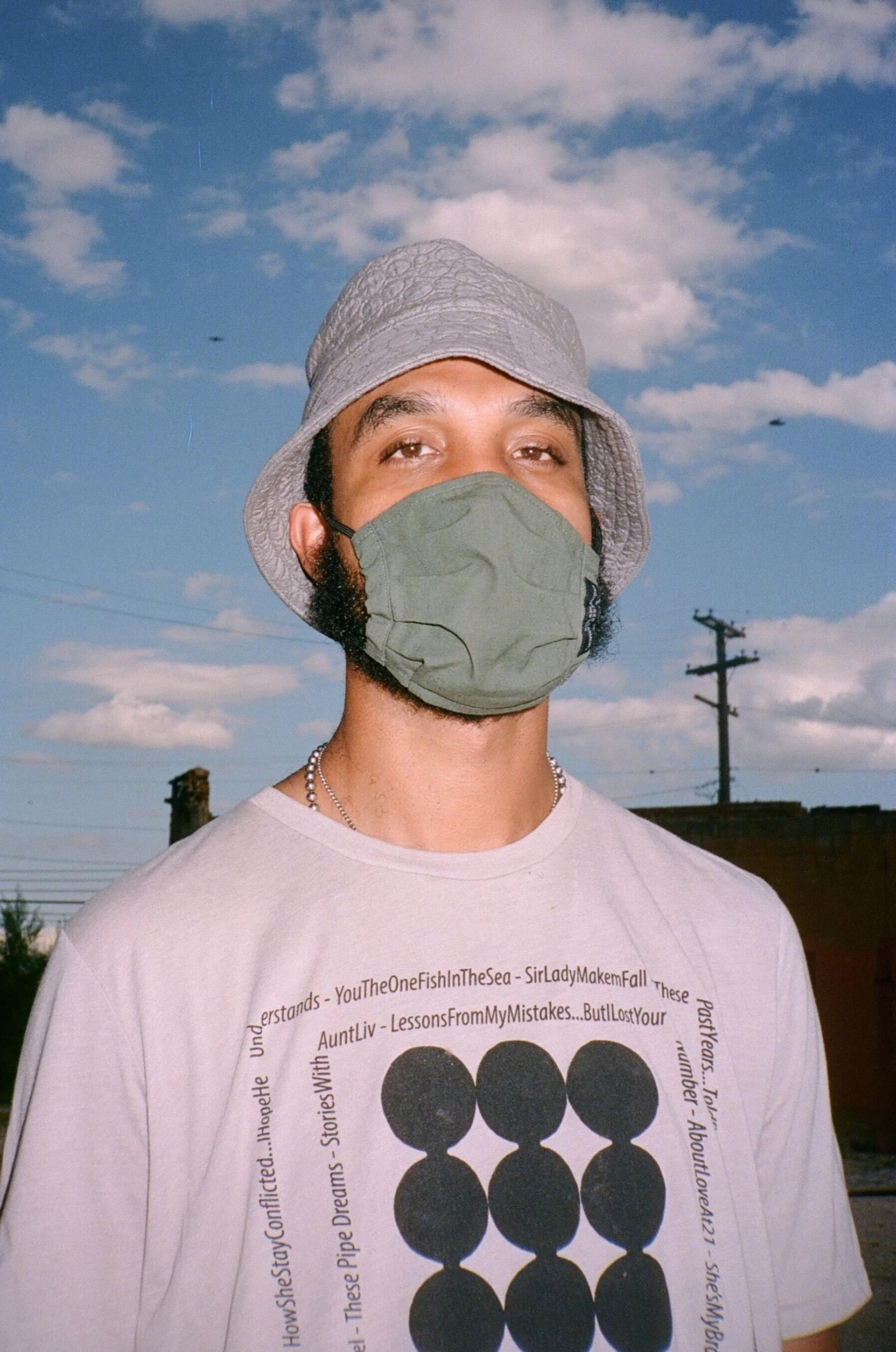 BLACK NOI$E: Anything But Static

“BLACK NOI$E PRESENTS THE APTLY TITLED OBLIVION TO A RESTLESS PEOPLE,” reads the press release from Earl Sweatshirt’s Tan Cressida Records. A testament to Black Noi$e’s versatility as a producer, Oblivion was recorded under lockdown. The 24-minute project is a contemplation of the solitude and anxiety of the contemporary moment – but Black Noi$e’s latest release is anything but static. Hosting features from MIKE, Bbymutha, Liv.e, duendita, and others, on eleven of its thirteen tracks, the album builds from the frayed ambient hum of its intro, “14 Trillion,” and moves through layers of pitched down samples, stuttering drumlines, and meandering keyboard melodies before erupting into pixelated electro scales on Track 6, “George’s Baby.”

In addition to having produced Earl Sweatshirt’s songs “Ghost” and “The Mint” (both featuring Navy Blue), the Detroit-based producer is also Sweatshirt’s touring DJ and close friend. Having played in punk bands and experimented with house and techno production throughout his career, I ask Black Noi$e how Detroit’s musical legacy shaped his interests:

Black Noi$e: You get introduced to a lot of music there. My whole relationship to it was basically through radio surfing. You could hear techno and house on the radio, and you would hear a lot of Southern rap, too. You had the whole West Coast, East Coast thing – Detroit is in the middle, so we heard both sides. It wasn’t like they was just playing West Coast music or East Coast music. The radio had everything.

Octavia Bürgel: Listening to this album, Oblivion, feels like watching a cypher. The tracks are relatively brief, which makes it feel like you’re just getting a little taste of each of the featured artists. Can you tell me a little bit about your process making it?

When you hear things, they either work together or they don’t. I wasn’t making a conscious decision like, “we’re going to branch out and do a bunch of different things.” It’s just how I view music in general, and how I create: I never limit what I make to one specific thing. I just like experimenting, really. The stuff that I think is normal, other people are like, “damn, this is kinda weird.” Since I was an only child, there was no one there to be like, “yo, turn that shit off.” Or to put me on to other stuff. It was just me, so I had to build my own taste. That’s where a lot of it comes from. I don’t want to be one of them people that’s like, “oh, this is breakthrough, genre-bending” type shit.

The beat on “Mutha Magick,” the Bbymutha feature, is so well suited to her flow, and I felt like I got such a sense of her energy from just a one-and-a-half minute song. Were you tailoring your beats to the artists you had in mind, was it a collaborative process?

At that point, no. But she has a new project coming out that we did closely. I made the track and then sat on it for a few months. I was like, “I should try and get somebody on this.” We just met on tour, so it wasn’t a hard thought. I was like, “damn, Bbymutha would sound tight on this.” So I sent it and she was like, “I got you.” What she sent back exceeded all expectations, for sure.

Yeah, it really goes hard. Is the process similar with MIKE, or Earl, for instance, who have a more placid flow style?

MIKE is up there. He’s one of the ones, his new shit always has me hot. I’m like, “alright, I’ve got to try some new shit now.” But I swear, I really don’t think about it too much until the end. Even the Danny [Brown] track – I’ve known Danny for ten years, but I don’t press the issue like, “You need to get on these beats.” The one that we finally got, it was just one of those things: you know when somebody will work well with what you made. I don’t want to ever press it until I feel like it could really be something. The end process was thought out, but the creation part is just freeform. And I respect everyone else for diving into that world with me.

“Sampling – it’s a respect for the music that’s already been out there, to repurpose it and keep it alive.”

I interviewed Gunna a couple weeks ago, and one of the things that I asked about was his relationship to the producers that he works with. In a sense, his producers, Taurus, Wheezy, and Turbo, are his band – his Paul, George, and Ringo. From your perspective as a producer, would you agree?

The music is a second thought, really, because I’d rather just live life as friends. If we make some music, that’s cool, but if not, it’s not about to tarnish the friendship. Like, “Oh, you won’t make a song with me? You don’t want to work with me?” It’s all good. We can still kick it.

How long have you and Earl been working together?

It’s been about five, six years. I met him through my homie Remy Banks in New York. He went on tour with Earl, and yeah, we became friends through that. I just traveled the world with that man. Seen a lot, seen a whole bunch of things. We watched the whole pandemic come into fruition.

Shit! Can you tell me more?

Wild. I’m curious about how you approach DJing – either on tour with Earl or just for yourself. Does it offer you something that production doesn’t?

It’s a pretty similar process. I made music first, then I started DJing, so it was the logical next step. How can I incorporate all the music that I’m trying to produce into a logical form? DJing – it’s freeform, and does all the things that I’m into.

Do you feel like it gives you the ability to kind of mold the tracks, like sculpting two pieces of clay together?

Yeah, it’s like a bunch of different-colored clay. Not the same, but I try to make it work.

The music video for “The Band” is made of found footage of you guys on the road, spliced together. I’m interested in that, because it operates on the same principle as sampling, or of quilting, or any of these other forms of collage that can be traced through traditions of the diaspora for centuries. Do you have any thoughts on that?

Definitely. Especially sampling – it’s a respect for the music that’s already been out there, to repurpose it and keep it alive. Present it in a new light. If you like a song with a sample, you’re like, “oh, what was that?” And then you get thrown into that whole world, too. So it’s like putting a puzzle together. There’s so many songs out there, and so many artists that might never have even been thrown into the conversation. Not saying that something’s relevant just because someone samples it, but it’s a respect for what was done before.

“I’ll have a story in my head, but I’ve got to figure out ways to express that story differently. If I rapped, I could just tell you, but I don’t.”

I’ve been thinking a lot about DJ Screw recently – I have this feeling that he’s getting more acknowledgement now in the forms of biopics and shows. He’s someone who was really on that, though, you know? And actually created a new musical lexicon.

They need to drop those movies soon, because he’s definitely being brought back up on the internet. People are pushing it though. Like, “oh shit, this whole new genre, ‘slowed and reverb.’” It’s like, “no, that’s not where it came from. DJ Screw started this.” It’s that white conversation of, “yeah, this is brand new. We’ve just found out about this. We’re doing it now.” And it’s like, “oh, that’s not how it happened.” We really caught them in the act, rewriting the history book.

The fact that George Floyd was a member of the Screwed Up Click is another layer of it too. Imagining their lives, them working together – it’s heartbreaking, because so much of their music is about the experience of oppression and excessive policing.

Yeah. If you go back, a lot of people’s music refers to the situation – way before this situation happened. That’s why it’s funny that people are like, “this shit is brand new, I never knew it was like this.” This has been the conversation since the beginning of the music, you never really listened to what you was listening to. It’s been prevalent this whole time.

I feel like you can trace an arc on Oblivion – it starts out relatively sparse and gains a lot of energy midway through before tempering again. I understand that you produced it under quarantine, so I was curious if the track order follows an emotional arc during that period for you?

Of course, but it goes back to the collaging you were talking about. I had the songs, but there was a certain point where I was like, “okay, I think it can tell some sort of story, or have some sort of linear movement where you’re like, ‘this is a project’ rather than, ‘this is just thrown on the walls.'”

When you talk about music, it’s very tactile – the way you’re like, “It’s a little puzzle.” It seems like you think about it in multiple dimensions.

If it happens that way, it’s because I just like to get shit out pretty much as fast as I can, and then I’ll go back and dive into it. It’s really just a release, a little therapy session at the music program. Then I’ll think about it, or think of some video ideas or something to go along with it. Because I don’t rap, I kind of have to tell my stuff in a different medium. I’ll have a story in my head, but I’ve got to figure out ways to express that story differently. If I rapped, I could just tell you, but I don’t. When I hear music, I hear the raps in my head, or I hear what it’s trying to say, and I just need to figure out how to express that the best I can, without saying anything.

GAIKA: AT WHAT POINT DO I ENCOUNTER GOD?