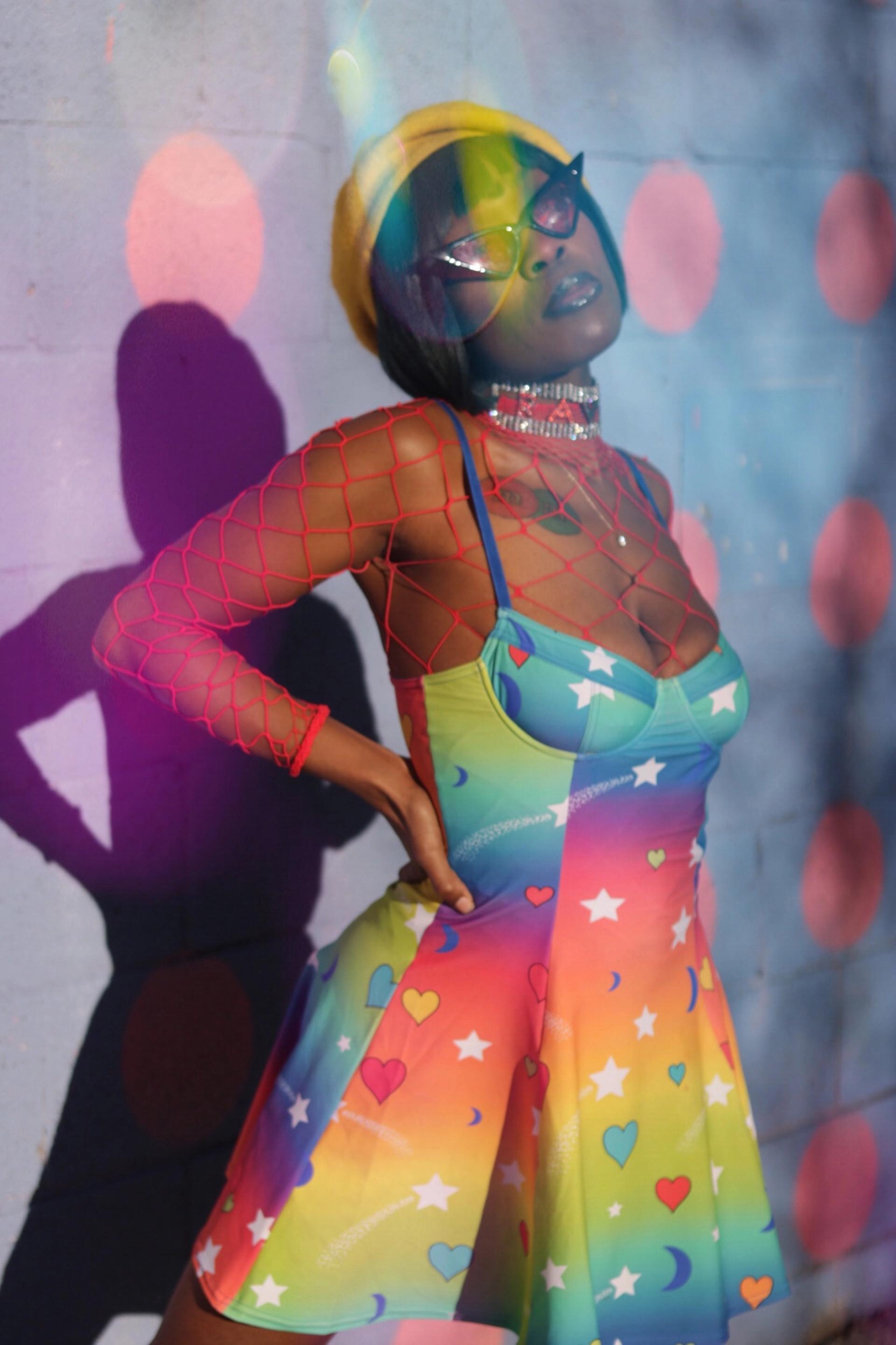 Artist and rapper bbymutha is an American mother of four, known for her uniquely sinister lyrical flow, combination of trap, electronic, and punk influences, and uncompromising approach to expressing her personal truth. Born Brittnee Moore in East Chattanooga, Tennessee, bbymutha grew up across strict Muslim and Christian homes. She started making music around 2013 (the same year she gave birth to the first of two pairs of twins) and found her voice in the Soundcloud ecosystem, amassing thousands of committed followers across multiple platforms, and earning plaudits from Erykah Badu, Juliana Huxtable, Pose’s Indya Moore, and former Odd Future member Earl Sweatshirt, with whom she is currently on tour.

Moore is best known for her 2016 viral hit “Rules,” in which she lyrically engraves commandments on how to avoid being a casualty of the many forms of patriarchal violence. Since “Rules,” she has released over five EPs – each of which gives an in-depth view of her life experiences, taste, and the community for which she stands.

Bbymutha’s interpretation of the traditional “gangster rapper” incorporates mystical and spiritual practices into her lyrics – an interest in the occult got her through some extreme moments in her life, and she regularly pays homage to her journey in her work:

Don’t waste your passion on a girl like me
I won’t return it
I prolly use that shit to light my fucking blunt
And use the ashes in a ritual
Now you can’t get over me
It’s spiritual
Cast me out, rebuke me
Lets get biblical
Foaming at the mouth
He need a physical

Importantly for bbymutha, it is impossible to rebuke the church without rebuking the capitalism that funds it. She often talks about how racism, colorism, and capitalism systemically hold up sexism and violence against Black femmes. Bbymutha does not simply rebuke religious, capitalist, and racist institutions, but offers herself up as a muse, fate, or fury in a world she feels is poised against her and many other single Black mothers.

Mutha, fuck that nigga
He gon’ leave you for a yellow bitch
She gon’ fuck his credit and his life up
I could never trip
Bitches love to play in my aesthetic cuz it’s cute to
All that baby hair ain’t worth a damn when niggas shoot you

In a recent phone call, I talked with bbymutha to discuss her journey towards the occult, being an artist who happens to be a single mother, the performance of class, and why book learning doesn’t count for shit.

Where did your taste in music come from?

I feel like when we’re kids, we’re often exposed to just one type of music. I grew up in an extremely religious household in the South: my mom was Christian and my dad, Muslim. My mom was against any form of secular music growing up, so I didn’t really develop a taste for music until I got to high school. In high school, I was what you’d call the CD Man. I would make CDs and mixtapes for people. Exposing myself to so many different types of sounds helped me find my voice as it applies to rap. I hate when people try to box rap music in. It’s one of the reasons I love OutKast so much. They were never stagnant or afraid to try new things. With music and technology being the way they are, people are afraid to push and be authentic to their own voice. Hell, as long as the beat sounds good and I can find my flow, I will rock with it.

How did growing up in a Christian and Muslim household influence your spiritual beliefs and practices?

It kinda just got me to be at a point where I was like, “Fuck religion.” My parents would fight over it and it was so unnecessary. I didn’t believe in much of anything until there was a stint where I was homeless. When I was pregnant with Khloe and Tyler, I would have to leave the shelter I was staying in every morning, and I would just go to the occult section of the library. I don’t know what brought me to that section, but I started to read about Wicca, and it just made sense to me. Then I started reading into witchcraft and tarot. What I did was take things that made sense to me and create my own personalized thing. Because that’s how spirituality should be. You should customize your spirituality because it’s your spirit.

You also watched a lot of anime growing up . . .

I’m really inspired by the girl characters in anime. For research purposes, I’ve been watching Revolutionary Girl Utena. She seems to be bi or gender non-conforming in the show, but the hair and fashion in anime in general inspires me. Before it got popular to wear colored hair as a black girl, I would be in the club, back in 2011, with purple and red hair, and people would be looking at me like I was crazy. But it was because of the anime girls!

I grew up Atlanta in this area formerly known as Little Vietnam. A lot of your music hits me because I was a kid raised by a “baby momma” and went to school with black women who also took the title. What frustrates you about how folks limit single black mothers despite systemic causes that are out of their control?

It frustrates me that society believes single black mothers are only meant to carry, give birth to, and raise kids without having a sense of purpose and meaning for themselves. My mom’s a painter. She put her life on hold to raise me and my siblings. Now she’s in her 50s, has a different husband, and is finally having the opportunity to get her work into a gallery space. Seeing my mom get excited about this warmed my heart because it reminded me that my mom is a person with her own hopes, dreams, and goals. Some people believe that by putting themselves last they’ll come out on top. I don’t subscribe to this idea. I just don’t think life should work like that. Even while raising kids, I believe you have to keep yourself first. I don’t sit and argue or hit my kids. I don’t get mad at them when they ask me “Why?” If I treat them like people, they will treat me the same in return. To me, how I raise my kids as a single black mother, is all about staying true to your hopes and dreams. I have to be doing that myself, too, and as long as I’m not putting them in danger, I don’t see what the problem is.

What you are getting at here too, is how proximity to privilege and access – even if that’s only thinking you’re the smartest – determines whether you’re “allowed” to pursue you hopes and dreams.

Yes, exactly! That’s a good way of saying it. Smart people really are just assholes! I feel like people use book knowledge as a superiority thing. I was recently tagged in a tweet where there was a video of people going up to other folks randomly in the street, pulling out a map, and asking people to name a country on the map. A lot of folks would say “Africa,” and the folks in the video were like, “Africa is a continent,” then laughed at them. And I’m like yes, they should know geography, but if they don’t, why is that funny? I don’t know why it’s funny to laugh at folks who don’t know things. I mean, I know Black girls who don’t know how to read, but they are out here taking care of their families, raising kids on their own, and you’re going to sit here and further ridicule them just because they may not know a country on a map? Wow, congratulations – you are a flash card. Fuck a map!

In your music you talk about a work ethic that values business over romantic pursuits and patriarchal shenanigans. Can you talk more about these men and why is it important for you to point them out with your lyrics?

They just niggas who are thirsty for attention, love, and everything else. They don’t know how to express themselves and they just do fuck shit all the time. People believe Black women are just supposed to take everybody’s BS and I got sick of that a long time ago. I watched my dad jump on my mom, his ex-wife. I saw my mom go through stuff. I went through stuff. I am not going to be with someone who treats me like my dad treated me. Abuse isn’t just physical and men are very abusive. And honestly, it is their fault, but it is also generational and it needs to be acknowledged so it can be fixed. And since people don’t want to acknowledge it, I’m just going to talk about it all the time. If you don’t know what’s wrong with you, I’ll tell you what’s wrong with you. If there’s one thing all of my kids, especially my sons, will be able to say, it’s that I taught them how to be accountable for their emotions. A lot of these niggas are raised to be accountable, too, just most of them choose not to be.

You talk a bit about sex and orientation, and sex positivity. How has that impacted your parenting style and career?

I don’t let my bisexuality impact my parenting style. They know I like girls. They don’t care. I don’t mind. The other day my daughter was calling somebody her “lock and key,” and they were like “she gay, she have a girlfriend.” If anything, it should make them feel like they can be more open about stuff like that. They know I’m their momma and that’s what matters. As for how it influences my career, I don’t talk about it much either. I really don’t think people give a fuck. There are people who will base their entire persona about their sexual orientation, then they end up getting boxed in. I just don’t want to do that. It’s a part of me and I’m not hiding it. But I’m also not out here being like, “bbymutha the BISEXUAL BAD BITCH!” I’m also getting to a point of wondering if that is what I am. I don’t really give a fuck who you are. If I like you, I like you. Like I don’t even know if there is a label to put on it.

It really depends on what you want for 2019. Maybe some prosperity? We all need that. Get some green candles and money oil and run that up. Hell, maybe even some peace to. We need that too!