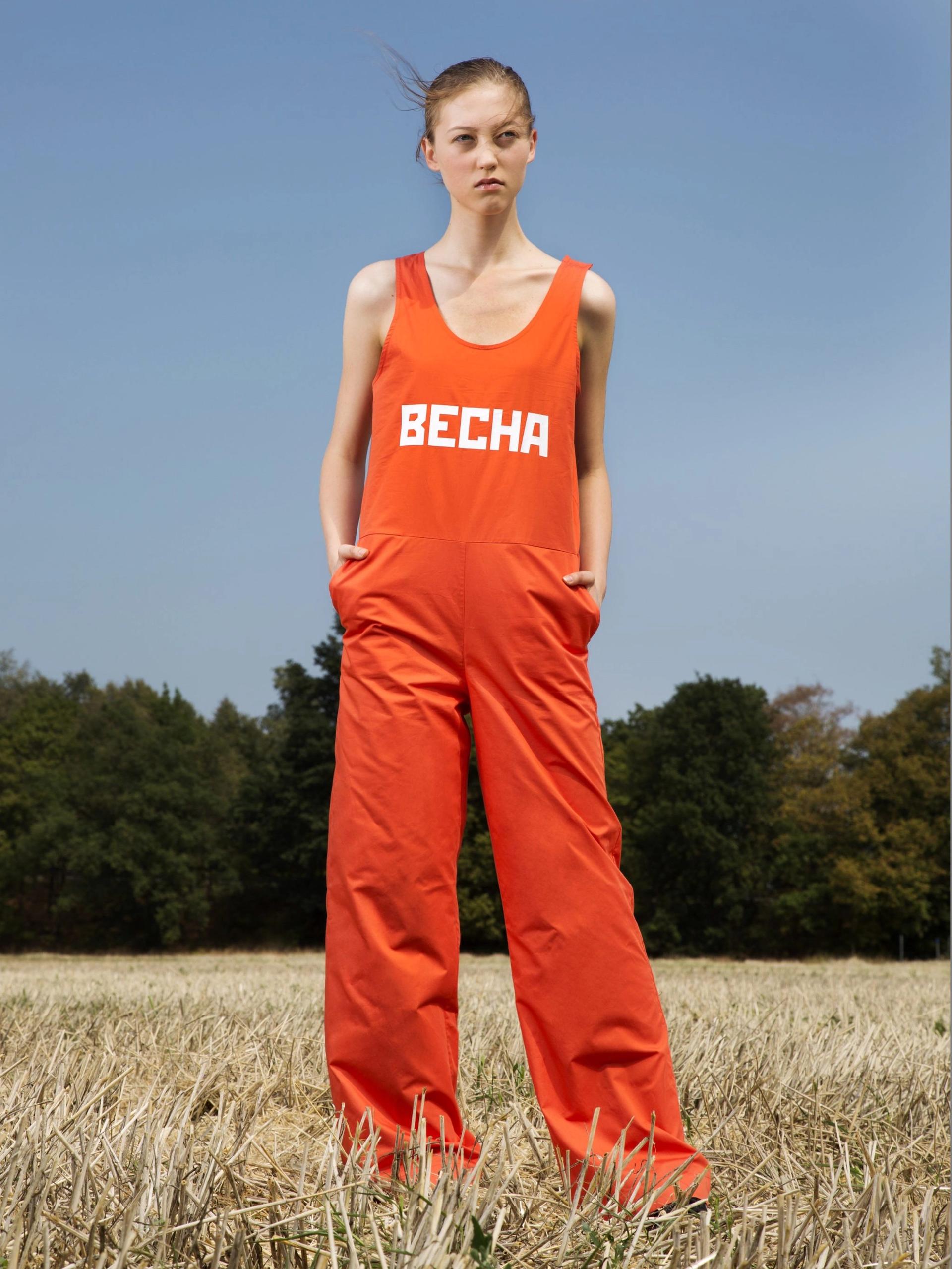 Of all the New East’s thrilling designers, few are as overtly influenced by Communist aesthetics as Yulia Yefimtchuk. Just what does the Kievan who grew up wearing a Soviet school uniform find so appealing about the “clash of innocence and militant politics”?

The synchronous interest in Ukrainian politics and Ukrainian fashion was marked during London’s AW16 Fashion Week, when the British Council co-organized with Ukrainian Fashion Week a showcase of emerging Ukrainian designers. Entitled Fashion School Rebels (a seemingly innocuous title which resonates gravely in the light of the 2013 Euromaidan revolution and ensuing conflict), it featured young talents like Yasia Khomenko, Yana Chervinska, DZHUS, Masha Reva, and FROLOV, shot in the video below. These practitioners, all under or around 30, have experienced a series of revolutions: as well as Euromaidan, the Orange Revolution of 2004 is well within living memory, with some designers old enough to witness the end of Soviet rule in 1991.

“Building a modern, global fashion reputation is no easy task in a country where excessive regulation, a lack of state support and outdated fashion skills training mean young talent has to fight to get ahead,” the event notes stated sharply. What it didn’t say was that the show was also tapping into the recent vogue for post-Soviet fashion talent, be that Gosha Rubchinskiy, Vetements-associated stylist Lotta Volkova (who shot a Gosha special for the most recent issue of 032c) or the Balenciaga-blessing of Demna Gvasalia.

In the midst of this is Yulia Yefimtchuk, one of Ukraine’s most radical and prominent designers. Born in Kiev, she was raised in rural Ukraine before returning to the capital as a young student of fashion at the city’s Institute of Applied Arts – today, she operates her growing womenswear brand that counts stockists in Tokyo, Seoul, Paris and New York.

Kiev, however, remains her hometown, and her main source of inspiration. Her collections heavily drawing on the heritage of post-Soviet Ukrainian visuality: the bright red, the stripes, the bold Cyrillic letters. Born in the 80s, Yulia grew up to with the highly visual reformative politics of Perestroika, which blended aestheticised politics into daily life through everything from propaganda in the streets to children’s school uniforms (her AW16 mood-board, featured below, featured images of youth organization Soviet Young Pioneers).

Yefimtchuk decodes and deconstructs, through the format of her designs, the visual matter of a contemporary Ukraine stuck in its post-Soviet identity, faced with a deep financial crisis, stagnant revolution, the festering wounds of a civil war and massive political corruption.

You received special recognition from Opening Ceremony at the Hyeres Festival in 2014, shortly after your graduation. How did that happen? How did it enable you to expand your practice and name?

Yulia Yefimtchuk: It happened with my capsule collection where I first used Cyrillic slogans directly. I used propaganda slogans from Soviet posters – “С каждым днем все радостнее жить” (“Every day it becomes happier to live”), “Труд” ( “Labour”), “Миру Мир” (“Peace to the World”), and it was a pretty new thing. The jury asked many questions during the presentation and particularly about the meaning of the Cyrillic slogans. I explained them, and why they are still relevant today. I remember all the participants telling me that I would get the main prize, but I knew that opinions on the collection were very polarized, and it was risky for the organizers of the competition.Carol Lim and Humberto Leon from Opening Ceremony were the part of the jury: they liked the collection a lot, so they invented this recognition especially for me. It was really great. After this competition and this provocative collection, my work expanded globally. I got a small team of people to work actively on a brand.

Do you find it important to engage with your cultural and national background in your work?

All these features of my art are generated inside me. I try to listen to my inner voice: I won’t be into it forever, as it would be boring – I am at the beginning of my way.

How does fashion become a medium or tool for which to discuss politics?

Politics has always been in art and fashion. It always has a slight influence on what you draw, what music you create and what you wear. It is everywhere, even in your cup of coffee.

I find it interesting that young fashion consumers are interested in wearing political symbols and messages. Does it matter to you whether the context of your practice, political and otherwise, translate to the consumers? Can your clothes be worn the wrong way?

I tend to think that wearing this kind of clothes is the silent protest against the old system. I like when my clothes are worn by simple people without special knowledge of trends and fashion, it is more important what is inside their head and what is in their eyes.

Tell me about your SS16 collection – how did this research process start? How do you work with the historical references in your garments?

I watched a documentary about Mikhail Kaufman’s In Spring and was deeply inspired. I started researching everything connected to it – reading critical articles, thinking about the images, the music. Then came sketches, colors, and fabrics.

In Spring is a fantastic piece of abstract cinema but is also a love letter to Kiev in a way. Do you share this affection for your hometown?

I do not know much about the private life of Kaufman, but I think when people create this kind of work, they live mentally far away from the reality that they reinterpret.My affection for my city is not always so sincere, but for sure, during spring Kiev evokes only warm feelings.

With your FW16 collection, did you consciously look at children in the Soviet Union?

I like this clash of innocence and militant politics. I am from a generation that wore Soviet school uniform. At school, I found it wild, but I liked the black aprons a lot. I also remember getting excited about school photos of my parents who were Soviet Pioneers. I liked the style of uniform and concept.

Ukraine and the former Eastern Bloc is in a fragile political situation at the moment, which seems to weirdly synchronize with the increasing interest in its fashion. What is your view of the Ukrainian fashion scene?

Ukraine was always politically and economically unstable. People have got great patience and capability to survive within such conditions, which will be strange a bit for citizens of (western) Europe. The fashion scene is is just emerging.

Tell me about the other Ukrainian designers in the shoot you did for the London Fashion Week showcase. What do you think brings you together as a group?

Free spirit and creative idea collected these very different and young brands. I like Masha Reva as a graphic artist, Yana Chervinska and RCR Khomenko are very nice.

There seems to be a strong emphasis on nation-building and patriotism in contemporary Ukrainian politics. Do you find these sentiments present in Ukrainian fashion too?

(This emphasis on) patriotism and nation-building looks like burlesque: there’s nothing serious about it. People have no respect for each other, and that should be the beginning.

What interests you in Ukrainian and European politics at the moment?

I am interested in the result of the permanent battle of power and money.

Did you ever consider yourself as a part of an emerging canon or ‘group’ of designers emerging from Ukraine, and beyond this, the former Eastern Bloc? I’m thinking of course of the group of Ukrainian designers, but also the broader scene that includes Gosha, Lotta Volkova and Vetements. Do you know any of them?

I met Gosha in Georgia three years ago. I do not know Lotta personally, but we communicated online. (Vetements member) Guram Gvasalia came to Kiev with the presentation of his book, which was really interesting to attend.

There’s a political dimension to dealing with post-soviet aesthetics and iconography, and in really diving into this visual realm. I wonder how designers navigate this?

I try to explore different historic moments, art directions and social issues that I find relevant to present people. Sustainability and social responsibility are the points I follow practically in my work.

Do you hope to change the way the fashion system and luxury works?

Everything is fast and ecologically harmful. Young visionaries need to be supported by press and stores, who should risk supporting creativity.

Demna Gvasalia on Vetements, Balenciaga, and THE SYSTEM