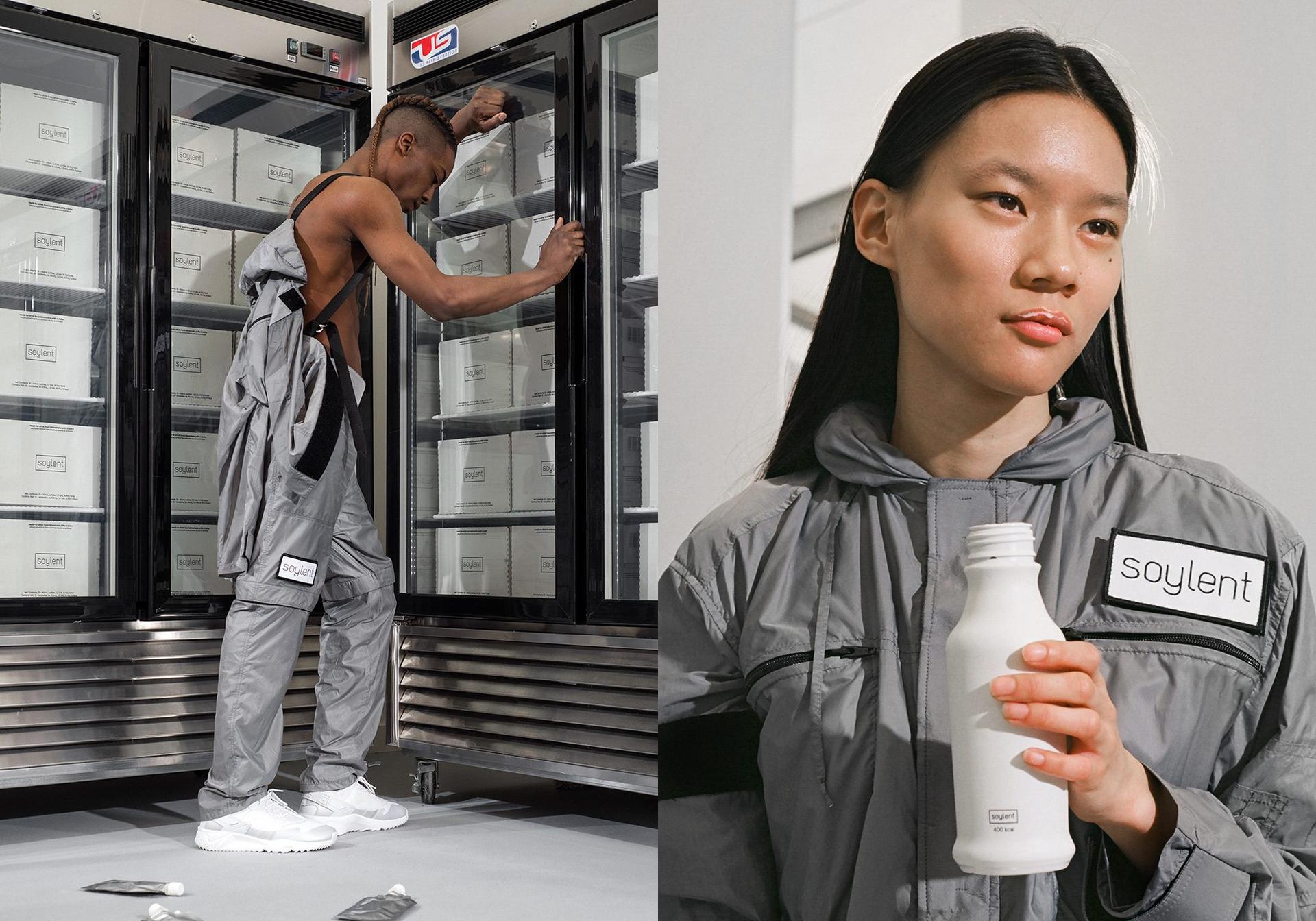 In a world of increasingly scarce resources, efficiency is coming into fashion. Versatility develops a sexy new ring. The artist Sean Raspet is devoted to the idea of a multi-tasking everything: his presentation with Berlin gallery Société at this year’s Frieze New York doubled as a trade fair promotional stand for Raspet’s day-time employer Soylent.

The food start-up produces an inoffensive-looking drink that supplies the human body with all the nutrients it requires, while saving consumers time and money by removing the need to either cook, or chew, or eat out. It is Raspet’s mission as the company’s in-house flavorist to make the gooey future food tasty, too. “I consider all the flavors I design artworks,” he says. At the art fair they were presented bottled-up in stainless steel fridges, and served to the visiting public for free.

Fittingly, Raspet commissioned the Berlin-based fashion designer Nhu Duong with the design of potential Soylent staff uniforms: functional and chic at once, designer uniforms lie at the end of the rainbow where Marxism and fashion meet. Modeled by Michael Xufu Huang, Eliot Glass and Yulu Serao, the Soylent grey garments follow this narrative in detail – their versatility maximized through detachable components, while maintenance is minimal thanks to microfibre fabrics that need not be washed with water. Dirt just runs off the futuristic design. Duong explains this marriage of multi-layered belief systems to 032c.

How did your collaboration with Sean Raspet come about?

I know Sean through his gallerist, Daniel Wichelhaus from Société in Berlin, who was actually the one who suggested us all to work together on this project. The presentation at Frieze was officially a Société booth showing Sean Raspet, as brands cannot rent booth at art fairs for promotion. In a way the project blurs the boundaries between promotion, sculpture and art fair booth. So adding a fashion element made totally sense to complete the idea of the booth as a promotional event and turned it into a stage for a fashion shoot and lots of selfies.

What was your conceptual approach to the design? How does it relate to Soylent?

We wanted to create a garment that reflected some of the aspects of efficiency and versatility that Soylent itself has. So on the one hand we were started looking at nano-materials, but on the other hand we wanted to rethink the idea of a uniform into something that is versatile and can be personal, so we added detachable parts, straps, zippers and velcro patches. I think there is always an interest in technology in my garments, although I am myself not a very technological person, but rather interested in ways that clothes can be activated through function or materials.

You have mentioned that self-cleaning materials mimic the effect of certain plants with self-cleansing leaves: technological advancement is often inspired by nature. Do you think of artificial and natural as a dichotomy, or is the line between them more blurred to you?

In my choice of materials I have always been interested in the dichotomy of artificial and natural materials, something that can be directly seen in my work. But to be really honest, this is more of a personal attraction to certain materials rather than a conceptual choice. In Vietnamese culture there is an attraction to such things as plastic flowers or fake diamonds, so I basically grew up favouring effect over substance. At the same time Sean is really taking it to the next level, as he fully embraces the “artificial”, working with chemical compounds. He is currently creating new flavour formulations for Soylent.

Are the overalls going to be for sale, are they considered collaborative artworks of yours and Sean Raspet, or will they become Soylent uniforms even?

The overalls are conceived as a prototype for a more efficient and sustainable alternative to traditional clothing. They were produced specifically for the event at Frieze and aren’t for sale. Now that the event is over Raspet and other Soylent employees will be wearing them and testing them out in their day-to-day lives. I can’t yet comment on whether they will become Soylent uniforms.

Your designs are avant-garde yet always also utilitarian. Do you see the uniforms as a distillation of that approach? Is utilitarianism glamorous to you?

Fashion has a clear function: it should be wearable. At the same time, fashion constantly questions this function, trying to push against its limits, whether these be physical, technical, or even social limits. If you look at the great collections from the past, they were experimental but at the same time directly relevant for the everyday life of people. Fashion always seeks out these functional edges, balancing on the fine line between function and decoration. I think utilitarianism is not glamorous but playing with its idea can be glamorous.