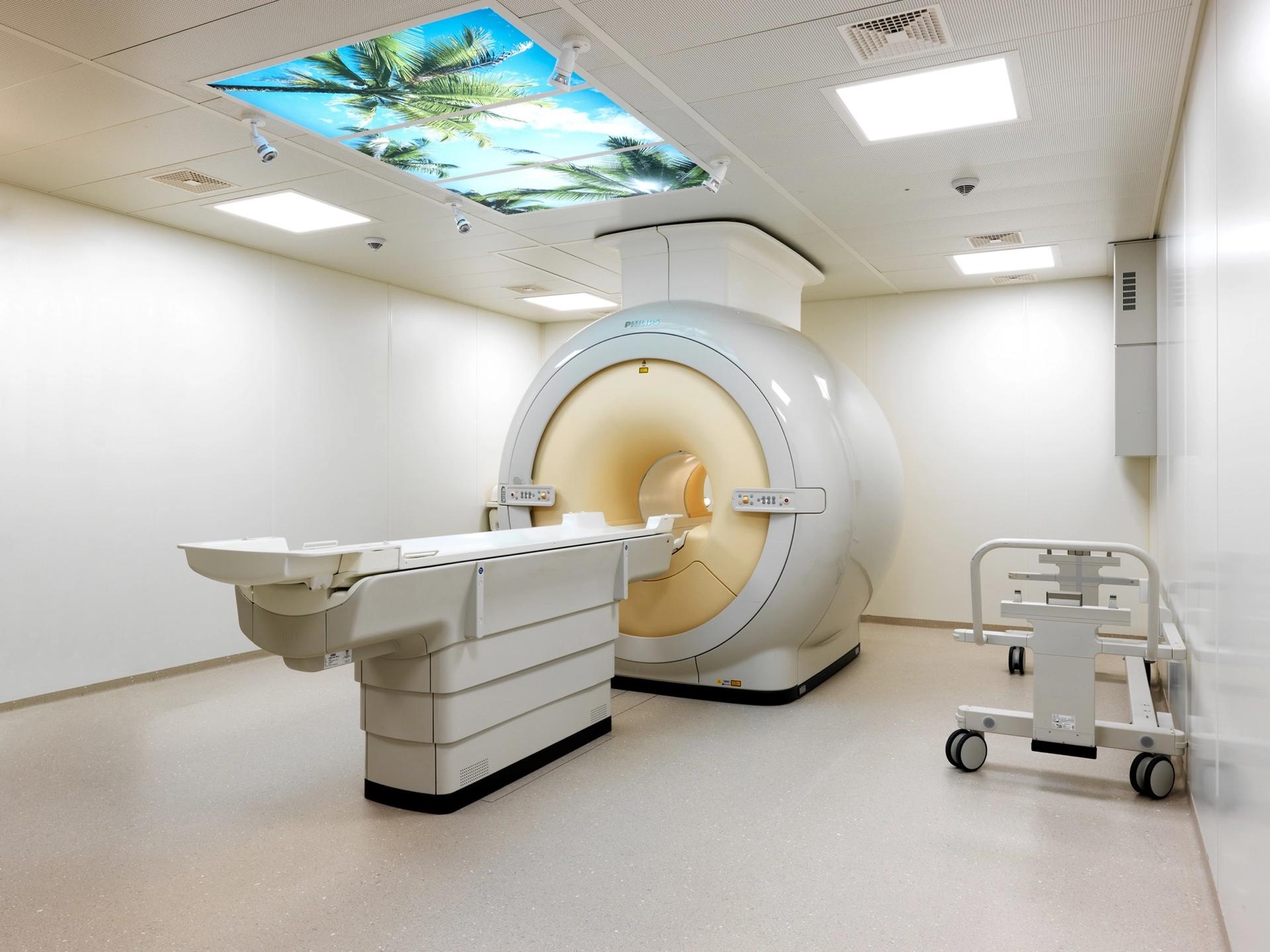 Human health is a sensitive subject often discussed in euphemism and metaphor. Highlights of the past year include Boris Johnson’s surreal viral rhetoric; more ubiquitous is our daily reference to “red zones,” “flattening the curve,” and of course, “lockdowns.” Yet it is health infrastructure itself – or at least, architectural visions for it – to which such inventive language is assigned in Phylum H: a 2019 monograph from Hatje Cantz looking at 20 years of hospital designs by the French practice BRUNO SAUNIER ARCHITECUTURE through the biological metaphor of the phylum.

Danger lurks in metaphor. In their seminal text Metaphors We Live By, George Lakoff and Mark Johnson assert that the primary function of metaphor is understanding, which is basically just a retweet of Aristotle who, more than a thousand years earlier, wrote that metaphor “consists in giving the thing a name that belongs to something else,” and that “to produce a good metaphor is to see a likeness.” And if metaphors can be “good,” they can also be bad: sometimes, rather than illuminate, they obfuscate. At other times, the problem is the cliché – a conceptual image withered by usage and time to the point where no meaning is conveyed at all – and the metaphor is pronounced “dead.” It’s tricky territory, if you think about it: a “dead metaphor” is itself a metaphor too, and a pretty banal one at that. Fall too deep down this wormhole and you may end up like Nietzsche, who a few years before succumbing to madness argued that truth itself is simply a “mobile army of metaphors” rendered meaningless by overuse – “coins which have lost their pictures and now matter only as metal.” A rose is a rose is a rose, which is to say, it’s not.
Metaphor’s problems only get worse when their deployment has stakes beyond semantics. In Illness as Metaphor, Susan Sontag famously critiqued the use of metaphor in medical discourses, arguing that rather than palliate, verbal transpositions such as comparing illness to a battle often exacerbate patients’ feelings of inadequacy or personal failure. Architecture falls prey to poor metaphor, too. For example, a whole generation of architects trained in the early 1990s convinced themselves (courtesy of hack job readings of French post-structuralist theory) that glass and steel configured into geometric planes (courtesy of corporate patronage) were “rhizomatic,” and therefore politically revolutionary. Mix it all together – medicine, metaphor, and architecture – and things could get dire.

Phylum H, a substantial tome dedicated to twenty years of hospital designs by the French practice Brunet Saunier Architecture, takes its name and organizational logic from a biological metaphor, too. Borrowed from evolutionary taxonomy, the phylum is used not simply to explore built healthcare facilities, but to consider the possibility of an archetypal one. As architect Julia Tournaire writes in her preface, Phylum H is “the common ancestor of almost a hundred hospital designs, of which twenty-five have been built—not in the sense of being primal or the original, but as ‘utopian.’” The specter of Deleuze and Guattari, never far behind, is invoked to assert the model as “the optimal deterritorialized residue, the reservoir of a collection of potentiality” ­– tough phrases to digest, full of sound and fury but light on significance. (It’s also an odd claim: the biological model employed is arborescent, which is the very target of the critique lodged in A Thousand Plateaus.)

Readers may be surprised to encounter an interview with René Zaragüeta i Bagils, a theorist of scientific classification at the Sorbonne who appears to doubt the viability of carrying over this framework as a method for analyzing architecture. First, Zaragüeta I Bagils casts uncertainty on scientific claims to truth in general: “How can we say that today we study reality,” he asks, “when we know perfectly well that all the tools and theories on which our hypotheses rest will be shown to be false in the years to come?” He also takes aim at scientific classification itself, which either attempts to fit things into a pre-existing or “natural” category – such that when something doesn’t fit into a readymade class, it can’t be identified – or risks tautology in its attempts to shed light on evolutionary processes. It’s easy to get lost, especially if you’re just trying to understand the design strategies of an architecture practice. As Zaragüeta I Bagils puts it, “there isn’t really any creative activity in classifying,” since it is retrospective not projective, and operates by shutting down possibilities, rather than opening them.

Zaragüeta I Bagils’s cautious tone is echoed in an interview with Kean Walmsley, a researcher at Autodesk specializing in automative and generative technologies, who nonetheless describes himself as “agnostic” about new tech – for example the latest Building Information Modeling (BIM), heavily employed by Brunet Saunier Architecture. These conservations are nestled between the book’s chapters, letting some air into Phylum H’s drier close analyses of built projects born of the firm’s “phylogenetic” model. Essentially, the method applied is to take a shared feature such as “Lobby and Public Spaces,” and look at how the firm addressed it in various built projects — to consider the forces that determined its specificities, the similarities (or differences) of approach, etc. Read alongside these qualifying supplements, the legitimacy of “phylogenetic” as a classification itself appears shaky. None of these practices have to do with natural “evolution,” but with conscious decisions made by a select group of actors based on prior experience and existing knowledge. Still, the schema affords an efficient means of linking design cause to design effect, and generally laying out the firm’s process: what seems to work, and what does not. In other words, it’s dumb, but gets the job done.

“Mix it all together – medicine, metaphor, and architecture – and things could get dire.”

Phylum H. is, despite its M.O., a book that’s hard to classify. At a surface level, it’s not all that different from any other retrospective monograph featuring pleasant photographs alongside floor plans and supplemental texts. The graphic design isn’t groundbreaking, but then again neither are the designs it features – hospitals are supposed to be quiet, functional, and sterile after all. The textual supplements problematize the project more than aggrandize it, almost begging a diagnosis. The typical architectural reader will probably not be able to: theory, like metaphor, is more often a prop in design discourse than an actual probe. The book asserts confidence and performance, yet does so with reticence, a respect for the scientific unknown. If Brunet Saunier Architecture is trying to sell itself, they aren’t doing that great a job. But what if they aren’t? This may well be – bear with me now – a book about figuring out how to build medical facilities that work well, an ongoing process in which their clunky metaphor is not an inflation but a tool, a way of making sense of what they’ve already built and improving what they will build in the future?

Brunet Saunier Architecture’s phylogenics, notes Zaragüeta I Bagils, requires a common ancestor. The taxonomy therefore orbits around an ideal, which each built project resembles in any number of ways. But this works better backwards than forwards. Instead of producing an ideal out of the blue and then iterating on it, which would require endless assumptions, the architects might read retrospectively to find forces and actors that determined certain outcomes without their awareness. These are “convergences,” suggests Zaragüeta I Bagils, or “a sum of resemblances that is not the result of a unique historical process.” In another text towards the end of the book, Gerold Zimmerli, a former architect officer at the Ministry of Health who has collaborated with the firm for thirty years, considers the value of historical propositions for an ideal hospital, from Jacques Tenon in the 18th century to utopian imaginaries of the 1970s. “Even today the models from ten years ago don’t seem to suit present needs,” he writes. “Maybe the ideal hospital is not a question of design outline, but more about sensitive concepts such as human interaction or well-being?” To architects this might seem like an oxymoron—the ideal is the outline, obviously. And, anyway, lose the question mark. Stand your ground. Can these architects get anything right? It’s here that a subtle brilliance seems to emerge out of the equivocating, self-contradicting, and general cautiousness of Phylum H. In effect, the project shares some bad attributes with many other architectural projects, but it nimbly evades being lumped in with other victims of mangled metaphor and pseudo-scientific pretense. The effects just aren’t the same. The buildings seem to work. The classification comes undone. Metaphor, in other words, is maybe less important than motivation—the purpose of its deployment, whether as rhetorical defense, promotional media, or self-reflective rubric. Alongside a host of pragmatic responses to the various demands of hospital design, a pertinent lesson from Phylus H. might be: “Mix metaphors if you want, just don’t be an asshole.”