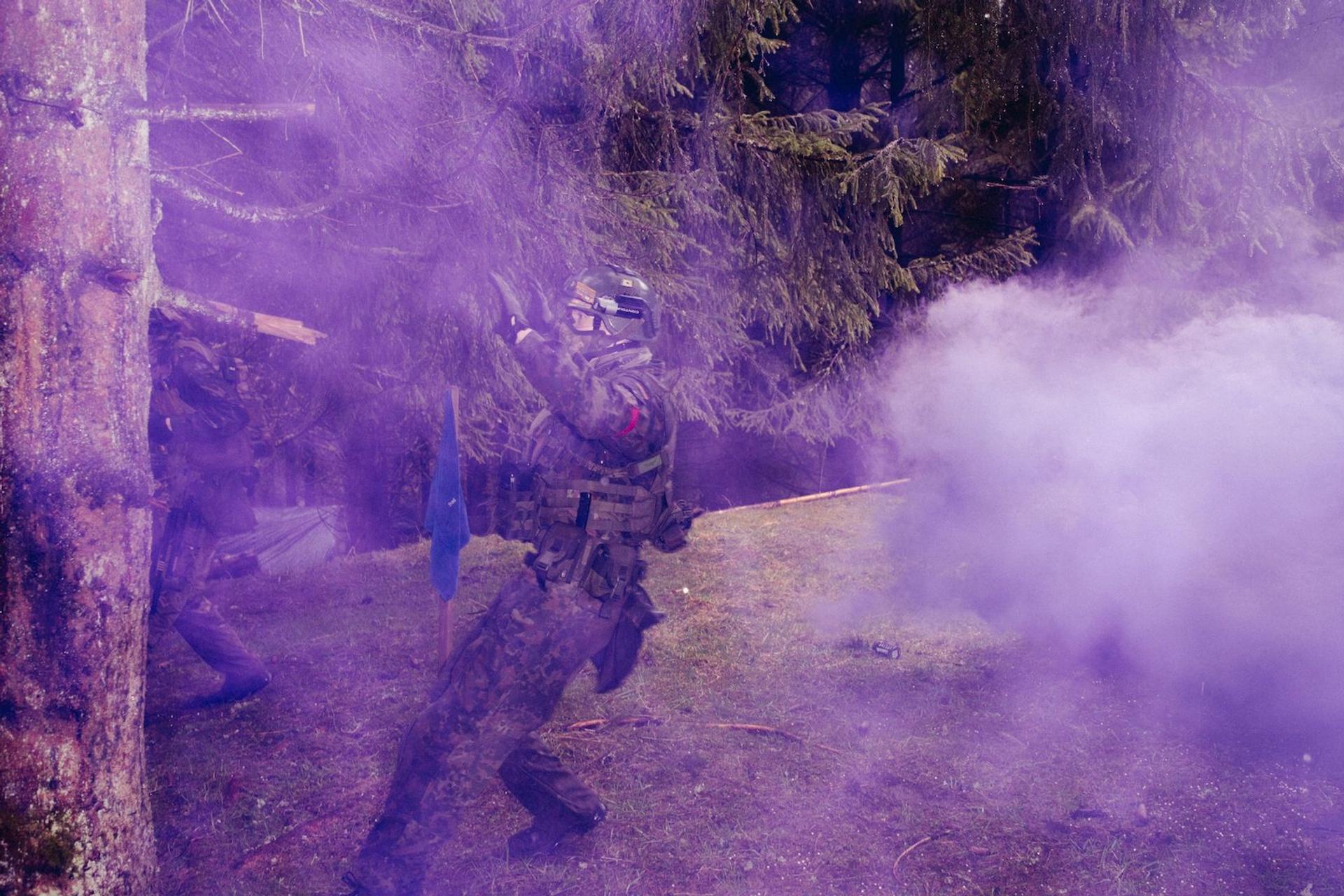 In 2002, around the time George W. Bush declared America’s entry into the global “War on Terror,” a new game, sport, or perhaps entire subculture started gaining popularity in the United States. Airsoft is a fully-functioning military simulation – or “MilSim,” for short – in which civilians play soldier, adopt real military tactics, and fire imitation weaponry – from BB pellets to Haribo “grenades” – while rampaging across convincingly life-like battlefields.

The sport, which traces its origins to 1970s Japan, is now a global phenomenon. While the US might be Airsoft’s leading market – home to a bespoke economy for gameplay strategies, apparel and weaponry, as well as the community’s key spokespeople – the sport is also played in Australia, Britain, Russia, and Germany. It attracts Call of Duty aficionados looking to level up, quit the screen, and immerse themselves in modern warfare, without accountability. It questions how we as a society have managed to abstract warfare, and how a battleground can be “safe,” “fun,” and even a place people pay money to be.

Today we are living in “an era of civilians who are growing ever more extreme in their adoption of military clothing,” culture critic Troy Patterson wrote in a recent piece for The New Yorker. Patterson notes the remarkable ordinariness of seeing Louis Vuitton tactical vests, Junya Watanabe flak jackets, and even an Anti Social Social Club riot shield on the runway. “Once upon a time, fashion only osmosed military looks after they had outlived their functionality,” he writes. “Now, in a time of endless war, heedless consumption, and great social stratification, all bets are off.” Also referenced in the article is “warcore,” a term first used by Vogue writer Steff Yotka to identify “the escalation of military chic to ‘tactical’ fashion.” But in the case of MilSim, “warcore” isn’t only an aesthetic language. For better or for worse, it’s something more. It’s community; it’s identity.

After November 2016, it was normal to see Op-Ed writers warning that the on- and offline culture wars might soon tip over into a second American civil war. A recent essay by Medium contributing editor Aaron Gell tracks the intersection of Airsoft and the new political climate. He travels to Roosevelt, Oklahoma – home to one of American Military Simulation’s most grandiose make-believe battlefields – to spend a weekend in the trenches among die-hard Airsoft players. Many of those he met described the Airsoft community, ironically, as a “safe space,” and a place of refuge. “I just come here to BS with my buddies and sling some plastic,” Kaid Yates, an Airsoft Commander, tells Gell. “Sometimes you’re a meat shield, and sometimes you’re just laying down hate, but either way, it’s a chance to play dress-up and get away from your regular life. Occasionally, you’ll get somebody here who is extreme in their views, but they tend to get pushed out.” Gell’s experience suggested those he played alongside saw no difficulty in separating life and fantasy. “I mean, it’s guys shooting each other with plastic BBs,” another participant, Ron Mexico, points out to Gell. “I guarantee nobody’s ever gotten laid after an Airsoft game.”

The optics are undeniably visceral. After all, this is a game anchored around the idea that strategized killing is “heroic,” and that you can “kill” without being held to account. In some ways, the game looks and reads much like the Stanford Prison Experiment – players, at times, appear to lose themselves in their characters and start to trip on an overdose of patriarchal power. But perhaps the journey from immersion to reflection becomes an exercise in contemplating real-world outcomes without the threat of real-world violence. This is the view held by artist Ed Fornieles, whose fantastical study of hierarchical masculinity emerged as a body of work entitled “The Cell,” which featured in the sixth Athens Biennale in 2018. In a recent episode of the podcast “New Models,” the show’s hosts Carly Busta, Daniel Keller, and Lil Internet, teamed up with Fornieles to discuss the work, which “documents a live-action role-play around the narrative of an all-male, alt-right gamer group.” Despite the dark subject matter, Fornieles is convinced that the actions and behaviors observed throughout the study were “more aesthetically violent, than physical.”

Throughout the episode, Fornieles is asked a lot about patriarchal hierarchy and violence, but urges listeners to pay attention to the speculative construction of what he deems to be a “modern framing of masculinity today” – particularly among 4/8chan user groups, as well as “far more aggressive groups, pushing a very specific idea of male identity.” Fornieles suggests that a lot of traditional, “self-betterment” ideologies were borne out of “4chan’s recent radical shift to the right.” A large chunk of what we laugh at, read, discover, and identify with online can be attributed to 4chan: it gave birth to meme culture, most of our shorthand type, and the hacktivist group Anonymous. Perhaps asking whether MilSim is a breeding ground for toxic masculinity would be asking the wrong question. With Airsoft, as with anonymous message boards, there’s a risk that a cesspit of trad-masc ideologies might emerge, but to flag them purely as enabler might lead us even further from the source.

To enquire a little further, 032c sat down with Anton Gottlob, a German photographer and former Airsoft player. After a couple of failed attempts to get into the military, Gottlob set off for New York, where he assisted photographer Martin Schoeller, before moving to London where he worked for Juergen Teller. In his new series, “Friendly Fire,” Gottlob tails Gen-Z teens in Siegen, western Germany, young men and women who spend days at a time in military-grade apparel, running around with air rifles, smoking shisha, and listening to gabber techno.

At what point did you decide you wanted to photograph Airsoft?

I used to play it myself, but on a really low level. Back then it was just my friends and me shooting at each other in the nearby forest, which was super illegal. Now they have legit arenas and privatized battlefields. After I moved back from NYC — all I wanted to do was take pictures, and I was really interested in the idea of going back and documenting Airsoft. Through a friend of mine, I got in contact with a group of professional Airsoft players and was incredibly intrigued. So one weekend they hooked me up with access to one of their events hosted at a privatized German air-raid bunker. And that was that.

Some of the portraits feel very intimate — how did you earn the trust of these guys?

I put a lot of effort into making them understand that I know what they’re doing and I’m sincerely interested, and want to photograph it. We were talking about the pros and cons of the M16 versus the M4 and so on. So, the entire day before was just hanging out and getting on a level. At first, they were all quite skeptical, but the location was just amazing, so I asked, “Why not stand next to the flowers?” The really ironic thing was the turquoise colored background. Obviously, they would have preferred a black background. And it was actually really lucky, because the U.S. Army actually uses a bright blue background for their official soldier portraits. So I printed them out as proof that the blue is actually legit — perfect.

Did you find yourself sincerely getting along with them?

I did get along with them, and they were all really nice. The organizer I knew quite well because we used to drive to these festivals together. It was more a study and more a document – to find out what it is they’re there for, and I still find that difficult to define. An interest in danger, minus the risk. Some of these people have helicopters, jeeps, tanks – you name it. It’s a huge community: it’s by no means a niche. It’s not like three awkward guys just showing up in the woods. Before you play, you have to get your gun measured for the power. There are referees and observers making sure that when someone gets hit that they actually go down. It’s highly organized. You pay entry and everything – kind of like a music festival. The locations are crazy – like, people play in old airports, so there’s tons of money in it.

Did you have any preconceived ideas of the series before you started it?

I barely had any idea. I knew it could be amazing. I had an idea, roughly of what I wanted to photograph. Like, with the blue background. But I mean, I had no idea about the location, or the people. I just rocked up with my background and asked whether it’s cool to take some pictures. There was this one kid who really wanted a picture with his father; arm in arm. They really wanted their family picture taken, because it’s an iconic event. I didn’t spend hours researching. It was more spontaneous.

An affinity with violence among teens has been on the up since the dawn of video games — how do you think activities like this skew ideas of violence among young people?

Playing it doesn’t really make you more aggressive. It makes you fascinated with specs and tactics, but not necessarily violence. Everyone who plays it is exhausted afterwards. You’re running around with 25kg worth of gear on your back! These events aren’t really violent. There’s no blood. You’re running around, which makes it more like a sporting event. It does make you more interested in war, though. It made me want to watch more documentaries about war. It makes you realize more what war is about. At some point in my young adult life, I wanted to be in the army myself! Whether that was drawn from playing a game, or something else, I don’t know.

GUY CRAMER: Disappear Us Algorithms, Aesthetics, and the Armed Forces