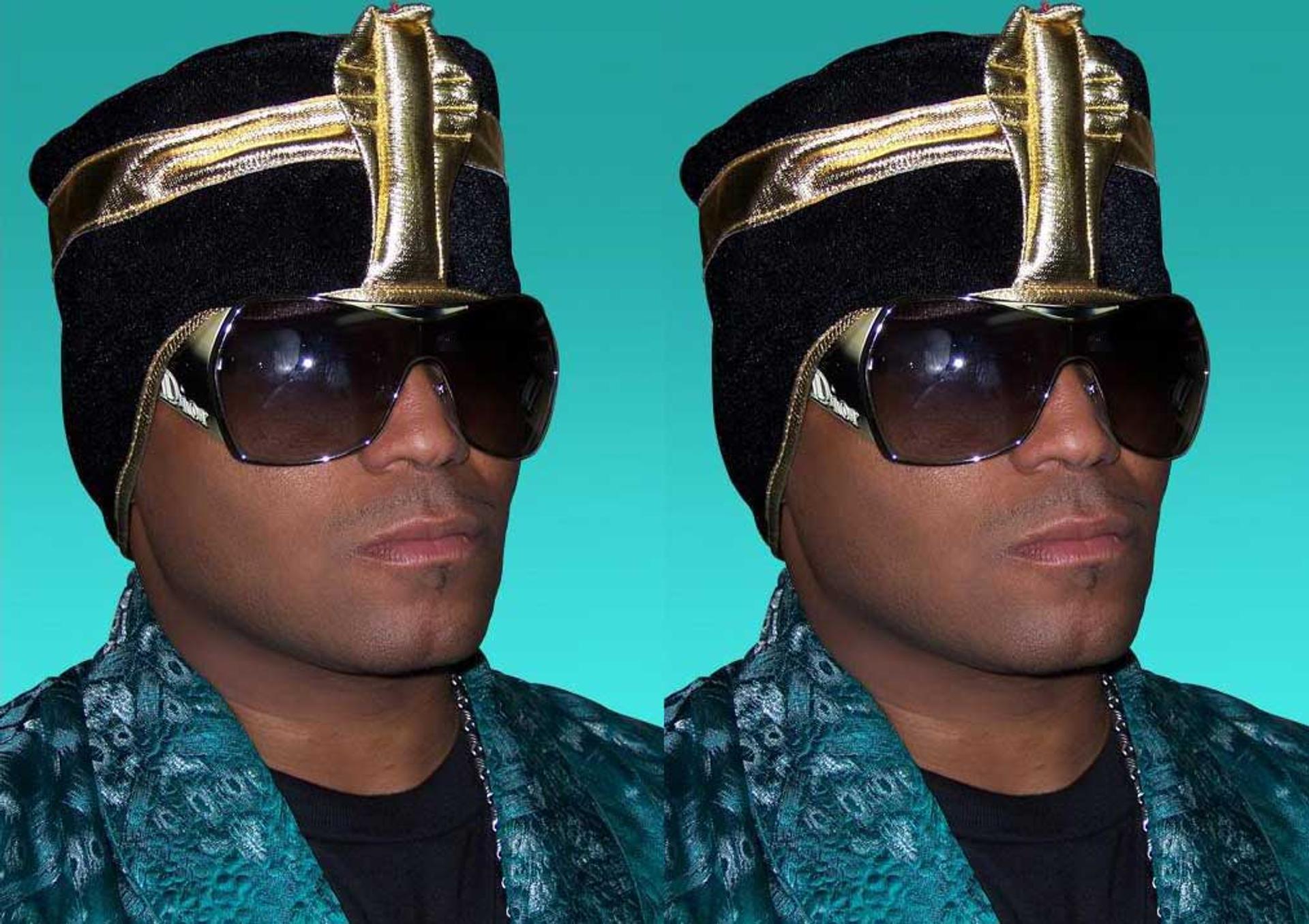 “Our operators are masturbating right now, but your call has been placed in a bucket of stomach fluid and will be attended by a double-talking robot approximately 7,000 years from now.” Dr. Octagynecologist is not available; his intergalactic ecological gynecology practice is closed. There was an emergency call from planet Earth: very big turtles are waiting to be extracted from some very small uteruses, and the planet’s last surviving trees must be saved. “Using material for Christmas, papers get printed/ trees may get extinct like elephants.” An old, dear friend of the Doctor’s is suffering from a medical condition: “Don’t Worry Mz. Pop Music,” he comforts her through his space walkie-talkie while landing on the third planet, “I know you haven’t been well lately, but you’ve been stabilized for a long time.”

Dr. Octagynecologist, known in the yellow pages as Dr. Octagon, was born on Jupiter in the year 4,000 AD. Whenever a lost soul dials his number, he flies back from the future into the past with his bio-cybernetic spaceship. His first encounter with Earth took place in 1996 with the hip-hop album Dr. Octagon, through the rhymes of metaphysically and extraterrestrially gifted New York rapper Kool Keith. He and his crew, the Ultramagnetic MCs, had already sent out post-humanistic signals into interstellar space in the 1980s, when their completely electrolyzed break beats successfully left Earth music in the dust for good. From the future, Dr. Octagon could see that the Ultramagnetic MCs were far ahead of their time, and appointed Kool Keith as his official intergalactic gynecologist-psychic. Kool Keith then became one with the octophrenic identity of Dr. Octagon and can now cruise through the solar systems in his bio-cybernetic spaceship, relieving the suffering of their afflictions and pursuing his studies in galacto-ethno-zoology in between surgeries.

Deep down, Dr. Octagon is a xeno-biologist, an explorer of strange life forms. “Space is my place,” he says, quoting his extraterrestrial friend Sun Ra. Everyone on earth is thus alien to him; he is unable to separate men – “gorillas in their pick-up trucks” – from animals, dialectic animals though they are: “Ants / terrible looking / walking side to side like a work farm / some mean no harm / with the fire department, ring the alarm / ants work for America / some work for Saddam.”

Kool Keith’s most recent Dr. Octagon incarnation, The Return of Dr. Octagon, catalogues his latest xeno-biological studies. Since 1999, when he was attacked and defeated by the evil Dr. Dooom (another Kool Keith alias, another classic album), Octagon has been mistakenly presumed dead. But the good Doctor is very much alive. To confuse matters more, Kool Keith has simultaneously released a second new album under the name Mr. Nogatco – that’s “Octagon” backwards – and it’s a no less straightforward collection in its otherworldly obsessions (the accompanying video footage includes an alien autopsy). Still with us? Then maybe you should also consider Project Polaroid. This third essential 2006 release from Kool Keith confusingly mines very similar sonic terrain to the seminal original Dr. Octagon album.

“Ants / terrible looking / walking side to side like a work farm / some mean no harm / with the fire department, ring the alarm / ants work for America / some work for Saddam.”

The xeno-biological raps on the first Dr. Octagon records had minimalistic foundations, cooked up on mere human vinyl by spaceman scratch0-master Q-Bert like wet Earth bacon in an intergalactic frying pan. The Return of Dr. Octagon has replaced that minimalism to form an astral gesamtkunstwerk of against-the-flow xeno-musicological sound and rhythm, mixed into infinitely shape-changing constellations by the Berlin-based production trio One Watt Sun (Ben Green, Simon Walbrook, and John Lidland). Like Sisyphus, the listener can admire the worker ant via an electronscan microphone as he orbits the Earth on the symphonic wings of Egyptian singer Om Kalsoum into the bird’s eye view of world history. As one song groans under a lamenting arabesque, and crackling sequencer sounds leak from an Africa-Bambaataa-Memorial-Box, hermetically sealed for over three decades: welcome to Planet Rock.

Intergalactic space is full of hip-hop producers – namely, Neptunes and Timbaland – who may well have spent their youth watching Star Trek reruns and learning Vulcan vocabulary, only to then pimp the strangeness of the mainstream fringe into marketable sounds for sci-fi fans. Dr. Octagon is different; he is not science fiction, but the future itself.

“I don’t even feel like I’m a human being any more,” Kool Keith has said of his relationship with himself. “I feel I could put myself in the place of a mammal or an animal.” The rapper is on a quest for a connection between the species; he’s seeking a tree he can hug, an alien uterus to crawl into. As Kodwo Eshun once said, “It’s not schizophrenia nor quadrophrenia but octophrenia.” Dr. Octagon and Kool Keith are neither one being, nor two, but many – hopefully they are finally numerous enough to complete their mission to save everyone that needs to be saved: the uterus turtles, the trees, and us earthlings.

Online and Unmoored: In Search of PRINCESS NOKIA