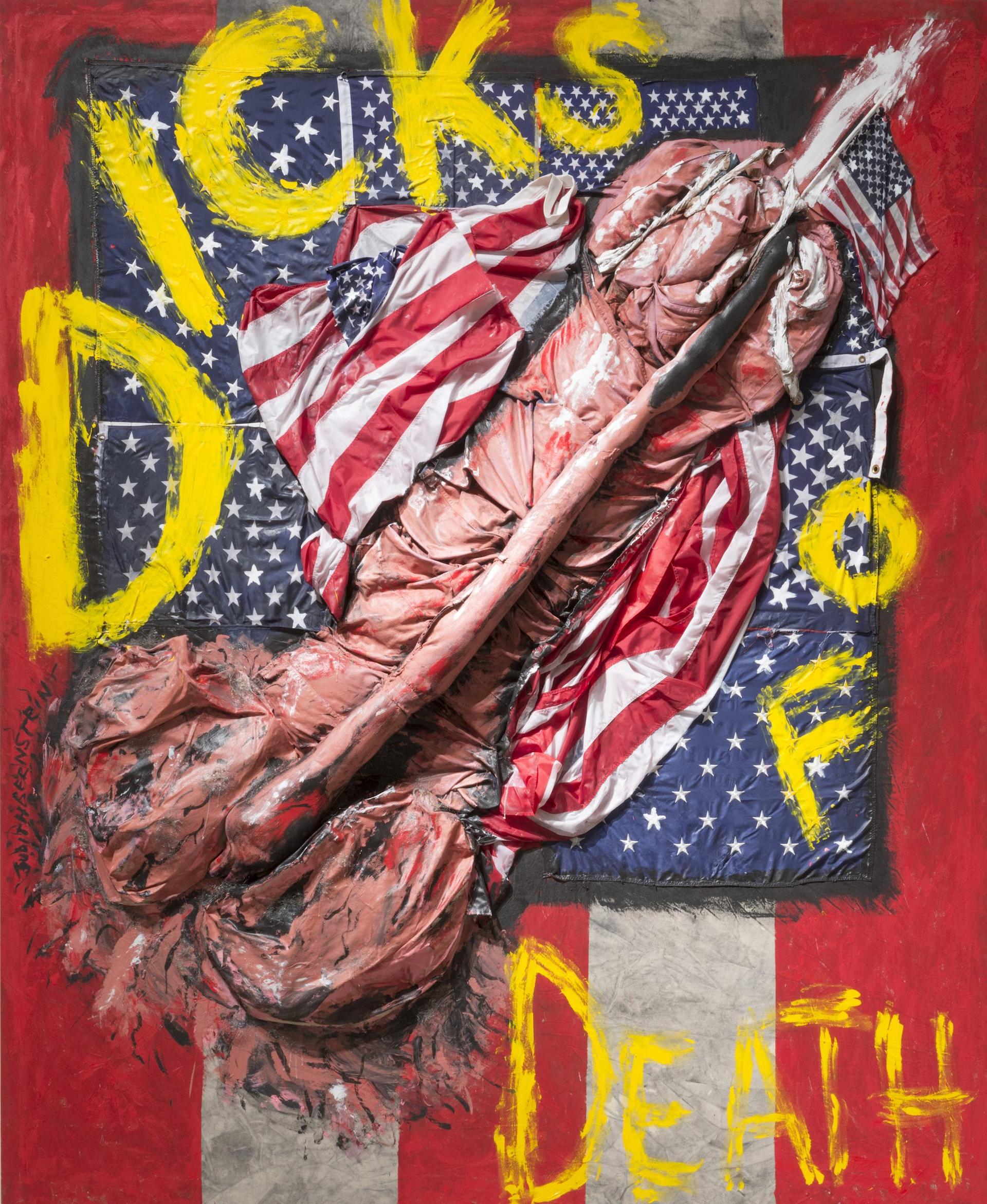 Dicks are everywhere. They have dominated architecture from ancient columns to modernist skyscrapers, are symbolized by lightsabers in sci-fi movies, and are writhing in the chained up deodorant bottle of a Rexona ad – “Twice the power, it won’t let you down.” But for all the phallic symbolism that surrounds us in our everyday lives, intended to manipulate our desire for a product, a protagonist, a partner, or property, the real thing is rarely exposed to the public eye. For something pulsating with so much projective force, tied so closely to ego and status, the dick also holds the power to crush self-esteem. The penis is integral to many male neuroses.

74 year old artist Judith Bernstein has no qualms about her cocks. As she has noted many times, hers are bigger anyway. Her most famous work, entitled Horizontal, measures 9 x 26 feet and is a hybrid between a dick and a screw, two pieces of hardware that perform the same function: screwing. But when Horizontal was first shown to the world in 1973, the only person who got screwed was Bernstein. The curators censored the work out of the show and sent her off into art historical oblivion for the next few decades. In alignment with the fate of many artists – who happened to be women – Bernstein took on teaching gigs to pay the bills and kept producing work from her home studio. In footage of her painting in her studio, Bernstein radiates with joy. The pleasure with which she paints her massive, fragile, veiny cocks translates directly to the viewer. It debunks the widespread myth of the feminist as an ultra-earnest killjoy and instead lets her work appear playful, even tender.

Dicks of Death surveys Bernstein’s decades of dick paintings. It is the ultimate book of dick pics, showcasing a body of work that is as pleasurable as it is intensely political. Bernstein used the image of the phallus to protest the Vietnam War in her early work, succinctly lampooning the violentand gendered nature of American patriotism. Over the decades, her approach to dicks has changed concurrently with that of society as a whole. For example, her more recent works – which also include cunt paintings – use genitalia as a stand-in for questions surrounding identity. With discrimination and violence based on gender and sexuality still rampant, 2016 does however offer more visibility to those who fall outside the magic circle of cis, straight, white men who have dominated all industries in the Western world and its colonies for centuries – except for housework and emotional labor. People know what “cis” means now. There is a budding understanding that the gender binary might be a faulty concept, that a spectrum of identity positions to choose from might be liberating for us as a people.

Bernstein possesses the defining qualities of those whom we call progressive: a thirst for knowledge, a willingness to learn. She might have started out painting dicks as a critique of pervasive machismo, masculine aggression, and warfare, but her work as a whole is of a more generous nature. Knowing that genitals do not determine gender, the collective struggle for equality looks quite different today. Bernstein’s inclination to never not complicate things is what keeps her practice relevant. Her work seems to wink at its beholder: This could be us, if only you were playing.