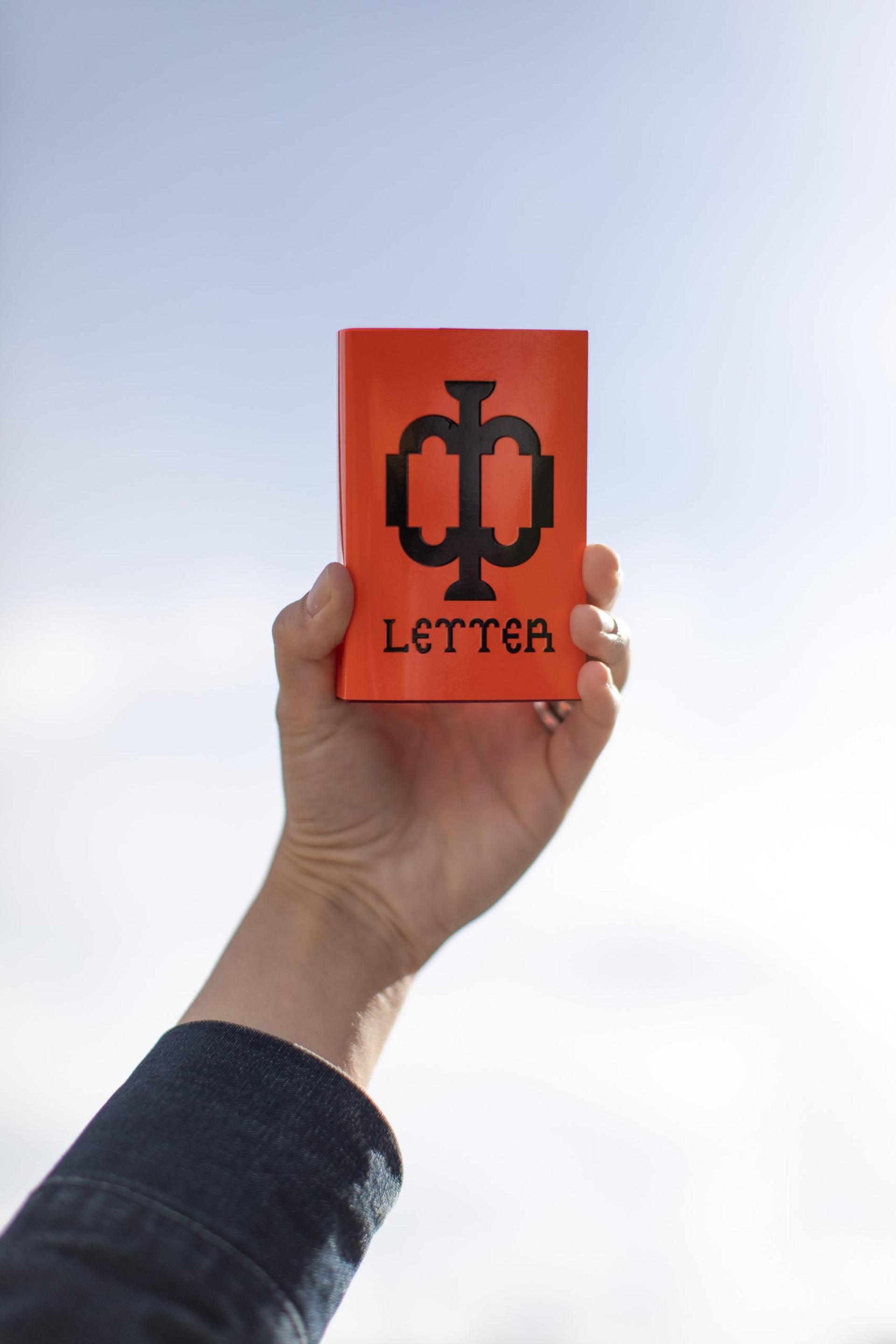 Books by ISOLARII: “Islands from which to view the world anew.”

In a year that felt like it was endlessly buffering, an intriguing new press called isolarii came into focus with three gorgeously designed books that can be held in the palm of your hand. Despite their diminutive size, each of the publications has been a revelation. The first, Salmon: A Red Herring by the artistic duo Cooking Sections, is an examination of color referred to as “salmon” that explores the ways in which what seems natural – the pink-orange hue of the fish’s flesh – is in fact largely the result of human intervention.

The second book, F Letter, is an anthology of contemporary feminist poetry bringing together some of the most radical voices of Russian literature today. And then there’s the third book, Purple Perilla by the Chinese fiction writer Can Xue, which is a fabulist depiction of three separate characters interacting with the unknowable world around them. Alone, each book was immensely captivating, relevant, and necessary. But the sequence was also startling, making sense only like a dream makes sense: true, but on an angle. As I’ve read and re-read them, I’ve strongly desired some sort of clarity – who hasn’t this past year? I wanted to know: where are we going, where are we now, and what does it all mean? Recently, I had the chance to chat with actor India Ennenga and editor Sebastian Clark, publishers of isolarii, to discuss the origins of the project and what “islands” they will take us to next.

Shane Anderson: On a recent Instagram story, you posted a series of posters from David Bowie’s ISOLAR II tour. Is this where the name originates?

India Ennenga: It’s a total coincidence. When we signed up for Instagram, we put in “isolarii” – and, lo and behold, the handle was taken by a David Bowie fan account. The name comes from the Venetian Renaissance genre, which literally means “island books.”

Sebastian Clark: isolarii were these encyclopedic tomes of real and imaginary islands – a kind of map of emerging thought. Over time, they lost out to the novel. But they left a mark, a cultural fixation on the island. From Thomas More, early on, to William Morris, Georges Perec, and Agnès Varda. Maybe Bowie too.

IE: These were people who practiced geography as “earth writing” – they understood that the way the earth is written about influences the way it’s inhabited, and that this is a necessary task. We’re bringing together the people doing that now.

The books are all very much addressing the problems of today – so far, the books have addressed the environment, gender politics, and our interaction with the world. Was this by design?

IE: It’s by virtue of the fact that our authors are all engaged in the reality of the world and its problems, but, more than that, they’re reimagining it poetically.

SC: We don’t make any mandates for the commissions – we’re just giving people a format in which to work. It’s obvious we need a new internationalism, but it’s not going to be politicians that get us there. We’re publishing the people we think will.

The format of the books is also very specific.

SC: They’re these small, essential things in your pocket. Often the seeds of larger public projects, projects being built outside the white cubes of galleries. And the opposite of the vanity projects that are coffee table books, or the mindless feeds of the iPhone.

The island books of the Renaissance collected islands in a single volume – which itself feels very colonial – whereas each of the isolarii island books exists as a stand-alone piece.

IE: We were inspired by Édouard Glissant and his thinking about islands in an archipelago – his insistence that we can share a history but maintain our autonomy and individuality. Archipelagic thinking is about being in relation to and separate from. It also suggests that those things don’t need to be in tension.

SC: While we’re influenced by philosophers like Glissant and Aimé Césaire, or other people who have thought about islands – Sloterdijk, Arendt, Serres – you need to move away from philosophy to some degree to build a media organization. You can really only think about things in narrative terms, not philosophical ones. It’s no use performing theory.

“It’s obvious we need a new internationalism, but it’s not going to be politicians that get us there. We’re publishing the people we think will.”

The colophon for isolarii, which can be found at the back of each book, reads: “Islands from which to view the world anew.” What does that mean, concretely?

IE: That each book is a perspectival shift. We will cross disciplines and continents, but, every two months, we will bring you to a place that turns reality on its head – and offers a new approach to inhabiting the world.

SC: When everything is governed by networked databases, all a book can really be is an island. What distinguishes islands are not palm fronds and sandy beaches. They are sites of exception where time and space function differently. They are projects in autonomy that can rewire our relationship to the world at large.

So, you’re trying to rewire the narratives we live with and in?

SC: There’s this discourse now that laments the “loss of agency” – of the ability of people to lead the lives they want to lead. For me, this is about equipping ourselves with the right kinds of narratives and narrative structures.

IE: The history of America, for instance, is bound up with a narrative form by which people draw a line in the sand and pick a side to be on, and reinforce their positions ideologically. This is the case throughout so many genres: the Western, the noir, even the romantic comedy. Occasionally that line is redrawn – by, say, Trump – and there’s some jostling, rearrangement of positions, but it’s still “us vs. them.” And we’re all the victim of that.

Well, I don’t know if that’s totally true about Westerns. I’m thinking here of John Ford’s The Searchers, which is highly ambiguous – also morally – or even the films of Sam Peckinpah.

IE: But that’s precisely what’s so problematic about American narratives: even though morality is ambiguous, a side still needs to be chosen. We choose sides despite morality. In The Searchers even, we know that the Native Americans are the victims to all that’s represented by John Wayne’s bully, but we’re still encouraged to side with Wayne anyway. Trump is the perfect expression of the “outlaw” type, and that’s why I think he’s been so convincing to so many people. We’re primed by our narratives to sideline morality and stick loyally to our “pick.” Now, a film of our book Salmon: A Red Herring – that’s something I’d be into. No hero or anti-hero, no outlaws, just a complex web.

“You need to move away from philosophy to some degree to build a media organization.”

The first three books you’ve published are very divergent in the worlds that emanate from them in terms of style, genre, and country of origin. What unites them?

IE: They’re divergent in theme but not intention – each is a world that reorients us in our own. This is what I mean by perspectival shift. With Salmon, the question was: how can we look at history and politics through color as opposed to via human actors? With F Letter, it was: how can we understand the function of poetry as revolutionary speech? And then Can Xue’s fiction questions how we can rework the human relationship to nature and the unknown.

SC: So much of publishing is about establishing a rhythm, a beat – and like any good song, you can’t just hit one note. Whatever comes through your letterbox, it will make you see the world differently and be a point of relief.

By reviving a Renaissance tradition and also placing yourself in line with avant-garde figures like Perec, I can’t help but think that conservation is important to the project. Is the historical avant-garde also a reference?

SC: The avant-garde of the 20th century was an expression of oil. The drive to move forward, innovate, and blindly advance into the future. Obviously that notion is dead, but there’s nevertheless a group of artists working today who are reconsidering our relationship to time and space – just as the avant-garde did before – and I would call them “radical preservationists.” The people who are challenging conservatism’s grasp on what it means to conserve.

IE: In a very tangible way. As you see in F Letter, Galina Rymbu and associated poets are building something in Russia that is very real. They’re organizing and creating a place for free speech that hasn’t been done to this extent – but which demanded to be done – since the fall of the Berlin Wall. With Can Xue, her worlds are fantastical, but if you assume the role she gives you as a reader, it’s a subjectivity that you could live your life by.

isolarii is then a space for real, progressive practices to interact. This is also clear in the forewords, which are written by theorists, novelists, artists, and curators. What’s fascinating is that the forewords sometimes don’t even directly address the book you’re going to read.

IE: Forewords are supposed to supply you with what is relevant. Typically, that’s interpreted as dry biographical data with some fluff praise. But that’s not actually helpful. Ours are responses to the work itself, and supply useful entry points – whether they address the text directly or not. For example, the next foreword for the Can Xue book will be by the musician Warren Ellis – a soundtrack.

SC: Each of these books has a pre-established niche, but the forewords also help introduce the book to different audiences as we journey from one niche to the next.

Your job as a publisher is then to strengthen the networks between these various fields. You’re ferry drivers between islands!

IE: You’re right! To publish is to form a public around a work. This is why we publish the books sequentially and by subscription, to build an audience who, like our authors, are willing to take leaps of faith, to constantly recalibrate how they think.

SC: After Salmon, we received enthusiastic responses from salmon fishermen as far afield as Chile, Alaska, and Tasmania. Our task was, then, to deliver a work of Russian feminism that moved them equally. This, I think, is part of a broader task we all share.

IE: It’s also allowed us to do away with some publishing procedures that seem outmoded – that really don’t serve readers or publishers. Like blurbs on the back cover.

But blurbs do serve readers. I was a bookseller for a long time, and I can’t tell you the number of people who have bought books because of what was on the back cover and who endorsed it.

IE: And maybe it’s because we’re outsiders to the traditional publishing world, but my response is: we don’t need blurbs to sell books. We need to change the way books are sold!

What can we expect from the next islands on the journey?

SC: We’re taking head-on what India said about America. It’s been said that America is about the conquering of imagery over writing, space over time, and happiness over the complexity of life. The next book we’re publishing, Street Cop by Robert Coover and Art Spiegelman, is an exciting complication of this. Also on the horizon: a work by Junya Ishigami that takes architecture to its furthest limits.

“Societies that are beholden to chronological time are immoral.” An interview with MARIA TUMARKIN

“We trust our friends. And we trust ourselves.” ELVIA WILK on Berlin’s Cultural Class, Grief, and her Debut Novel