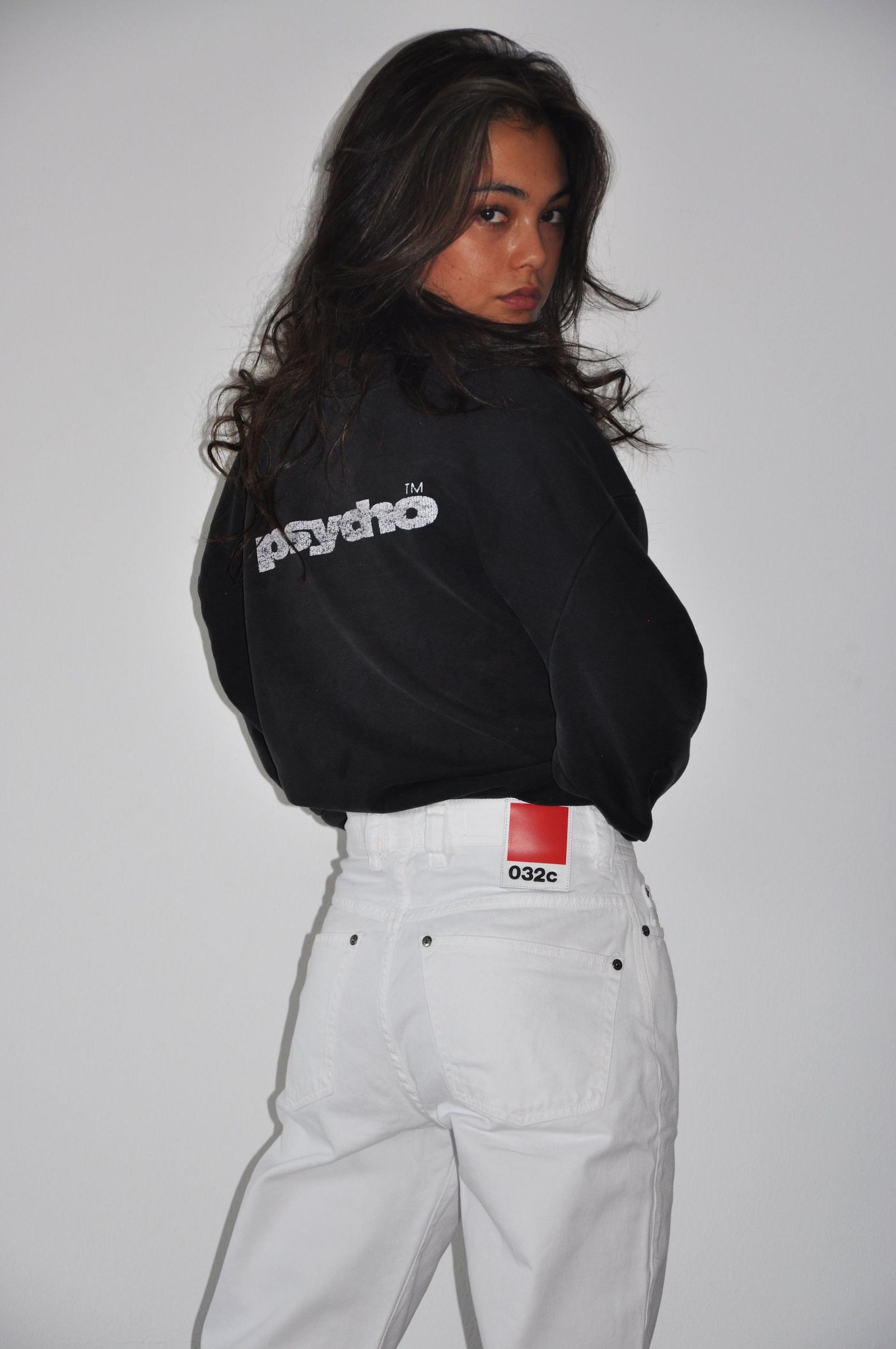 Nico Huzella is a California-bred, New York based singer and composer emerging onto the music scene with haunting vocals and ethereal instrumentals. After seeing her play at Berlin’s China Club during the Gucci and 032c hosted dinner for the REFERENCE BERLIN festival last month, we couldn’t wait to speak to her – or see her in our denim.

When did you start playing music?

I started playing classical piano at eight. I studied on and off for five years and then moved into a more writing concentrated practice. I taught myself guitar at 12 and found a lot of freedom in that practice being feeling-based as opposed to theory-based. Singing always came naturally – I never studied it.

Who were the first major artistic influences in your life?

I was a huge classic/prog rock nerd. So my earliest influences must have been the Beatles, Pink Floyd, Zeppelin, King Crimson, Genesis, etc. I usually didn’t find the classical music I had to play all that interesting – which isn’t too unusual for a kid – but I remember being very obsessed with Chopin and Ryuichi Sakamoto!

You’re from California – is that a big part of your work? The coastal aesthetic, the golden hour, the musical history there?

Somewhat, though I probably would’ve ended up listening to the same music wherever I was. However, I imagine the time I spent in China as a kid played a huge part in the international influence in my music now.

My mom is from Chongqing, so I spent a lot of time there growing up and I imagine that’s reintegrated into my music. I have this instrument called the Guzheng, which is a Chinese plucked string instrument that is something like 2,500 years old. I’m obsessed. It sounds like a darker and more resonant harp of some sort, and it’s crazy for sampling. One day I’ll actually learn how to play it.

You recently moved to New York – how has your practice evolved as a result?

I quit conservatory after a year in New York, which was apparently the right decision because after that I had a crazy surge of creativity and have been writing/producing almost every day since.

What made you decide to quit?

Looking back now, I think I just needed complete freedom. I had a real aversion to learning music in that sort of mechanized way – I found it to be very limiting. I think real teachers and mentors will provide kids with that freedom, because in the end interests and passions have a mind of their own and they will always manifest in whatever way they see fit. In mean, how is someone supposed to teach you how to be obsessed with something? Also, maybe it was because I’m not so good at what musicians are traditionally supposed to be good at, like reading music, theory, and improvisation. I really just like the process to be as natural as possible.

If you had to label your musical style, how would you describe it?

I’m frequently asked this question and I wish I could answer it more precisely. I really don’t know! It’s definitely evolved a lot over the years. It started off as pretty folk-oriented, singer-songwriter stuff, then I moved into composing and arranging. Now I think I’ve naturally combined the two, along with my newfound obsession with synths and producing electronic music.

What about your personal style? What do you find inspiring?

Anyone that looks like they aren’t trying to be anyone else is inspiring. I have honestly never really cared about what I wear and I think that shows. I am starting to appreciate “style” a little more as I grow into myself and meet new people that put more of an emphasis on it.

Is there anyone in particular whose style you admire for the reasons to say?

Performing live vs. recording or playing privately: which do you prefer? Do you get a thrill out of singing in front of an audience?

I am a pretty private person, so sharing my work in public or even private settings has always been difficult. I am just learning how to share my music and it feels good, because it makes music more like a conversation rather than a personal experience. I suffer from a bit of stage fright, so I wouldn’t say that I experience the thrill of performing – yet. But it gets easier every time and it’s almost fun.

Do you have any big fears or phobias?

Do you have any dream collaborators? Musicians or otherwise?

A lot! But the first people that come to mind are Ryuichi Sakamoto and Brian Eno.

Now, a classic 032c question: are you a dog person or a cat person?