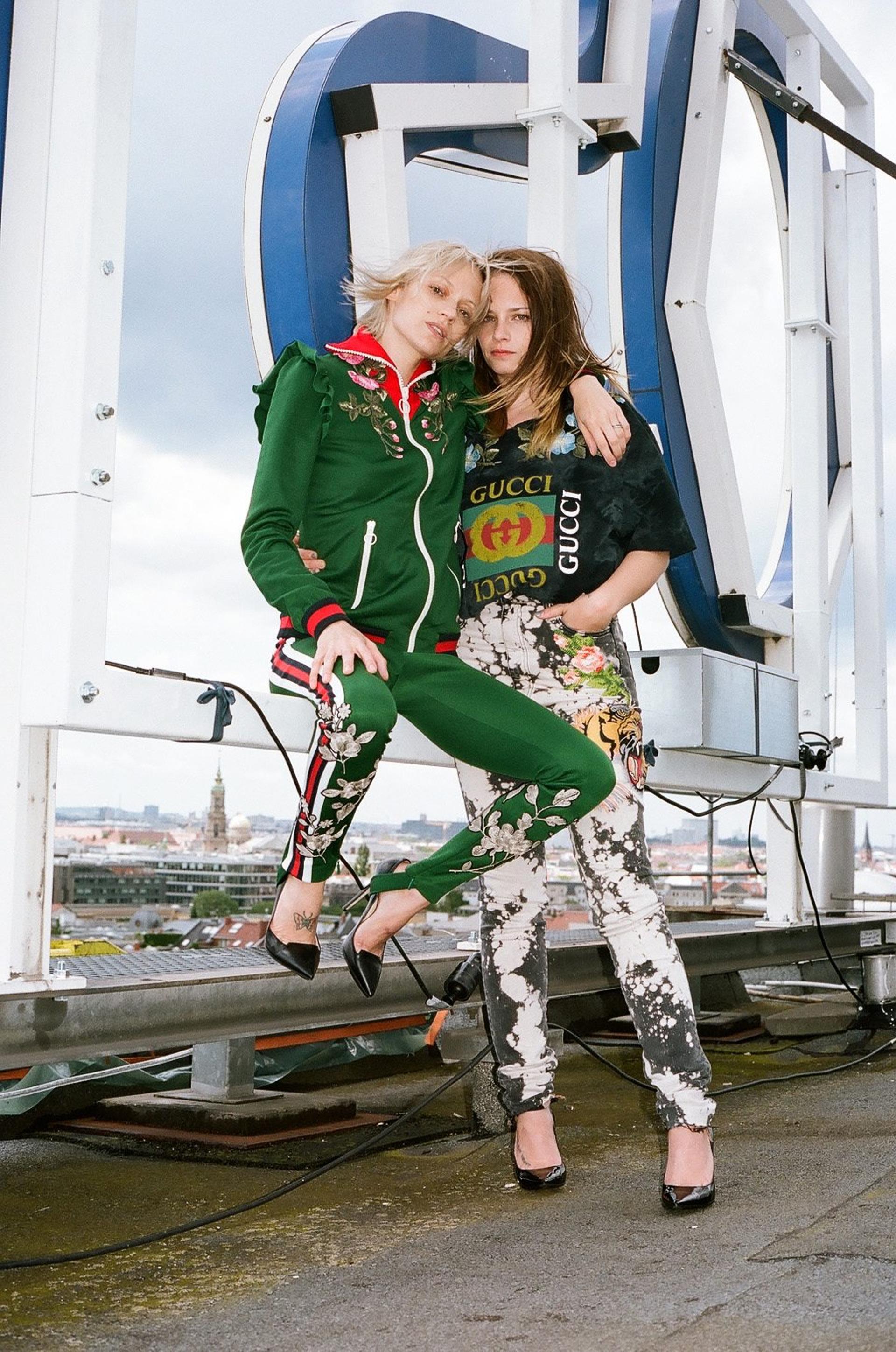 In an undoubtedly shameless Zoolander moment, 032c stormed the roof of the Volksbühne — the home of East German radical dramaturgy— just days before its iconic “OST” sign was taken down, dressed in head-to-toe Gucci. The editorial was a celebration of the premiere of Axolotl Overkill, Helene Hegemann’s new film, featuring its stars Mavie Hörbiger and Jasna Fritzi Bauer. 032c has followed Hegemann’s work closely over the years, profiling her in Issue 24 and inviting her to write a short story for our dossier from Issue 30. Hegemann’s close relationship to the Volksbühne manifested itself in her early years through her father, Carl Hegemann, a former dramaturg of the institution. While there has been much derision over the future of the theater, the removal of the sign is an undeniable symbol of the end an era, and we salute its legacy.

“I guess we all want the same – that there are bangs and explosions and you feel yourself,” actress Mavie Hörbiger considers. Ten minutes earlier, Hörbiger and fellow actress Jasna Fritzi Bauer were climbing the Volksbühne’s rooftop and racing through the nearby U-Bahn cars clad in full Gucci.

Hörbiger and Bauer co-star in the film Axolotl Overkill – a movie based on Germany’s enfant terrible Helene Hegemann’s 2010 novel Axolotl Roadkill. In the film, Bauer takes on the character of Mifti, an adolescent girl who aimlessly wanders Berlin after her mother’s death and clings to any experience flung at her in her post-traumatized and neglected state. While at school, Mifti befriends Ophelia, Hörbiger’s role, a seemingly bi-polar actress who is working off her community service in the high school’s canteen. Together, they navigate Berlin’s boiling points for the young, rich, or famous: Grill Royale, Borchardt, Kingsize, and even Arno Brandlhuber’s Anti-Villa, which provides the set for Mifti’s father’s home and their deserted relationship. The nightlife adventures hint at the hypocrisy that this “scene” inhabits – the occasional excess and faux-carefree ragers followed by the same crowd fleeing back into their conformist and settled bourgeoisie. Bauer herself is cautious to relate to this milieu: “I don’t go anywhere. I’m just at home. I only move around in my neighbourhood.” The harshness of Mifti’s reality is countered by Hegemann’s witty dialogue and the character’s laissez-faire willingness to accept the most absurd of situations. The sadness is so well masked by the bombast and fanfare, that sometimes, one forgets it is supposed to be there. But, as Hörbiger points out: “It’s not a documentary. It’s a fairytale.”

Helene Hegemann: An Innocent Mind Has No Fear