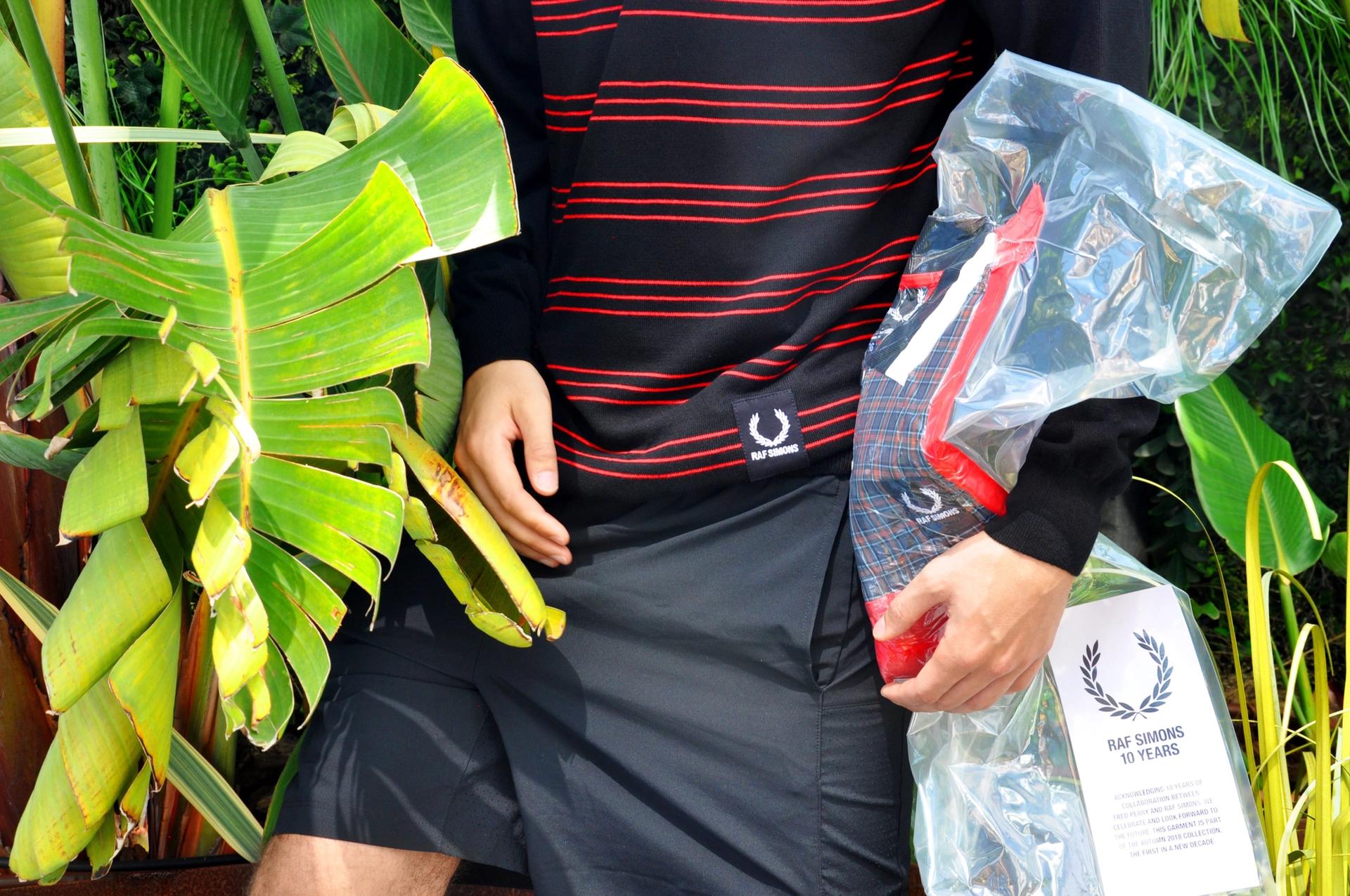 Belgian designer Raf Simons has been designing special collections with the Fred Perry label for a decade now. To commemorate the 10th anniversary this summer, the British tennis shirt giant dropped 100 archival pieces, vacuum-packed for posterity, in locations around the world. Each destination was selected for its budding subcultures – a seasonal homage to ten years of collaboration, and a celebration of the future of cultural experimentation.
Honoring the Fred Perry x Raf Simons Autumn 2018 collection – the “first in a new decade” – the latest looks were vacuum-packed, too. When they arrived at the 032c Workshop, we knew exactly what to do: take them to the rave Mecca Ibiza earlier this week. 032c Fashion Director Marc Goehring field-tested the creations during the festivities on Spain’s vacation island. Of course, they were a breeze to pack and held their own in the pool, but in and out of plastic, the co-branded pieces stay true to the DIY spirit of the Fred Perry brand, and to the experimental versatility Simons is known for.

Apparently, British tennis star Fred Perry invented the sweat band. As the story goes, an Austrian footballer named Tibby Wegner had invested in an anti-perspirant device designed to be worn around the wrist, and approached Perry with the idea in the 1940s. Perry adapted it, and the now ubiquitous accessory was born – popular first on the tennis court, and in subsequent decades, in the street. Wegner and Perry’s next project would take the cake, however: a white knit cotton-piqué short-sleeved shirt, launched at Wimbledon in 1952. Once the garment began to be produced in other colors, it took on a life of its own, becoming popular in the 1960s with instigators of what was arguably the first big fringe movement to emerge on the Eastern side of the Atlantic after the war: Mods. Ever since, the Fred Perry tennis shirt has been adopted as a uniform by various youth- and subcultures in England and globally, its laurel wreath logo an unexpected emblem for originality, individuality, and rebellion.

The Fred Perry x Raf Simons Autumn 2018 collection channels that DIY sensibility into classic Fred Perry shapes, subverting their proportions and materials with oversized cuts, flashes of tartan and color, and high-shine panels reminiscent of the duct tape you might see holding a wallet or steel-toe boots together. Simons is no stranger to subcultures, having launched his own label in the mid-1990s with inflections of punk, gabba, and English New Wave. Simons’ non-conformity makes the designer an appropriate pick for an athleisure brand named for one of the most versatile and polarizing tennis players in the history of the game. (Perry is said to have shouted “Very clevah!” whenever his opponent made a particularly good shot – an example of the “punk” attitude that infuriated other players, and attracted celebrity status off the court.)

As the 100 pieces selected from the Fred Perry x Raf Simons archive continue to appear around the world – so far, the project has gone to Athens, Seoul, Dubai, and Los Angeles, among other cities – photographers Olya Oleinic and Kyle Weeks are on the scene, capturing the garments around the world while fans follow the trip via Fred Perry’s official Instagram. See the journey so far and catch a preview of the fresh collection here, or in real life at Fred Perry shops in Paris on September 6, on September 13 in Munich, or on September 27 in Berlin, where there will be drinks, a DJ set, and a video installation on view from from 5-8pm.