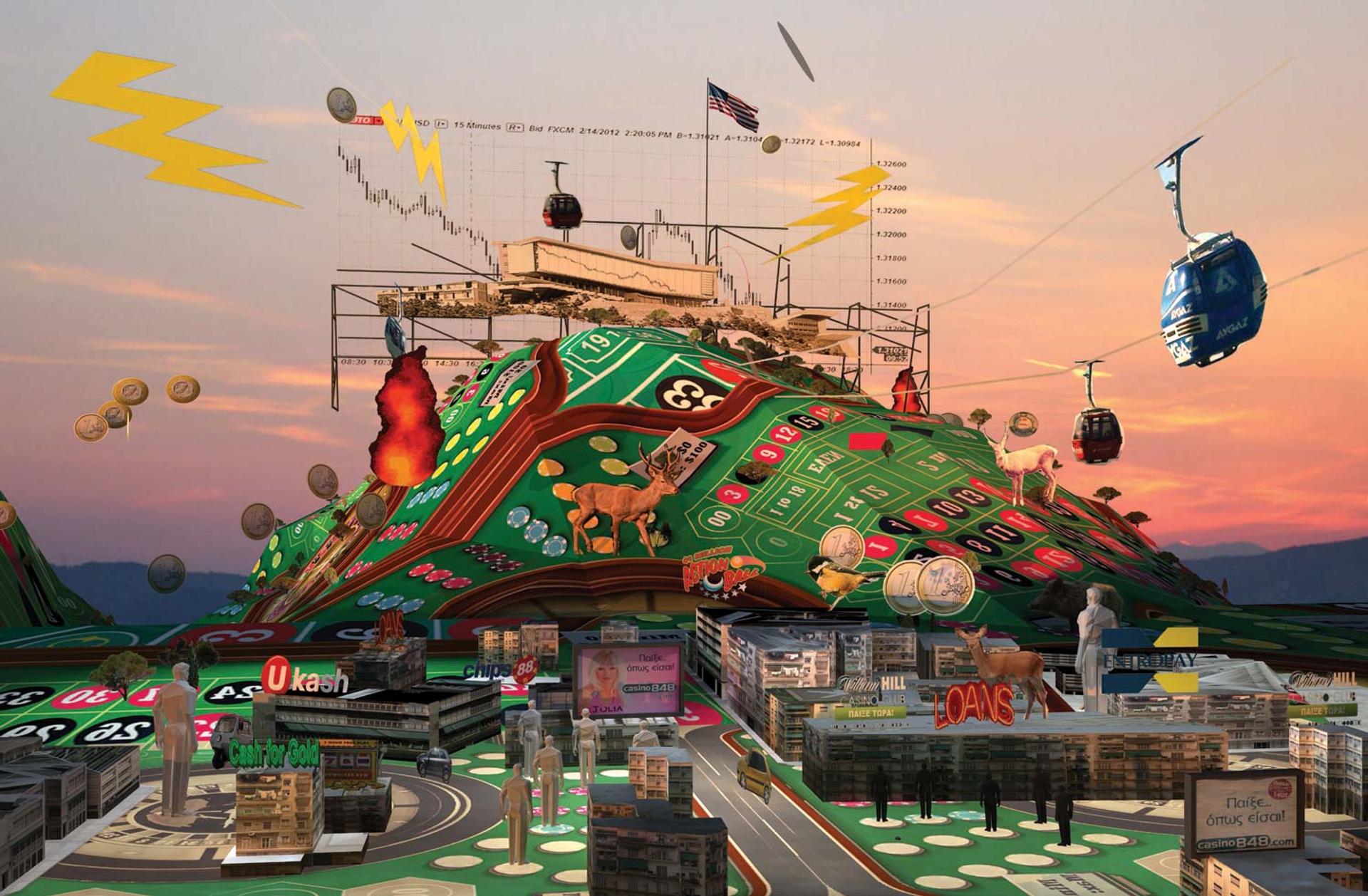 Every End is a Beginning: Architect ANDREAS ANGELIDAKIS Speaks to 032c

“I like buildings but I’m not sure I want to be the one building them. I like them like beaches and mountains and clouds, as part of an extended idea of nature.”

An architect who doesn’t build, ANDREAS ANGELIDAKIS straddles the line between art and architecture. In place of brick and mortar constructions are instead installation and exhibition pieces for the post-digital age, often curated and designed by Angelidakis himself. 032c posed a few questions to the Greek architect on the occasion of his brilliant retrospective solo show at the National Museum of Contemporary Art in Athens.

How has our relationship to architecture and objects changed in recent years?

ANDREAS ANGELIDAKIS: The more we know about how the world works, the less appealing fancy buildings become, mostly because we know the processes that produce them, and the logic behind them. By fancy buildings, I mean those that are designed to capture our fleeting attention, which has become so fleeting that perhaps buildings are not really capable of winning that race. A building takes years to produce, but in our moment it grows old in months, maybe weeks. So buildings and objects really need more interesting back stories to capture our imagination and to fascinate us. I think more and more we have a problem with permanence.

Baudrillard is often quoted in writing about your work—“The scene of history as well as the scene of the everyday emerge in the shadow of history as it is progressively divested of politics. Today the scene and the mirror have given way to a screen and a network. There is no longer any transcendence or depth, but only the immanent surface of operations unfolding, the smooth and functional surface of communication.” Yet Bifo is also referenced in Mia Lundström’s essay in that he argues that poetry is the voice by which we will be able to understand and manage financial crises. Your ongoing fascination with both Pop and Arte Povera play a strong role in your work. Can you explain why these tendencies are important at the moment?

Well I see Pop and Arte Povera as almost opposite movements which led us to ’68, and there is a curious resemblance to today. I don’t know if there will ever be another ’68 moment when the world will change, but on the internet today you see this kind of opposition of the political and the personal, you go on a Twitter feed and images of protests from Gezi Park are followed by a cat that performs a cute trick for somebody’s iPhone. So the internet is becoming the field where these opposing sentiments find common ground, and I’m interested in Baudrillard, because even if he fell out of fashion with academia, I think he was always talking about the internet the way we experience it today. In a way he said those things before their moment had arrived.

How would you explain today’s architectural / design desire in relation to the idea of the cottage economy?

Well the cottage economy is really just the financial model that the internet is providing us. All those little Etsy and Ebay stores or the Airbnb business model just provide people with the opportunity to make their own little cottage corporation. Desire is more tricky – of course it is still the basis for all our consumer habits, but again the internet is turning us into hunters of the next thing that goes viral. The desire behind a new shiny product is somehow different from what makes us click on those “I did this and you won’t believe what happened next” videos. It’s easy to manufacture the old-fashioned desirable object, but much harder to make your object become popular on the internet, because it’s more random. Maybe the cottage economy will offer such a huge variety of stuff to want, so as to make it in the economy of the internet. It’s definitely a transitional moment, and perhaps thats why it’s similar to ’68, though this time the revolutionaries are falling asleep on their iPads.

You’ve written: “What is happening nowadays is a violent mixing.” What do you mean by that and how can we visualize it?

It’s visualized every day on your newsfeed, but I think we just grew into this organically, so maybe we don’t even notice it anymore. And more than just images, I think it happens on an idea level too.

Your project Monument to an Oncoming Disaster—Gate to the Athens Marina proposes a future monument / ruin. How would you distinguish between a monument and a ruin, and what attracts you to both?

That gate was “designed’ to function as an island when the sea level rises, so until then it just reminds us of what could possibly happen. In a way, the ruined state of the project is what it has been designed for, in our present time it would be a ruin in anticipation. I like ruins because they are relaxing, there is none of the expectation to perfection and function, they are buildings on vacation. Monuments are kind of useless in a similar way, though perhaps more like wedding guests rather than tourists.

Your two projects Crash Pad and Feeder refer to two different aspects of Greek history—the Ottoman and the “modernism” of ancient Greece. How much of your work explores the current situation in Greece?

It’s kind of inevitable because Athens is the one city in Europe where the financial crisis was physically visible. I guess I’m always affected by what’s around me, whether that’s how the internet changes the way we behave or the city I’m living in, so it’s a natural reaction. Feeder, which later evolved into CrashPad was just a way to understand the last 200 years of Greek history and how they brought us to the present situation. But somehow I have the feeling that Greeks are fed up with the crisis, and even though it’s still a reality, it’s time high time for escape.