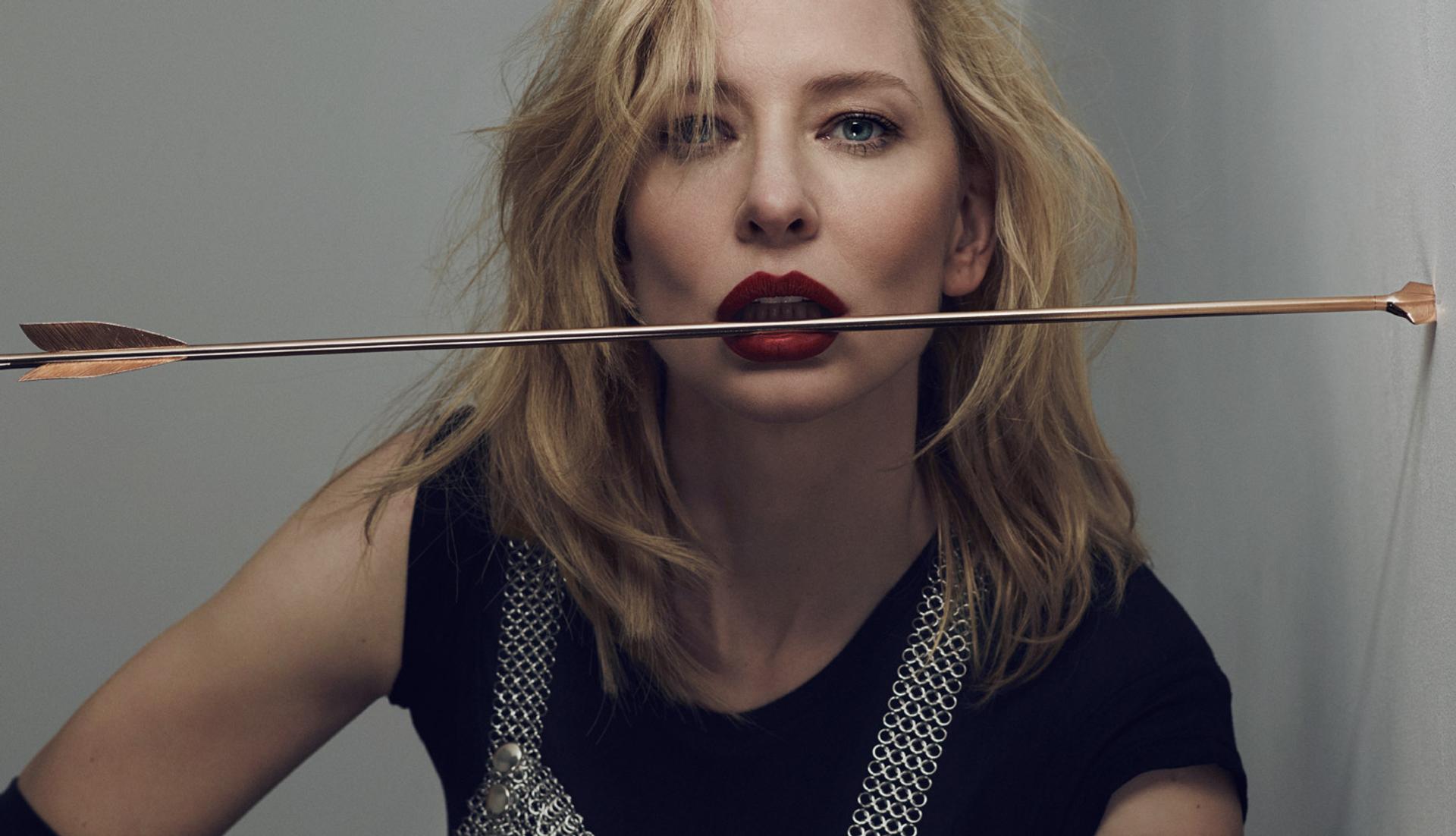 CATE BLANCHETT – erudite, pithy, inimitable – has a fluid attitude towards script and character. “I’m not an actor that says, ‘these are the circumstances I need in which to work,'” the 43-year-old Australian once revealed. “Every project, every different group of actors, dictates the way you work. That’s what I love about the ensemble: the way a group finds a way to work together.” The Academy Award-winning actor was recently in Berlin to shoot The Monuments Men, by George Clooney in which an Allied group, in a race against time, is tasked with saving art from the destruction by the Nazis. Accordingly, SEAN AND SENG photographed Cate Blanchett at the Sammlung Boros – a contemporary art collection assembled in a former WWII bunker. It was her day off from work, but we tied her back up.

CARSON CHAN & ED PAGINTON: The term “actress” seems to have been broadly overtaken by the term “actor” – what’s your take on the gendering of your work?”

CATE BLANCHETT: I didn’t really contemplate this until filling out a customs declaration form after leaving drama school and I had to state my profession. I instinctively wrote “actor” – it’s a less frilly, less Edwardian sounding word. On top that growing up, adolescent histrionics were always described as being an “actress” – so to be an “actress” seemed, rightly or wrongly, to have pejorative overtones. As for the gendering of my work – I hardly think of it at all. Even then, only in terms of the type of woman or man I happen to be portraying. Recently, I have had several conversations with directors about flipping the gender roles from male to female without changing any of the dialogue or the actions of the character, or indeed the response of other characters to them. Often when people write for women on screen, by default, they write more sympathetically and blandly and I think that’s a shame.

You played Bob Dylan in I’m Not There (2007). Were there revelations in that? We heard that you dressed in men’s clothing throughout high school.

“Call me old-fashioned but acting is not selling an audience snake oil – that’s the marketing department’s job.”

Yes. I love a well-cut men’s suit. I do. Playing a version of Dylan was utterly liberating, because of the spirit of the piece really. The film fell over at least three times while we were making it and we all threw the spare change we were earning right back, making it stay afloat. Todd Haynes is a glorious, outrageous filmmaker whose synapses have been uniquely misconnected. I think we all wanted a piece of his universe as much as we did a piece of Dylan’s genius, but honestly, a sock down my undies and being way too skinny clinched it for me physically. That, and Highway 61 Revisited (1965).

The desperate, the deviant, the withdrawn, and the anti-hero: these are just a few among the many character traits you’ve inhabited. What, in the past, has drawn you to these qualities?

I didn’t know I was drawn to them. That’s an interesting line. It’s always easier to draw these lines in retrospect. Perhaps the satisfied heroic conformists are slightly less dramatically interesting figures?

What do you see when you watch yourself in films?

I prefer to watch myself as seldom as possible. It’s always endlessly disappointing – the distance between what one imagined took place, what one dreamt, or hoped was captured by the camera, and what was actually captured. No matter how much one invests in a moment or attempts to craft a character’s response, in order to make it live on film you have to abandon the control of its interpretation. You are lucky if someone besides your agent and your mother sees the performance, and you’re luckier still if they even remember it.

“Sex sells,” as the cliché goes. Do you feel that women in film are constantly objectified? Should we be sexualizing men?

Sells what? What sort of sex? Consensual? I don’t understand the question to be honest – it presupposes that women are unwitting participants in some tragic filmic game of roulette and that it would make them feel better if men were forced to join in. Filmmaking isn’t a gulag. No one forces you to become an actor and being an actor in the wonderful, non-degraded sense of the word is still a fascinating and exciting way to spend one’s time. Call me old-fashioned but acting is not selling an audience snake oil – that’s the marketing department’s job and they are welcome to it. But yes, the erotic potential of cinema is powerful, as is its political and cultural power. And let’s not forget the funny, the power of the absurd.

To some extent we’re all acting in our daily lives, no? On an amateur level? Have there been moments where your personal agenda has slipped into your professional one?

Oh yes. That spillage gets a bit smelly.

Of course when the space between acting and non-acting closes, you could say we get reality television. Would you ever experiment with the form?

Do you mean experiment with the so-called “reality” of “reality television?” Isn’t James Franco already doing this?

You were awarded an Oscar for your portrayal of Katharine Hepburn in The Aviator (2004) when she was still alive. Generally, was your allegiance towards her biographical history, or to the narrative?

Actually she passed away as I was en route to film in Montreal. Possibly the idea of watching me portray her pushed her over the edge? My allegiance is always with the story, the fiction I’m part of. Films are not real. Never were.

This is your final season as Co-Artistic Director at the Sydney Theatre Company, and you’ve expressed the importance of theatre in its relationship to everyday life, in how it addresses the extremes and the dangers that are sanitized in society. What makes the coexistence of actor and audience in the same space so potent?

Theatre: the making of it, the consumption of it, at its best has an aspect of the ambulance chase. It’s walking the precipice of an imminent disaster, the crash, the missteps, the cock-up, the collapse. That energy and secret hope in the audience has to be harnessed; it’s crazy not to. Anything live, and truly “alive” will contain seeds of danger. Audiences love and hate to have the so-called “mirror” held up to them. In Germany, in particular, they expect and demand it. The real challenge is finding out what one can say that is fresh, unpretentious, and necessary. It’s a dialogue after all.

You had academic theatre training in Australia. Do all the theories and methods you learn go out the window once you’ve been at it professionally for long enough?

Theory is there to be fucked with. It has to be fucked with, disregarded, challenged, argued with, tossed out, and rebelled against. But I do believe you have to know what it is you are disregarding or working in parallel with. The study of various disciplines and methods was revelatory for me. It gave me starting points – let’s face it: life rafts – for when I left the hermetically sealed environment of drama school. Do I use them now? No, certainly not consciously. No one is interested in seeing my homework. In fact one has to assume that no one in interested in seeing me full stop.