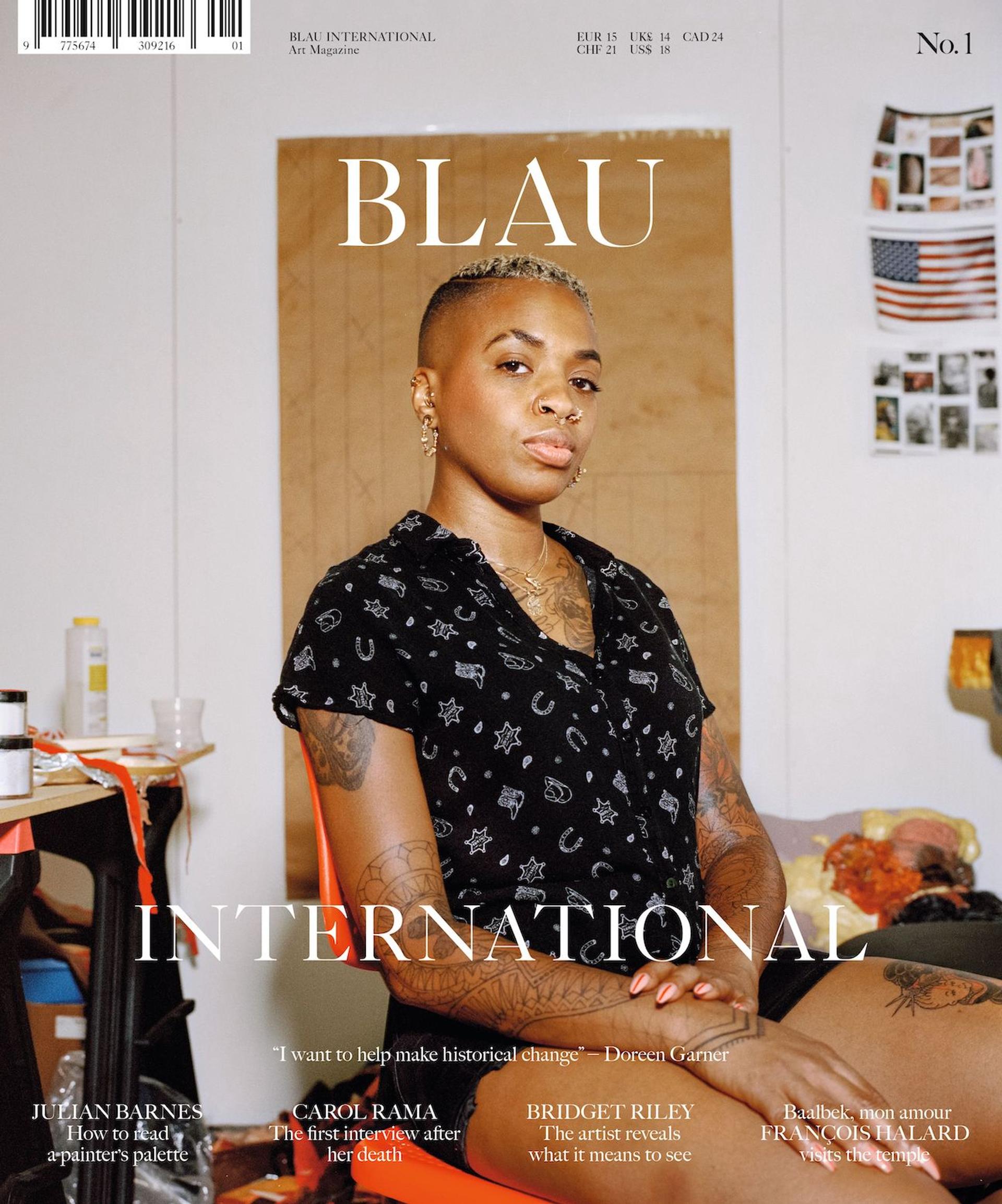 This October, Blau – the German-speaking world’s highest-circulation art magazine – launched its English-language version. Initially created as a supplement to Die Welt and published six times a year, Blau has over the past five year cemented itself as a reference point for art journalism – a reputation which Blau International is now seeking to expand by broadening both its linguistic and editorial horizons, with the inaugural issue including a fashion story shot by Brianna Capozzi and styled by newly appointed fashion editor Marie Chaix. With an ethos at once celebrating the decadence, novelty and timelessness of artistic expression, Blau International remains nonetheless true to its original ambition. “We believe in the transformative power of art, that not everything is interesting and urgent, and that you needn’t speak with everyone and be everywhere,” says editor-in-chief Cornelius Tittel. “We consciously run the risk of missing out on the occasional shooting star born after 1989. But that leaves us time to take a new look at old masters.” We sat down with Tittel in Blau’s Berlin Kurfürstendamm offices to talk about the raison d’être of his latest publishing pursuit.

Before getting to the international version, could you tell me more about how the concept of the magazine first came about?

I came from being the editor-in-chief of a German art magazine called Monopol. Then Axel Springer made me deputy editor-in-chief and head of arts of Die Welt and Welt am Sonntag, the daily and Sunday newspaper. When I started in 2010, one of the first things I had to think about was the 20th anniversary of the German reunification. To celebrate that, I asked the painter Georg Baselitz, the most German of German painters so to speak, to take over a whole issue of Die Welt, to basically come up with a new body of work to place on every single page. This issue turned out to be the most successful in years, with people buying several copies to collect, read, gift away. Of course this had to become a series, with Ellsworth Kelly, Gerhard Richter, Cindy Sherman and Christopher Wool taking over in the following years. I think five years ago, on the night we celebrated Cindy Sherman and Glenn Lowry did the dinner speech for her, my CEO went overboard and declared we should now start an art magazine as a supplement to Die Welt, as a generous gesture to our readers, something really serious and niche but for a big audience. That was the birth of Blau.

When did you first start contemplating the idea of an English-language magazine?

I think the outlook of Blau has been international from the very first issue. Back then we had François Halard photograph the normally off-limits Seconda Loggia of the papal palace at the Vatican for us, with the corridors and ceilings painted by Raphael. We felt that was quite a scoop, and it was only possible because our author Martin Mosebach was great friends with Pope Benedict. But then you flicked through, and the next story was the first studio visit Christopher Wool had granted a magazine in years. Or the only Q&A Miuccia Prada gave on the occasion of the opening of her Fondazione. So even back then, people would often ask us why on earth we would waste all this material by only making it accessible to a Germanophone audience. Well, we would not have called it wasted, as of course we are German and the publishing house that pays us is too.

So what made you go international now?

First, the feedback which we had from the beginning – people telling us that with this mix and content we would easily be their favorite art magazine, if only they could read it. Second, the squeezed market for daily print newspapers like Die Welt, which our business relied on. But I have to be honest: some friends at leading fashion brands in Paris and Milan were also very encouraging. For example we were lucky enough to do the launch of Blau International at the Musée d’Art Moderne in Paris, together with Gucci. Finally, our friends can read the publication they support.

It’s true that German publishing is very hermetic. Do you think the change will also affect the typology of the readership, beyond the quantitative change due to the breaking down of a linguistic barrier?

The readership, in the way I perceive it, is no more than ten people. Personally, if I do a magazine or a project, I have ten people in mind of whom I think, “they would really find this interesting.” I include myself in this and the very small editorial team I rely on. We’re just trying to make a magazine that we would love to read.

People who are bilingual or trilingual say that the ability to switch from one language to the other tends to trigger different aspects of their personality, different ways of expressing themselves. Do you think this will affect Blau? Will English enable you or encourage you to touch upon more topics, or address them in a different way?

I haven’t thought about it very much, because some of the most prominent contributors we’ve had in past issues over the years wrote in English anyway – their pieces had to be translated. In every issue we had something written in English that we had to translate into German. And of course we all grew up on English and American magazines, so sometimes even for us it seems easier to come up with a catchy headline in English than in German.

I think I was mostly referring to the topics or areas covered, for instance I noticed that Blau International has fashion content, and you even appointed a fashion editor. How did that element come into play?

Our mix is not crazy different from how it was before: we have old art, new art, a bit of literature, a bit of interior photography. It’s basically what we did before, plus, indeed, the fashion element. I think we do it in a way that feels authentic, not like “an art magazine trying to do fashion,” but rather something that blends in very organically with the rest of the issue. Or roughens it up a bit. We are thrilled to have Marie Chaix on board for the fashion editorials. From all the stylists I have been following in the past years and who have really developed their own voice she seemed like the natural choice for us.

If you look at the first issue of Blau International, what is the mix that makes it unmistakably Blau?

Oh, I did an interview with the dead artist Carol Rama through a medium in Torino. My piece is basically the transcript of a séance, after which I badly needed two Negronis in a row. You have to read it to believe it. Or not believe it. We have Julian Barnes, one of my all-time favorite novelists, explaining how to read a painter’s palette. Frederic Schwilden crashed the official holiday residence of Albanian prime minister Edi Rama, who also happens to be one of the country’s leading contemporary artists. And of course Sylvester Stallone, who wrote that incredible piece for us about how a painting by Peter Paul Rubens changed his life and made him start working out when he was 12 years old. Jamie Hawkesworth’s homage to Bridget Riley is equally surprising, followed by a super scholarly essay by David Salle on Giorgio De Chirico, the original postmodernist, as Salle calls him. That whole mix is pretty Blau to me.

This idea of not sticking to rigid categories – only art or only fashion – seems particularly relevant in Berlin. In most other capitals, the art scene, the literary scene, and the fashion scene tend to be quite isolated from one another. In Berlin, they all tend to be a lot more intertwined. Could the magazine have taken the same progression in a different city?

I don’t know, because I never lived for a longer time in a different city. All my working life has been in Berlin, so I never really thought about this interdisciplinarity or interconnectedness between the creative branches. Of course, it’s an art magazine from Berlin, but it’s not really a Berlin magazine like 032c, for example, was from the beginning, with this brutal elegance which was and is very Berlin. Everyone reading it, from Tokyo to London would read it and get a sense of Berlin. I love that about the magazine – but you can’t really say that of Blau International.

That’s true, but there are also different ways of representing Berlin. 032c has its own signature, which is maybe more overt, but maybe Blau does it in more subconscious ways.

I guess it’s even more true when you think about the 1920s. I feel like the mix in Blau is somehow a bit decadent: there’s great contemporary art, but we also published the pornographic drawings of Yves Saint Laurent – and then for half a year we had the lawyers of the Fondation Pierre Bergé/Yves Saint Laurent who were really not happy with it. But I felt that this encapsulates the spirit of the magazine quite well: the erotic gay drawings of Yves Saint Laurent followed by a very serious studio visit and interview, and a rediscovery of some forgotten early modernist. This might be a Berlin mix – perhaps subliminal, not conscious. I feel we could have done a similar magazine in the 1920s. Our headquarters, the former private apartment of our late publisher Axel Springer, also give that feeling.

What was the biggest challenge in setting up this new chapter for Blau ?

It was all very short-notice, and quite a hectic time to get all the advertising and the promotion. We had to hit the ground running. But it was very easy to convince people to support us because we already had over four years under our belt. That was super helpful, and having Mike Meiré as our art director reinforced the feeling that it would turn into something good. From then on, it was really organic.

How do you see the magazine evolving, and what do you hope it achieves that it hasn’t achieved so far, direction-wise?

I think the direction is already there. I just want Blau International to become a classic, and that people can hold in their hands four of five years later and have it feel as fresh and relevant as when they first purchased it. It’s a quality that a few magazines have, one of them being Fantastic Man, for instance – you can read an issue from however long ago and it will feel just as new and contemporary. The year of release shouldn’t matter; if the magazine is great, it defies trends. If we achieve this, I would be very happy.